Rapper Talib Kweli Greene is on day 3 of an anti-Kirk Minihane Twitter diatribe. Greene, who has over 1 million followers on Twitter, has sent hundreds, if not thousands, of tweets since Friday accusing Minihane, Dave Portnoy, various Barstool employees, and many Minifans and Stoolies, of being vile racists and sexists. 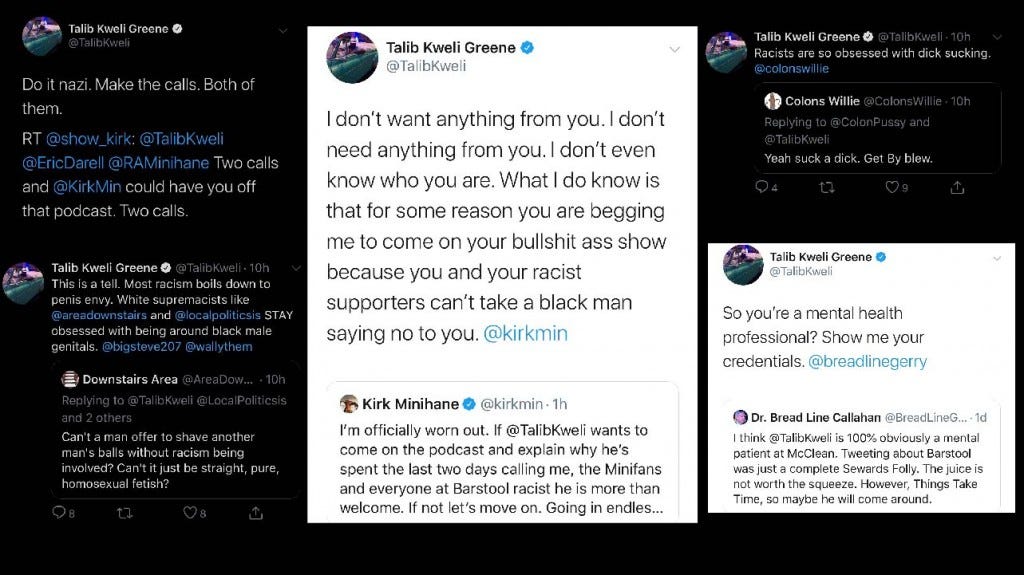 It all began when Wally the Green St. Monster, a parody twitter account for the Woo Sox mascot, asked Greene why he was down on Barstool. "Barstool Sports is sexist and racist," he tweeted, without elaboration. As is tradition at the Kirk Minihane Show, we asked him on for an interview because it looked like we could have a debate. Greene responded by accusing us of trying to "hijack his platform," but the fight escalated pretty quickly.

RT @DanToEarth1: @TalibKweli@kirkmin Alright. I’m calling bullshit. Who is this troll on twitter calling himself @TalibKweli and what did he do with the guy on the people’s party podcast. That guy is cool and does a great job interviewing and asking good questions pic.twitter.com/wpttPsxRvz — Talib Kweli Greene (@TalibKweli) December 16, 2019

As of this writing, Greene has accused Blind Mike of harboring secret gay lust for black men, called Minihane a nazi and white supremacist, and demanded to see the medical credentials of a Minifan parody account that suggested Greene was actually a figment of Minihane's imagination. The whole episode is so strangely bizarre and weird that all you can ask is, what the fuck is going on? Are we living in a simulation? Why is he still tweeting? Why does he have over one million followers and almost zero engagement on the majority of his tweets? On today's Kirk Minihane Show, Minihane responds to Greene's accusations and tries to make sense of it all.