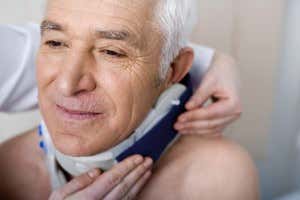 Federal agents busted one of the largest medicare schemes in history on Tuesday.  The scheme, which targeted elderly and disabled persons on medicare, involved shady doctors, who were getting bribes from medical equipment companies to write fake prescriptions for knee, back and neck braces that patients didn’t actually need.  Telemedicine companies would call up people known to be on medicare, tell them they could get them braces they didn’t really need, then would bill medicare after the braces were delivered.  This will cause YOUR healthcare premiums to go UP, and you should be outraged!!

Headline Says It All 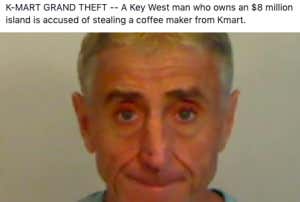 Andrew Lippi, who just bought an 8 Million Dollar private island off the coast of Key West, is being charged with grand theft in Florida, after returning products to K-Mart (yes a few still exist) that contained nothing more than bullshit.  The man, who was attempting to fill his new home with necessities like a new Keurig machine, was returning the boxes of these items for refunds, but the kicker is the boxes didn’t have those products in them.  Florida should really up their qualifications for “grand theft”

- Everyone forget all the opportunities Johnny Football carelessly blew over the last six years. Johnny’s dead, he died… and like a Phoenix rising from the ashes – meet John Football. All is forgiven.
-Aunt Becky is probably going to jail for bribing her ridiculously hot daughters into USC.
-A 34-year old professional gambler set the new record for the largest single-day-cash-win on the game show Jeopardy, taking home over $110,000. Unfortunately for him even $110k isn’t enough to make a know-it-all degenerate gambler lovable.