Not sure if you have heard, but it’s cold in Chicago this week. Really fucking cold. Colder than Antarctica. You probably saw something about it in your local newspaper. I have a little confession for you though…it hasn’t been that bad. I have the heat turned on and I haven’t left the house. There’s a scent of stale farts that have been lingering, but overall as a person with a roof, heat, and food purchased in advance…it’s been fine. I think that is most of us. Stay home, use the extra blanket, start drinking at 1pm, start streaming netflix around 3pm, mix in a nap and food. Not the worst life.

Except…I’m the moron who decided it was a good idea to move this week. Super Bowl weekend, in Chicago, during winter…I played myself. I am an idiot.

On Redline Radio this week your boy, @BarstoolCarl, had a GREAT tip for moving. You call up your cable and internet supplier of choice and if they give you any shit about when that installation can take place then you just tell them that you are operating a small business and it vital to the success of your business that the internet be functional. Happy to report that I’ve already put that tip to use and it “worked”. The quotation marks are there because while I have ordered and paid for cable and internet…the router, cable box, and everything I actually need can’t be guaranteed to arrive…and neither can anything else because of the Polar Vortex.

No couch(Burrow, valued sponsor, if you’re reading this hit me up)

No mattress(Leesa, valued sponsor, if you’re reading this hit me up)

Everything is stuck in transit somewhere and can’t be delivered on time and I have nobody to blame but myself because I chose to move during this weekend.

I LOVE the Super Bowl. Doesn’t matter who is playing. I get up, watch NFL Films Super Bowl highlight recaps and “America’s Game” all day long while I cruise through my app looking for prop bets I like. Get chili cooking on the stove, pop some delicious baked chicken wings and drummettes in the oven and enjoy my life. It’s was my singular goal to have my place ready for that and now…can’t.

I have two options.

1) GF’s friends are hosting a party. They’re lovely people, but they’re the type who don’t give a fuck about the game or gambling or anything. The main point is the social element. People will be having conversations and not giving a fuck about Tony Romo squeeling or predicting plays. It’s also a “dip party” again…I love dip. I don’t care about dip or the conversations about everything besides football. Watching the last football game for the next 7 months with 8 people who don’t give a FUCK about football…not great. Love them, but not great.

2) Watch the game at WSD’s palacial estate. Not the worst option. WSD is walking distance from me, but with the Polar Vortex going on and the previous reference to stale farts lingering…not the ideal situation to be watching on premium green pleather that he found on craigslist. 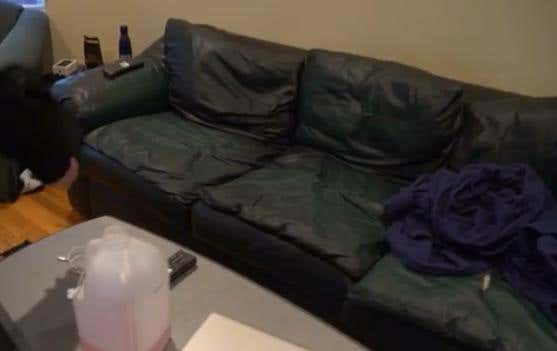 I want to hear about your worst moving related experiences. Did it cost you your ability to enjoy the Super Bowl? Did you have to watch the game with your podcast co-host who was constantly spitting dip into an old gatorade bottle? Moving is always an annoying experience, but this year it’s costing me the super bowl and there’s nothing worse than that.

PS: There’s a lot of things worse than that. I can believe how amazing real people have been in Chicago this week. Real people as in people who need to do their jobs in order for the rest of us to survive.

The people who showed up in the middle of the night fix a broken main or mains…plural.

These people amaze me. These are jobs that I could NEVER do in a million years.