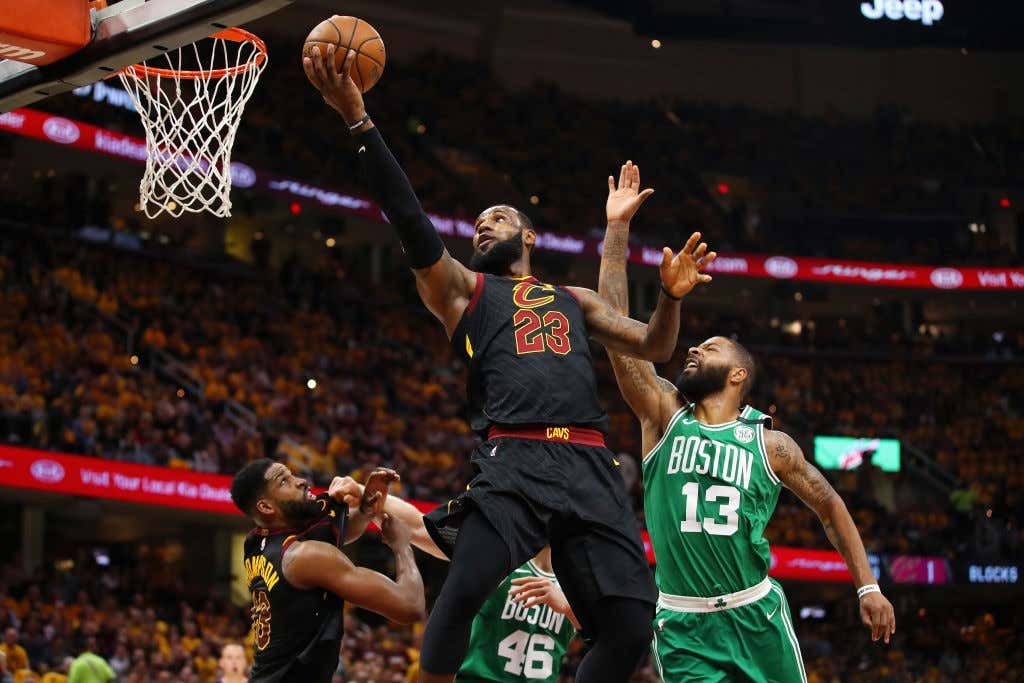 The one thing I’ve always tried to maintain with this blog is consistency. When things are going great and the Celtics play well, we celebrate together. When they play like complete assholes and get curb stomped, the blog doesn’t go anywhere. We sit here and take it. We let the opposing team’s fans give us shit because we as Celtics fans certainly talk shit when things bounce our way. This is one of those dark times. The performance we saw from the Boston Celtics was not only pathetic, it was embarrassing. I’d love to say it was the first time we’ve seen this type of effort from them this playoffs, but I would be lying. This was nearly the exact same performance we saw in Game 3 against MIL, and I’m not being over dramatic, they are almost identical.

How does that stack up to last night? Well, CLE had 116 points on 48/50% shooting, made 17 3PM, and forced 15 TOs. The Celtics, finished with 86 points on 39/27% splits, 6 3PM, 28 FTA, and 15 TOs. Everything from the actual production to the energy level was almost exactly what we saw this team do earlier, in what was really their only bad performance thus far. To say the Celtics got what they deserved would be accurate, because for whatever reason they came out and played the exact opposite of what we’ve seen this series. Interestingly enough, while looking at all the possible reasons this game went the way it did, I noticed a trend. Perhaps it’s as simple as whoever hits their unguarded shots is going to win this series. In Games 1&2, the Cavs shot 41% and 30% on their uncontested shots, . Last night, the script was flipped, with the Celtics shooting just 35.6% on their uncontested shots, while the Cavs made most of their open looks at 54%. Shocker, guys shoot better at home.

And just like that, despite still having a 2-1 series lead, I was told this series is now over. I guess the Celtics had to sweep or something I don’t know, but this is what I expected. Every time the Celtics play like complete shit and lose a game, people freak out. Last night was awful, and the Celts deserved everything they got. It had been weeks since we’ve seen that sort of team, and frankly I hope to never see them again.

Now that we have that covered, we can continue.

– Look when the entire team plays like they’ve never even picked up a basketball before, you have a lot to choose from. Let’s start with their approach right from the start. If I could sum up how the Celtics played in this game, it would be rushed. Everything seemed rushed, especially in that first quarter. During those 12 minutes, 11.8% of the Celtics shots came with 22-18 second left on the shot clock, and guess what they missed every single one of them. In no way did they make the Cavs defense work, and then on the other end, 26% of CLE’s shots in the first came with 7-4 seconds left, which they then shot 50% on and 66% from deep. Basically the exact opposite. They took their time and exploited areas in which the Celtics defense struggled. This was frustrating because for the entire playoffs, the sweet spot for the Celtics has been that 15-7 second mark, but for whatever reason we were left with shit like this

It’s no surprise that when you take nothing but rushed shots to start a game, start 2-9, and play no defense on the other end, you find yourself in a deep hole. Maybe this was just one of those nights where the shots weren’t falling, it happens to everyone right? What I hated about this was the Celtics really only play this way on the road. There’s nothing but isolation, which by now we all know is the kiss of death. Where was the ball movement? Where was the exploiting mismatches with your wings? Instead we got nothing but hero ball and I find that unacceptable.

– Under no circumstances it is acceptable that Al Horford has just 4 FGA in this game. He did not take a shot in the first quarter. Part of that is on him, he didn’t exactly demand the ball, but part of it is also on Brad and his teammates. Terry and Morris took 9 of the 18 FGA in that first, while no other player took more than 2. I would think that in a big road game you want want some of your more efficient scorers to get an opportunity, but Horford/Tatum/Brown had a combined 3 FGA. I put it in the blog before the game, for whatever reason when the Celtics go on the road they play through their inefficient scorers and the team struggles. At home, it’s the opposite and they flourish. Why is this so complicated?

– Watching them play, and this is something Brad mentioned postgame, they didn’t look connected. It was almost as if they started to get down, and instead of working together to bring the team back, everyone just went to their own shit. They lost their focus, had awful turnovers, and tried to make up a 20 point deficit with one possession. I hate when the Celtics play like that because we’ve seen time and time again that this style of play is ineffective. They honestly played as if they just expected the Cavs to fold given how the first two games went, and all that happened was they got punched in the face and in no way responded. Very frustrating.

– Any time you can have a largest lead of 0 points, that tells me things didn’t work out all that great.

– Main rotation players not named Jayson Tatum went a combined 17-48 with 11 of the 15 TOs. My issue with all these guys was not only their energy, but their shot selection. Sooooooooooooo many long contested jumpers 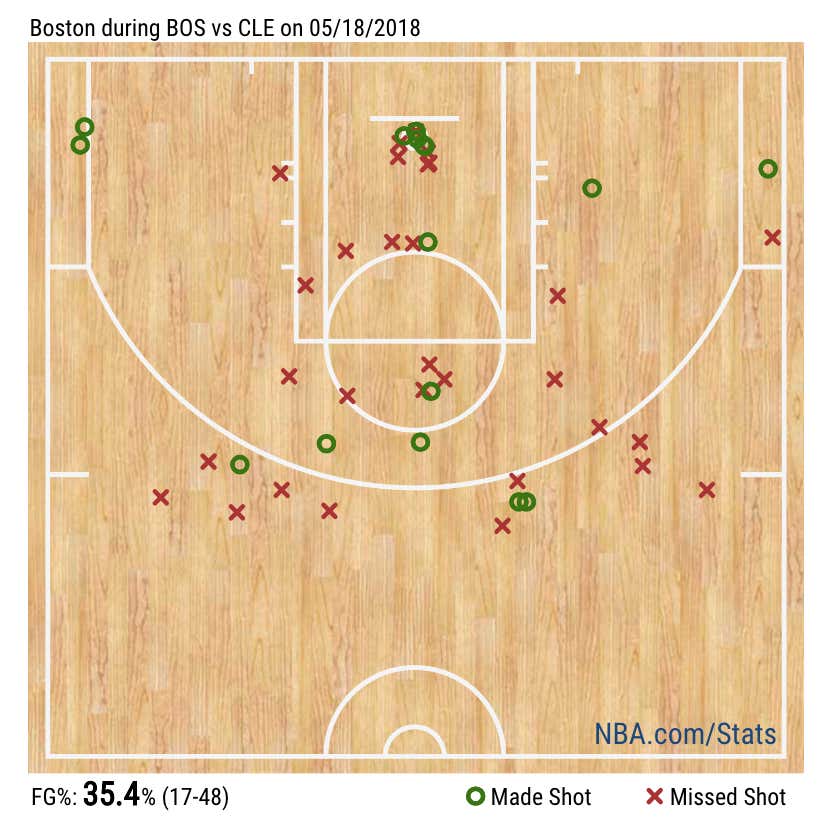 It didn’t help that Morris and Rozier couldn’t hit a shot in the paint either. As a team the Celtics shot just 41.7% in the paint, and their two main shot areas were midrange (16 FGA 37.5%) and the above the break three (16 FGA 18%). For a team with streaky shooting, this probably wasn’t ideal.

– Anyone who ever tweeted or called into a radio station and suggested that given how the team was playing earlier in the playoffs that they should entertain the idea of trading Kyrie/Hayward can kindly shut the fuck up for the foreseeable future.

– This section is where I feel like we should start with the defense, or should I say lack there of. As pathetic as the Celtics were offensively, we’ve seen them pull out wins anyway because of their elite defense. Well last night was anything but elite, in fact it was down right pathetic. Not only did they not guard the three point line, giving up the most 3PM of any game this entire postseason as the Cavs went 17-34. Korver/Lebron/JR combined to go 10-11 from three. You may say to yourself “well that won’t happen again” but the same could be said about how poorly they shot in Boston. The Celtics had to know these guys were going to come out blazing and shoot much better, and some of the lazy perimeter defense we saw makes me want to puke.

Looking at the individual matchups, it’s not pretty. We’ll start with Jaylen, who not only had a tough night of foul trouble, but even when he was out there, things weren’t great. Cavs went a total of 8-12 while Jaylen was the primary defender. Next up, Marcus Morris wasn’t all that better. With Lebron going 5-9 against him, he ended the night with all Cavs shooting 6-10. Smart held guys to 4-7. Horford 3-6. You can see a trend here right? Everyone was scoring on the Celtics defense.

My issue is not just that whenever the Celtics decided to play defenwe that the Cavs still scored, but that they really didn’t even contest all that many. Of the 76 FGA by CLE last night just 30 of them were contested by the Celtics. You’re asking to get your ass kicked if you continually give NBA players wide open looks. Very, very uncharacteristic of this group.

– Not scoring more than 24 points in any quarter proved to be problematic. Duly noted.


Staying true to their brand, the Celtics continue to not just take the easy path. Now, if I had to guess they’ll get a nice little Foster/Brothers pairing combined with a confident Cavs team on Monday. They had their chance to really put the clamps on the Cavs, and instead they shit their pants. A pretty bad time to have one of your worst performances of the entire playoffs, and now things get 1000x harder. Yes you still have a 2-1 lead, and yes technically you do not need to win on the road to win this series, but that doesn’t excuse the effort and lack of execution we saw in this game. The talk after the game was that this was the wakeup call the Celtics needed, that they needed to get their ass kicked to restart their focus. I don’t love hearing that to be honest. That may be fine for a random stretch in January, not when you are trying to take down the best player on the planet and on the verge of making the Finals. I trust Brad will have them much more ready to play Monday, but there is no denying what we saw last night. The Celtics should be as embarrassed as I am. 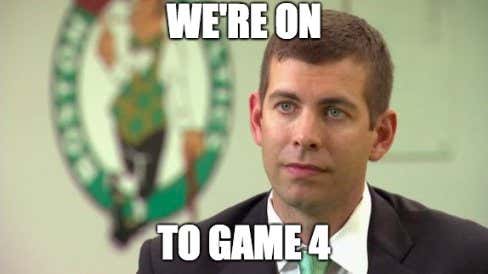