There’s getting your shit pushed in, and then there is whatever the hell we just watched. We’ve seen the Celtics play poorly before, but what we just witnessed was a complete and utter embarrassment. It’s hard to decide what the worst part of this disaster was. Was it the gameplan or the execution? Right from the jump the Celtics did exactly what I was hoping they wouldn’t. They played like assholes. No flow on the offensive end, rushed threes, no ball movement you name it, if it was the opposite of a good basketball decision that’s what the Celtics did. You add that to the fact that the Cavs were obviously going to play better at home, especially the non-Lebrons, and results like this happen. It may have been all fun and jokes to talk about how the Cavs were dead after the first two games, but this game was a classic example of why that was all a little silly.

The thing with the Celtics, when they play poorly it looks REALLY bad. It’s as if they are a collection of players who not only have never played with each other before, but also as if they haven’t even played the sport before. I don’t know how you could look at this performance and think this in any way resembled the team we saw in the first two games. That’s the frustrating part for me, they have the blueprint. They know how they have to play to beat this team, and then they came out rested and tried something completely different. It’s hard to say what was worse, the offense or defense as both were extremely pathetic. The Celtics lost shooters, couldn’t stop fouling and played with negative energy. In my opinion they lacked the fight that has come to define them. Normally this team gets down early and fights, instead it seemed like they gave up. When you’re taking ill advised jumpers early in the shot clock on one end, and then don’t play defense on the other, that’s exactly how you get blown the fuck out and give the Cvs life.

To be honest the Celts haven’t played this poorly on the road since Game 3 against MIL. That’s what this game felt like to me. We know how that series ended, but this is a different beast. The good news is I don’t see how things could be any worse moving forward. The goal of this trip was to split, and that’s still on the table. That of course is under the assumption that the Celtics will remember how to play basketball and actually play defense. Allowing five Cavs to have at least 3 3PM is inexcusable, and that’s the type of shit that is very out of character for this team. Hopefully the Celts use this as a wakeup call and understand that the second you slip up against a Lebron led team, you’re in for a long night.

It’s only fair both teams get at least one game where you get to enjoy a 20+ win, so now that the Cavs got theirs we can forget all about this disaster. I can’t believe we waited all that time just to see the Celtics shit their pants. I think at the end of the day that’s what makes me the most mad. 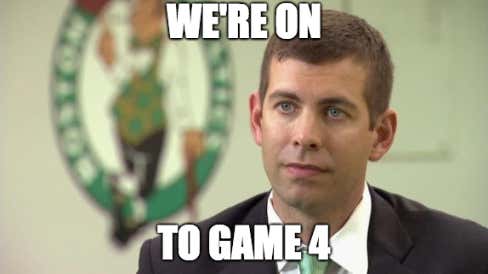