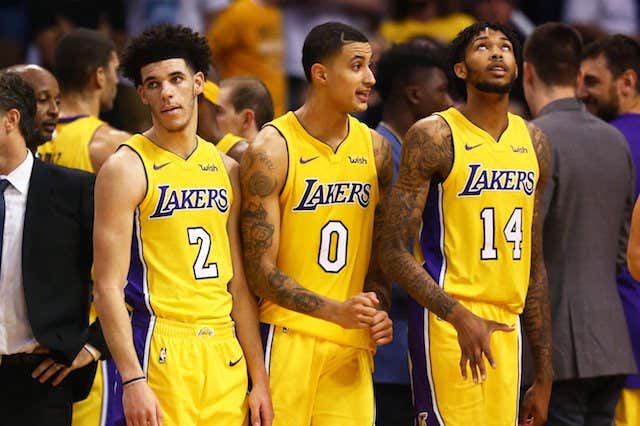 Suns GM says they are open to trading the No. 1 pick

This is a big time longshot to happen, but the Ryan McDonough putting it out there that the No. 1 pick is on the table. What that essentially means is they will be just seeing if any of the potential superstars on the trading block can be discussed around that pick. We know that Karl-Anthony Towns and the Wolves are currently not in great shape, the Anthony Davis rumors have swirled for years and then there’s Kawhi Leonard and the Spurs saga. Do I think it happens? No. But, it’s a starting point for some trade discussions. Remember, this is also the first time in Suns history that they had the No. 1 pick and are in the middle of a rebuild. You could see them go with Ayton (the correct pick in my opinion) and build around him/Booker/Jackson. No matter who they pick (assuming it’s either Ayton or Doncic) they’ll take a hit on the defensive side of the ball.

Speaking of the Suns, they also said they won’t take similar positions at No. 1 and 16

McDonough also said that they won’t take two wings or two bigs at No. 1 and 16. They want to take one of each preferably at each spot. To me that’s where it makes sense to take Ayton at No. 1. Remember that whole ‘help out defensively’ thing I was talking about? Take Ayton at 1 and then you assume either Zhaire Smith or Lonnie Walker are there are No. 16 to take a defensive-minded wing. Don’t overthink this.

Report says no one on the Lakers roster is untouchable

The Lakers are one of the more intriguing young teams out there. A large reason why is due to the cap space they have, but also with the group of Ball/Ingram/Kuzma/Hart they have a young core that looks like they can grow into something. I’m not sure if any of those four will be a top-10 player in the NBA, but similar to what I talked about with the Suns trading the No. 1 pick, they have the chance here to try and attract one of these top 10 players in Davis/Leonard/Towns. Perhaps if they can discuss a trade that really has legs or occurs on draft day they can then bring in a Paul George to pair with them.

To me the question is, which of the three teams are giving him this guarantee? It has to be Portland, Minnesota or Chicago. All three teams need some wing help, Chicago loves them an experienced college player and Hutchison really improved this year. Hutchison does need to improve his shot consistency but has good measurements with a 7’1″ wingspan that can help out defensively with versatility pretty much right away.