Kings stay kings and Pope stay Pope. Today is a real tough day for the people that say nobody cares about Mike Francesa. I guess if you live outside of the Tri-State Area, you may not care or get what Mike is all about. But for the 20 MILLION people that live here as well as the millions of people that grew up here and were smart enough to leave, Mike is a way of life. Yeah he can be a blowhard that will mumble, berate his callers, and create hours of dead air on live radio per year. But the fact is he moves the needle. He GETS THE PEOPLE GOING. And he must be walking around like Daddy Longdick after getting the red carpet rolled out for him by Twitter for his first tweet like many of the other Francesa gifs he hopefully learns of now that he’s on duh Tweetuh.

This is all so ridiculous, which makes it perfectly Mike. I mean this is the same guy that said athletes and reporters shouldn’t be allowed on Twitter and he would never end up on it.

There are countless celebrities, world leaders, and athletes that are on Twitter but didn’t get a request to send their first tweet at Twitter HQ NYC. I mean even internet moguls in charge of the hottest sports media brand on the planet is unverified and struck out at Twitter HQ once upon a time.

Meanwhile Mike’s handle was born with a blue checkmark, even though he definitely said “I’m not going on duh Tweeduh unless I have oneuhdoze blue checkmahks, ughkay?” 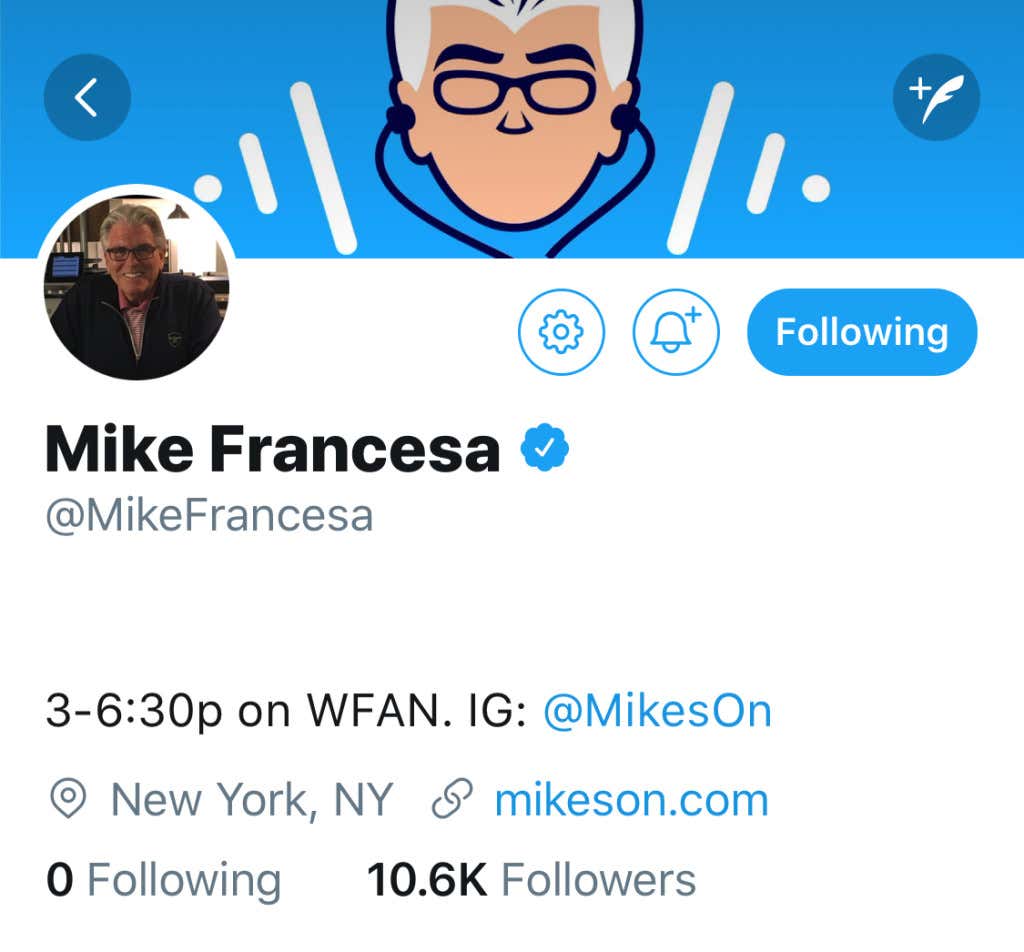 Following nobody is as Mike as it gets. At least Kanye follows Kim Kardashian. Then again, Mike broadcasts from the Mike Francesa Studio at WFAN. Can’t get more alpha than that. And shout out to the Pope for tweaking the iconic Numbah One image for his cover photo.

Now people are anticipating Mike’s first tweet like Catholics waiting for white smoke outside of the Vatican. Will it be a trademark phrase like “And we’re back?”. Will it be a tweak of the Mets? Will it be a plug for his app which will be the most revolutionary app in sports talk radio since Audio Roadshow changed the game.

I’m not an idiot though. Well I am. But I know that Mike’s Twitter usage will probably be what you’d expect from a 60-year-old millionaire with a full-time job and kids. Sporatic at best. But I’m here for all the growing pains. Mike falling for fake accounts tweeting trades or free agent signings and announcing them on his radio show. Or him becoming a slave to his notifications like everyone does. Those occasional moments of dead air are about to become graveyards of dead air.

And the cold takes. Oh the cold takes. Even though Twitter is free, Mike will likely put @OldTakesExposed kids through college with his mush predictions. 1 pm when Mike tweets his first tweet at Twitter HQ because Twitter asked him to cannot come soon enough. God damn this is all so fucking ridiculous. But you don’t get your first tweet treated like its the Game of Thrones series finale and a shirt like this made unless you deserve it.

Since I brought it up earlier and they are always so fucking good, lets watch some Francesa gifs until 1 pm gets here.