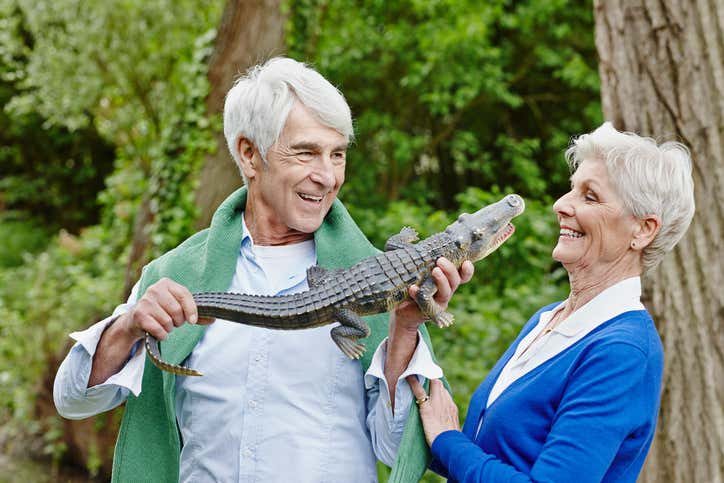 Source - A Connecticut woman got a disturbing phone call from her nephew, who told her he had been kidnapped and his abductor was demanding $800 or he would “burn,” the young man. While officers ran a trace, detectives told the aunt to demand that his abductors text her a photograph of her nephew.No one was prepared for what came next.

The photograph showed the 21-year-old victim lying face-down in a bathtub, a 3-foot alligator on top of him, its open mouth facing the camera.

“Titi, man, they got this alligator on me and they saying that if no money is given, they are gonna have him chewing on me,” the victim said in a follow-up phone call, police said.

Bridgeport and Shelton police would later surround a Shelton hotel, capture the creature and arrest 30-year-old Isaias Garcia, a convicted felon from Garland, Texas, on kidnapping, extortion and assault charges.

“It is an outrageous case, but it is clear from the evidence that this young man’s life was in danger,” said Bridgeport Police Lt. Christopher LaMaine. “This was no joke.”

Police said the victim had two burn marks, one on his face and the other on his right forearm. He told police Garcia had burned him with a barbecue-style lighter after tying him up.

On Tuesday, Garcia, who police said was previously convicted in Texas for aggravated robbery, pleaded not guilty before Superior Court Judge Robert Devlin to first-degree kidnapping, attempted first-degree larceny by extortion, unlawful restraint, third-degree assault and threatening. He asked for a jury trial. The judge continued the case to June 4.

Say what you want about Isaias Garcia but don’t say he’s not creative. Most kidnappers are out here using ropes and ties. Not Isaias. He’s moved onto bigger and better things: live reptilians. As flawed a plan as it was, I don’t hate the idea. Most people would rather have a gun to their head than an alligator on their chest. The problem is that a) the alligator was only three feet long and b) of all the reptiles, alligators are the easiest to escape from. The second the temperature drops below seventy degrees they’re slower than Stephen Hawking in a snow storm. RIP in peace. Relax, he had a good sense of humor.

Even if it wasn’t cold all he had to do was bench press it off of his chest and run in a zig-zag pattern. Pretty easy considering  it weighed only twenty pounds. I don’t know, maybe he’s never seen Crocodile Hunter?

I keep imagining him holding the alligator like a gun the same way Bill Hader did in Laser Cats.

If I was the kidnapper I’d have used snakes. The threat of venom is much more intimidating than an alligator bite. Any rate, I don’t know what’s more embarrassing the fact that a grow man was being held hostage with a baby alligator or the fact that it actually worked. If I was Titi I wouldn’t have sent the money either. Not after this phone call.

“Titi, man, they got this alligator on me and they saying that if no money is given, they are gonna have him chewing on me,” the victim said in a follow-up phone call, police said.

I think it’s safe to say the police won’t have to worry about any copy cat crimes. Glad he’s okay, though, death by baby Alligator would’ve been a hell of a way to go.