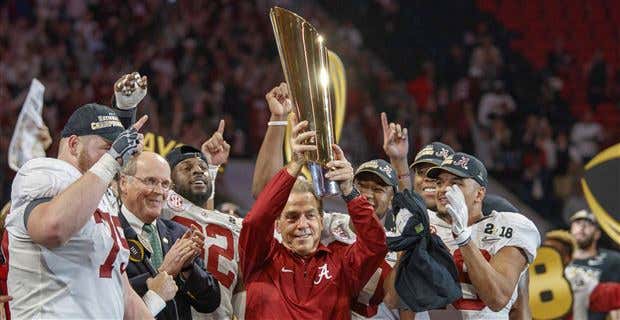 The story that NEVER dies is back. I, personally, can’t say I mind this at all. The off-season is longgggg and unless you are going to follow the latest recruiting news on a bunch of 16-year-olds announcing their “top 16 schools” on Twitter, something else has to occupy your college football brain.

On Tuesday, Nick Saban finally gave his thoughts on UCF’s claim that they are 2017 national champions:

USA TODAY-Nick Saban says he has “a tremendous amount of respect” for UCF’s accomplishment last season, because he knows how difficult it is to go unbeaten. But he’s not exactly aboard with the Knights’ claim on the 2017 national championship, either — not that you’d expect him to be.

“If you honor and respect the system that we have, (despite) some of the imperfections that you understand that the system has, then you wouldn’t do something out of respect for the system that we have,” Saban told USA TODAY Sports. “I guess anybody has the prerogative to claim anything. But self-proclaimed is not the same as actually earning it. And there’s probably a significant number of people who don’t respect people who make self-proclaimed sort of accolades for themselves.”

Yesterday, Nick Saban took his statement one bit further by not only shoving UCF in a locker but giving them a wedgie while he was at it.

Programs like Alabama and Texas have games in 2093 already on their schedule, so it was surprising to see these two schools find an open slot in two consecutive years so soon. Usually when two big name programs schedule a home-and-home it’s in the year 2032 and will feature players that are currently in diapers.

It turns out that Texas had to cancel a game in 2023 against a team that Alabama has heard a lot of from up in the peanut gallery the past few months:

Some may look at this as a coincidence. Others, who know how Nick Saban operates, imagine the Teflon Don of Alabama at his ring filled desk with a devious smile on his face: 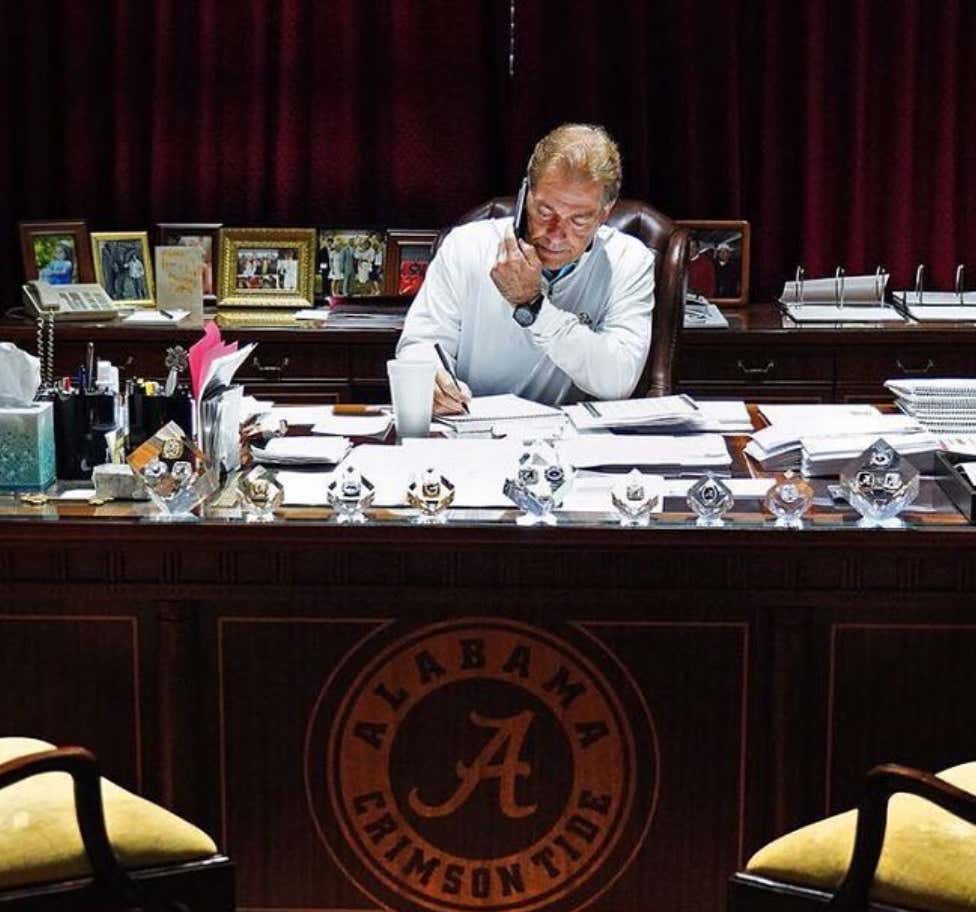 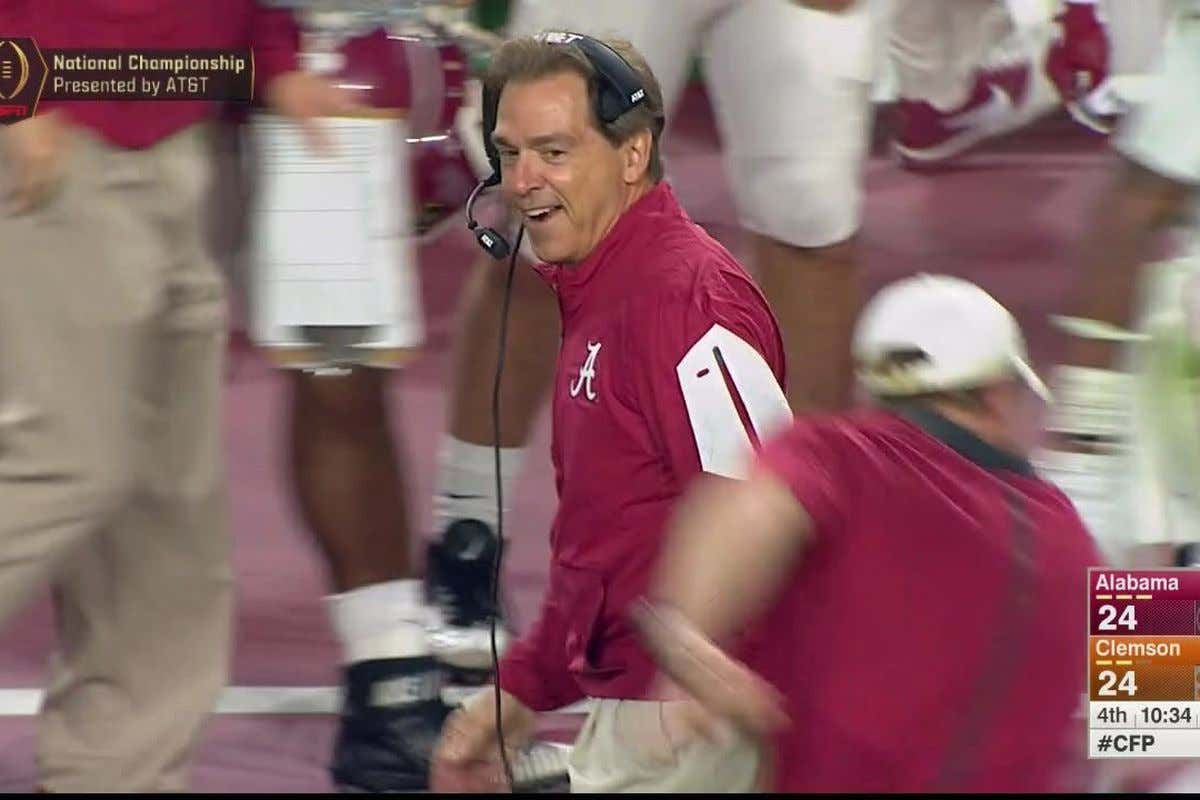 Weird that Frost gave this comment considering earlier this month he was quoted as saying:

247 Sports-“All I’ll say,” Frost told USA TODAY Sports earlier this month, “is if we had stayed there, I would have had a hard time getting behind it.”

He added: “At the end of the day, the Playoff system is that the national champion is the team that wins the Playoff.”

In Scott Frost’s defense, he is not wrong. Alabama claims to have 17 national titles, the most in college football history. Here’s the thing, I’m going to whisper when I say this so they don’t hear me down in Alabama, so come in a bit closer: Alabama has more like 13 national championships, not 17.

CBS Sports-The back story: In the mid-1980s during the Ray Perkins era, then-Alabama sports information director Wayne Atcheson added five pre-Bear Bryant national titles to the Crimson Tide’s media guide: 1925, 1926, 1930, 1934 and 1941. Alabama’s 1982 media guide, the last season for Bryant, listed 1934 as the only pre-Bryant national championship, thanks to a footnote of Alabama’s SEC history. In the year-by-year results in the 1982 media guide, only Bryant’s six national titles were listed. Once Atcheson made the changes, Alabama claimed 11 national titles.

Newsflash: people claim stuff from the past that never actually happened. In 60 years, I’ll claim I dated the three hottest girls in high school to everyone in my Boca Raton retirement community. What are they going to tell me? I didn’t? Where is your proof? Exactly, keep it moving, Gerry.

Although, bringing up the past is very petty of Scott Frost and UCF fans. Sports fans talk about the past more than any other topic, even if they have no real knowledge of sports history. 15-year-olds who have never seen Michael Jordan play more than a 45-second Instagram highlight reel will swear he’s the GOAT and you are an idiot for even comparing LeBron James to him! Heck, Yankees fans will yell in your face about “27 world championships” all day even though 10 of those 27 came in a time that black people were literally not allowed to play in the MLB (look it up).

Every time I finish one of these UCF national championship blogs, I say to myself “this is gonna be the last one, right?” and I’m always wrong. I, am, however confident in one thing: UCF fans will NOT like this blog. Most will not read the entirety of the blog, but instead, hop on Twitter and whip out one of their 3 favorite responses after reading the headline.

Option 3: It’s (insert date here) and you are STILL talking about UCF?

Nothing makes a UCF fan feel smarter than them thinking they are the only ones who recognize why UCF administration is continuously calling themselves 2017 national champs. Yes, we know why you are doing this. Yes, we are talking about it. UCF hasn’t come up with some master plan to seduce us into talking about their school. This is UCF we are talking about here. You may be the Harvard of Orlando, but that’s about it.

Has it worked? I guess? UCF is now the butt end of college football jokes left and right. They are still getting kicked to side of the curb by P5 teams. I mean maybe it will result in more people coming to your games?

Who knows, that may be too much to ask of your fans to sit in the empty seats living RENT FREE, BRO at Spectrum Stadium. 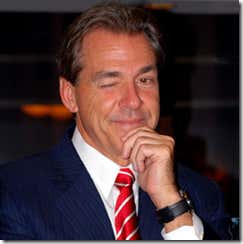