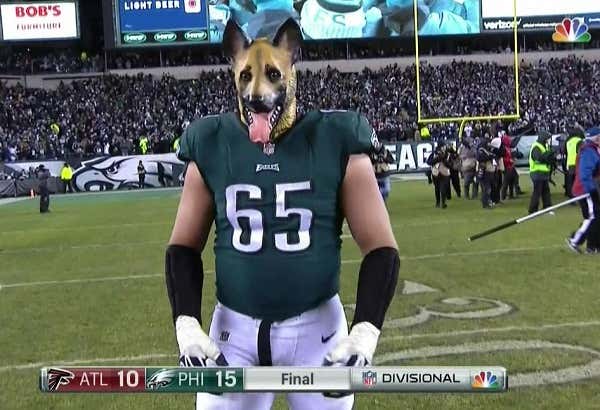 Source – It has been more than three months since Super Bowl LII, and Lane Johnson’s trash-talking of the New England Patriots is still going strong.

The Philadelphia Eagles right tackle took more shots during a recent appearance on Steve Austin’s podcast and revealed where some of the ill will stems from.

“Here’s what pissed me off,” Johnson said. “The Patriots, obviously, I respect their coach, I respect Bill [Belichick], I respect Tom Brady, but just because the way that they won the Super Bowls, the Patriot Way, is that how everybody else is supposed to do the same thing? No, it’s not. And that’s what I got mad at, the arrogance by them.

“There was obviously some stuff behind closed doors. Their owner talking shit to our owner. Bill talking shit to our head coach [Doug Pederson] before the game. I’m not going to say it, but a lot of shit- kind (of) built up to that, and I just got tired of hearing about it, man, to be honest.”

Dammit. He’s onto us. I could handle Lane Johnson going on PMT twice to call the Patriots a bunch of robots programmed not to have any fun or however he put it. I could chalk that up to the over-enthusiasm of a guy who just won a Super Bowl over the best dynasty his sport has seen in 50 years.

But now? Now he’s exposing the Patriots for the frauds that they really are, and this one is gonna sting.

Of course Johnson is right. Mr. Kraft and Belichick talk a good game in public. All respectful talk and taking the high road. But that’s all just an act by both of them. Get them behind closed doors and it’s all pure, 100 percent, military grade shit talk. There is no doubt in my mind that during some Super Bowl week media event Mr. Kraft posed for the cameras with Jeffrey Lurie and said all the right things. And then first chance he got he pulled his business partner behind a curtain and said “I’ve been to nine Super Bowls. How about you, brah? I go to Oscar parties and eat dinner with presidents and I’m boys with Meek Mill. How many jumbo jets do you own? You’re going down, brokeass bitch.”

And I can absolutely picture Belichick grabbing Doug Pederson on the field before the game and just pulling out every movie shit talk speech he’s ever heard.

I can just hear it. “Hey, Pederson: You’re the disease, and I’m the cure. I’m going to ram my fist into your stomach and rip out your goddamned spine! Yippee kay-yay, motherfucker!!!”

And after 18 seasons and five championships, finally they’ve been outed thanks to one Lane Johnson. God, no wonder everyone hates the Patriots. Classless bunch of assholes. And now they’ve been exposed for the phonies they are. Imagine how bad they’d come across if, say, Johnson was weirdly obsessed with them or something. Lucky for them, he’s not.