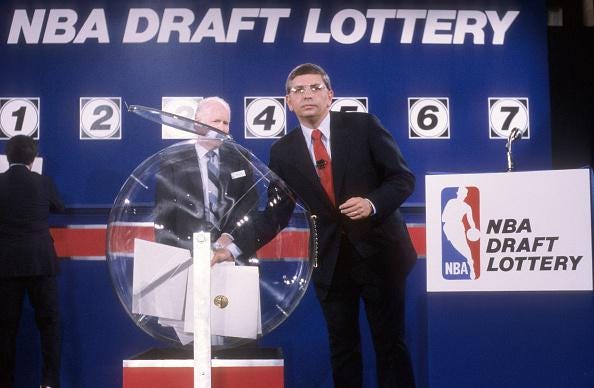 Ah, the NBA Draft Lottery. I mentioned earlier I'm a sucker for this day. It brings together 3 of my favorite things. College hoops, the NBA and the NBA Draft. Oh, it also brings together my 4th favorite thing - sports conspiracy theories. It's always a delight coming up with them and listening to the factual evidence as to why Michael Jordan was suspended two years for gambling and didn't really retire.

So with that in mind, let's get into the best moments of the NBA Draft Lottery. The lottery began in 1985, with the Knicks getting the No. 1 pick and landing Patrick Ewing. Yeah, we'll talk about that later. Three of the last four years the team with the worst record has won the lottery, but there's always more to this night than just that. There are memorable guests representing each team. There are memorable quotes. There are memorable conspiracy theories. Let's rank them and yell at each other about where one should have been ranked instead!

"This league has a habit, and I am just going to say habit, of producing some pretty incredible story lines. Last year it was Abe Pollin's widow and this year it was a 14-year-old boy (Nick Gilbert, son of the Cavs owner) and the only thing we have in common is we have both been bar mitzvahed. We were done. I told (Jazz GM Kevin O'Connor): 'We're toast.' This is not happening for us and I was right."

That was a quote by Kahn after he lost to Nick Gilbert and the Cavs in 2011 for Kyrie Irving. The Wolves had the No. 2 pick and took Derrick Williams, who, yeah, hasn't been worth the No. 2 pick. Pretty sure  you want Kyrie there. Oh, why is he so pissed? Just so happened that the Wolves had the worst record in the NBA that year and the best odds to land the No. 1 pick. Yeah, nothing to see here. Although, Kahn may have tried to draft Johnny Flynn again. Who knows. Either way what a quote from an NBA GM, nothing like attacking your league and a 14 year old kid.

9. Pat Croce gets the No. 1 pick for Allen Iverson and wants to high five you

The Sixers had the second worst record in the 1996 season. Luckily for them, the 1996 draft was loaded, but there was this guy named Allen Iverson that seemed to be the No. 1 pick. It's clearly who the Sixers wanted as we got to see just an impressive display of old white dudes high fiving each other. Between the NBA Draft Lottery and golf tournaments, it's a toss up for best awkward high-fives. This one is up there just because it's Pat Croce and absolutely lost his mind. The 96 Draft included Iverson, Camby, Abdur-Rahim, Marbury, Allen and Walker as the top-6 picks. Oh, it also included Kobe, Peja, Steve Nash, Ilgauskas and Jermaine O'Neal later in the first round. Pretty decent class if you ask me. Maybe tone it down a notch, Croce.

8. The Pelicans jump up to the top spot to get Zion the year they trade Anthony Davis, hmmm the Lakers too?

This might be the biggest crock of shit I've ever seen. The Lakers jump up to the 4th spot, making it easier for them to trade for Anthony Davis? Oh and the team that's trading Anthony Davis gets the No. 1 pick and the most hyped rookie since LeBron? Fuck outta here. Sure, I'm disgruntled that the Knicks ended up 3rd and missing out on Zion and Ja, but you can't tell me this isn't the shadiest development. This had David Stern nostalgia written all over it. 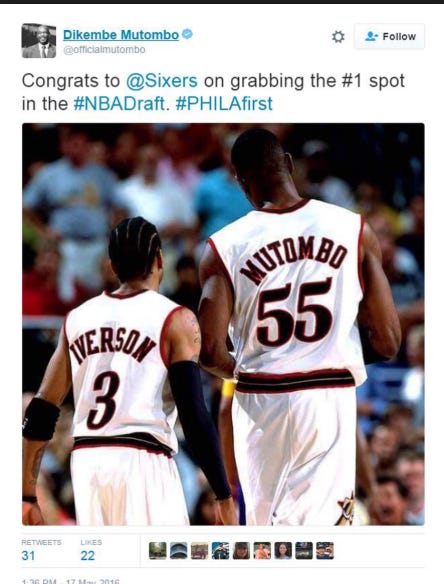 Oh, just a harmless tweet right? Oh, wait. That was tweeted at 1:36 pm. The lottery doesn't happen at 1:36 pm. He deleted the tweet, but not before everyone ran with it, especially when the Sixers did win the lottery later that night to draft Ben Simmons. Oh and his apology, where he says there's no conspiracy and just a mistake? Okay, Dikembe. I may not be able to score against you at the rim, but I can read what you're giving here. What mistake? You knew and you tweeted it out. That was the mistake. Oh, this next one was no mistake. 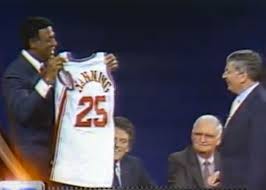 Now this one isn't really as much of a conspiracy as some others, but still makes you think. The year was 1988 and the Clippers had the worst record in the league. So it's not a surprise that Baylor thought they were getting the No. 1 pick to draft Danny Manning from Kansas. However, it's still a hilarious picture, especially when you see Stern laughing. I love me some David Stern and how he embraced his role. Elgin Baylor holding up a Danny Manning jersey right in his face makes it even better.

5. Irene Pollin and the Wizards get the No. 1 pick after her husband dies 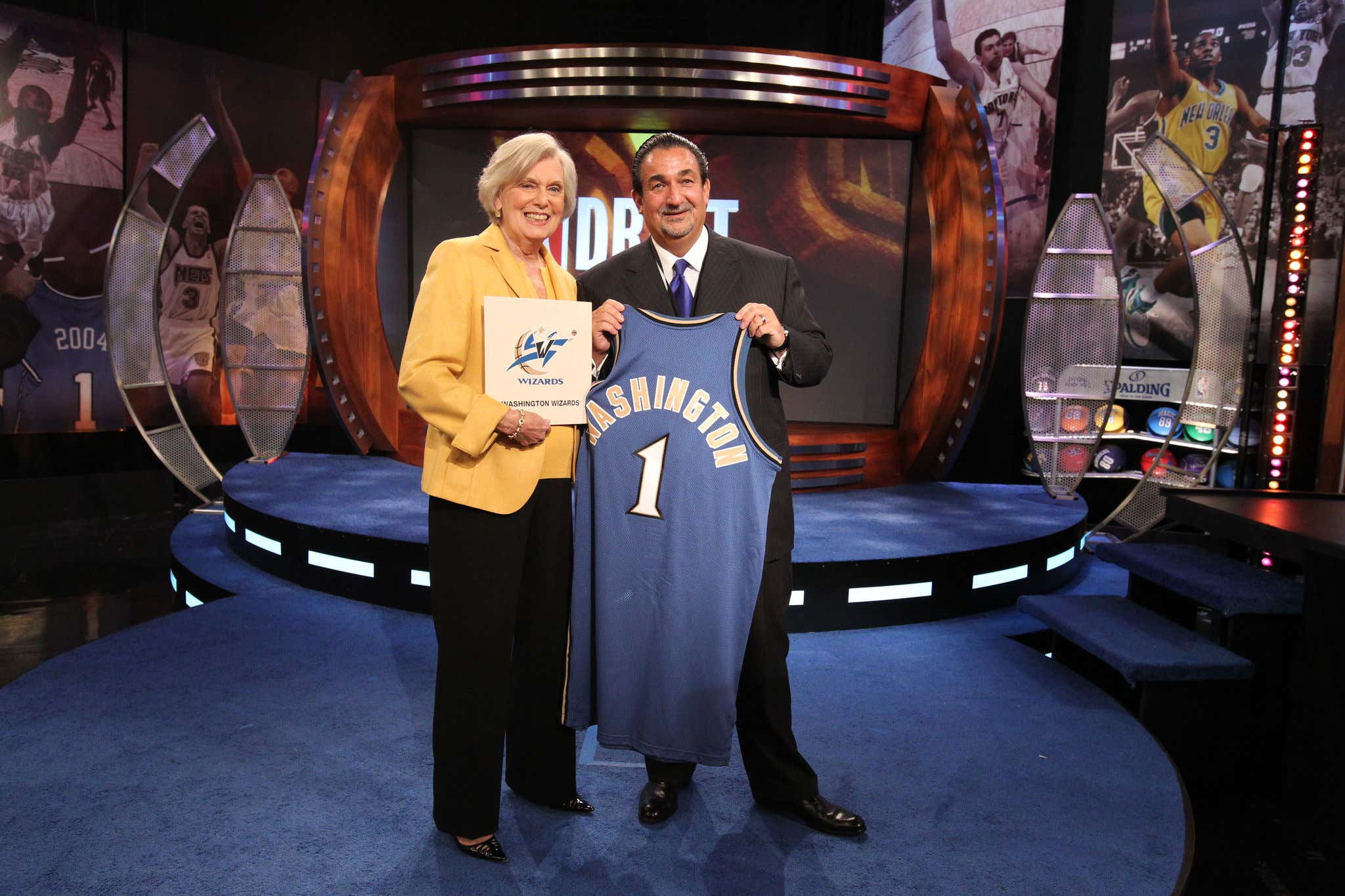 This picture is just so perfect. Everyone's reactions sums up the NBA Lottery so much. In this case, Irene Pollin was there to represent the Wizards. Just months before this her husband and owner of the team Abe Pollin died of a rare brain disease. Now, the conspiracy theorists will say because Abe was so beloved and John Wall was the clear No. 1 pick here, the NBA rigged it in order to help out the team that was suffering a bit. They had the 5th worst odds, so the jump was pretty drastic as you can tell by Irene's face here. Oh, it was also the season with Gilbert Arenas decided to bring guns to the locker room. I miss the old Wizards teams.

4. Derrick Rose gets to stay home as a long shot 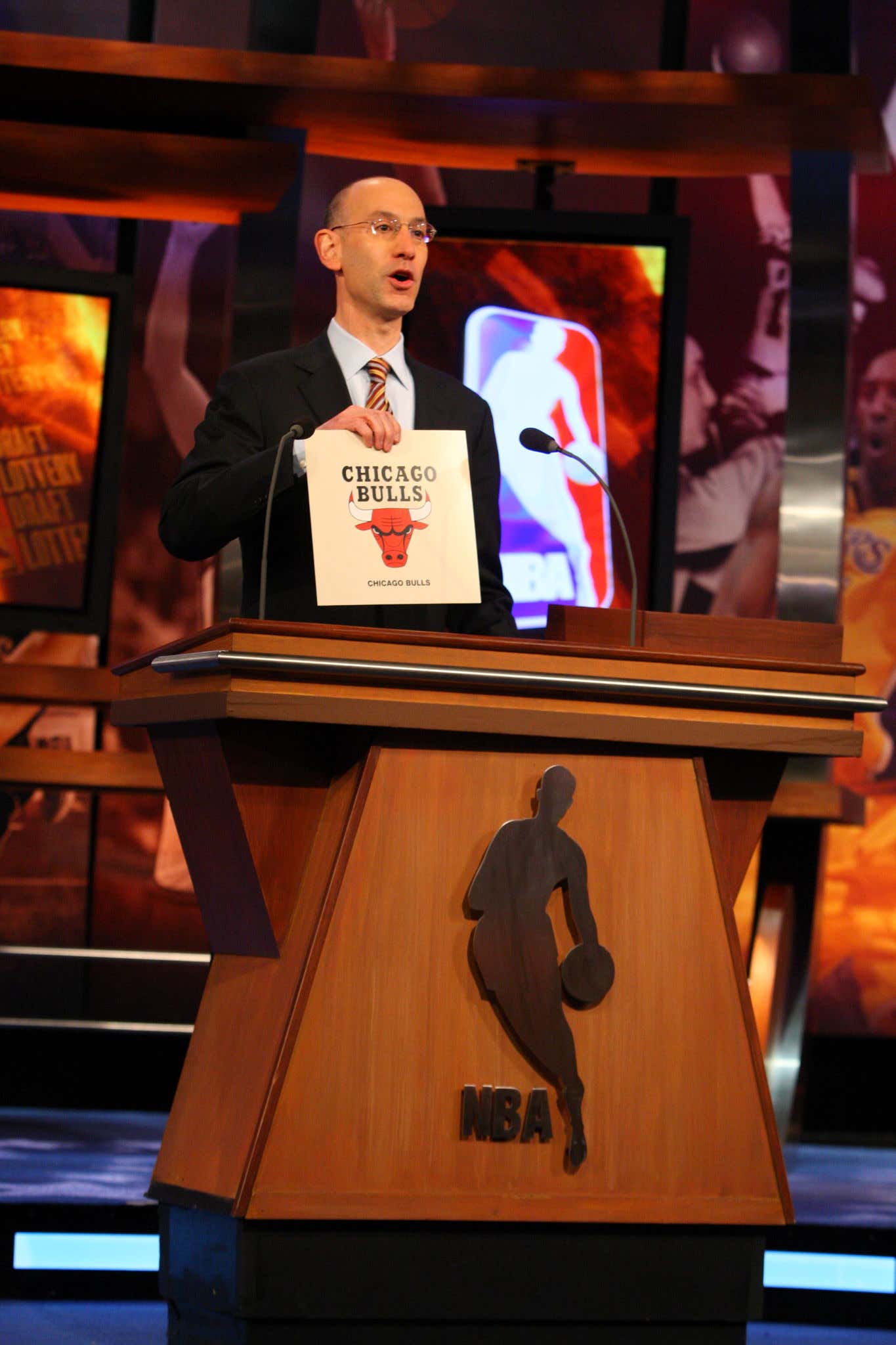 The Bulls desperately needed some help here. They were floating in no-mans land ever since Jordan left and a decade without having Chicago relevant meant it was somewhat bad for business. They had the Jay Williams situation. They had missed on some picks and here they were with just a 1.8% chance to have the top pick. Who was the top pick that year? Oh, just this guy Derrick Rose who happened to be from Chicago. Yeah, I'm sure that wouldn't help the team at all. Nope, nothing fishy here to help a once proud franchise try to get back to some glory days. Nothing to get the No. 1 pick back home for ratings. Nope.

3. Mallory Edens, daughter of the Bucks co-owner, sets the internet on fire

Give me just a second here: 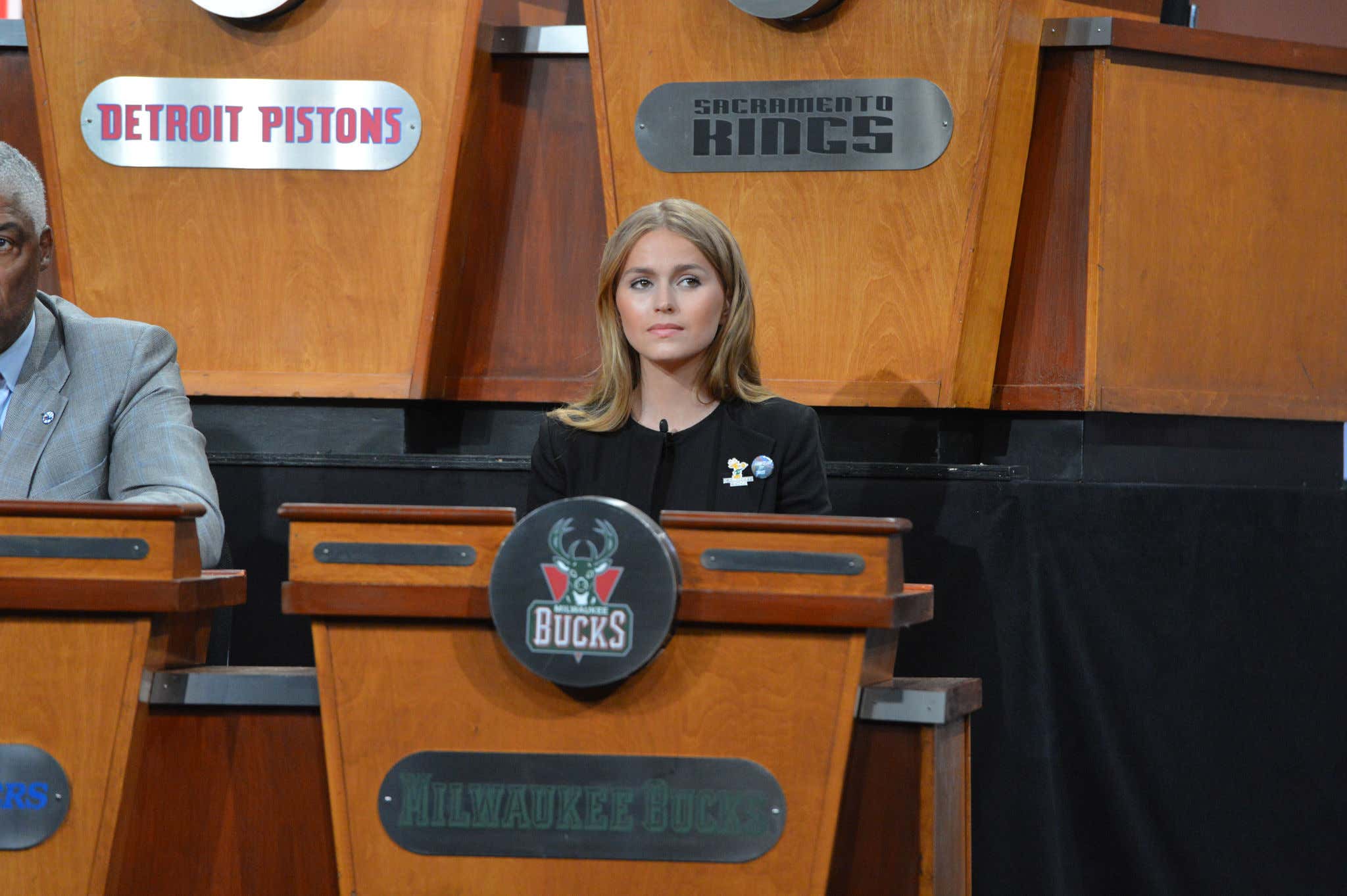 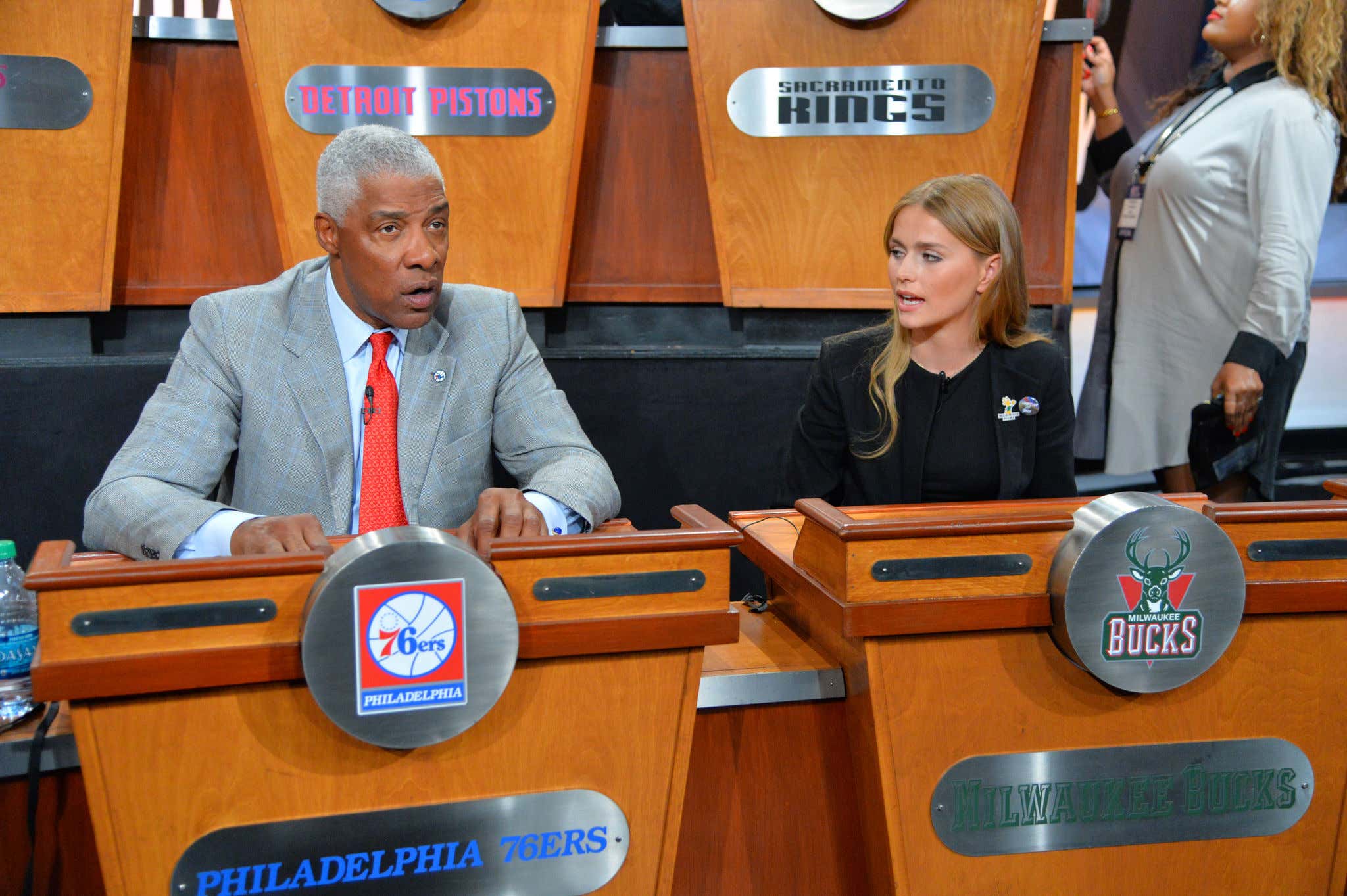 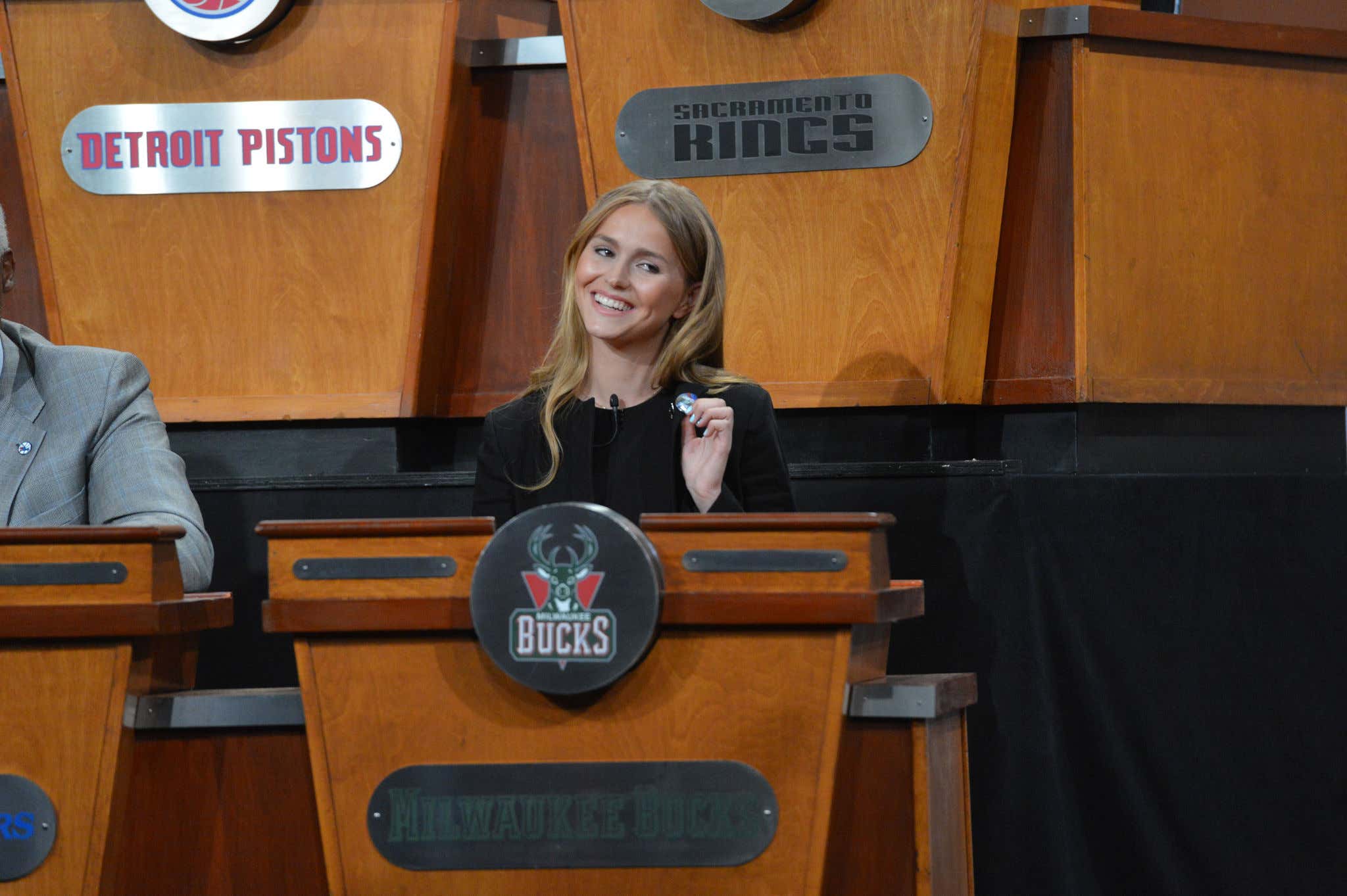 Before Giannis became Giannis this was the most the Bucks were talked about since the Ray Allen and Sam Cassell days. Mallory Edens is the ultimate smokeshow on NBA Draft Lottery night and will hold that title for some time. Oh, she also goes after people who come at the Bucks, like when she made fun of Bill Simmons.

Oh, yeah the Akron kid wasn't going to stay at home. SURE. Either way, this is hilarious just for Gordon Gund's comment followed by laughter. Shit, even Tirico knows that the NBA wanted LeBron in Cleveland for the narratives. They were tied for the worst record with the Nuggets and it's not like there were a bunch of big time markets that they could put LeBron in. The five worst odds that year were Cleveland, Denver, Detroit, Toronto and Miami.

One of the most talked about conspiracy theories in all of sports. The 1985 lottery, better known as the frozen envelope. Personally, I applaud the NBA for rigging the lottery the first time around. Let everyone know you mean business. In this case the legend is there was either a frozen envelope or an envelope with a bend in it for the Knicks so Stern knew which one to pull. The NBA desperately wanted the biggest market to have the best player coming out of college, so they rigged it. Personally, I don't think they rig it enough for the Knicks.