I’m such a sucker for the NBA Draft Lottery. Every year I tune in, expecting the Knicks to get lucky and every year I have my heart ripped out. Yes, I love Kristaps. Actually, I just like him after he unfollowed Clem – what sort of monster would do such a thing? But, the last time the Knicks had decent odds I was hoping they’d bring Karl-Anthony Towns back home. So with that sob story out of the way I’m here to talk about the Barstool cities and their teams. Pretty much everyone is represented in some fashion tonight except for the Wizards (DMV) and Nets (no one is really a Brooklyn Nets fan). We’ll look at odds for each team, likely landing spot and some targets. 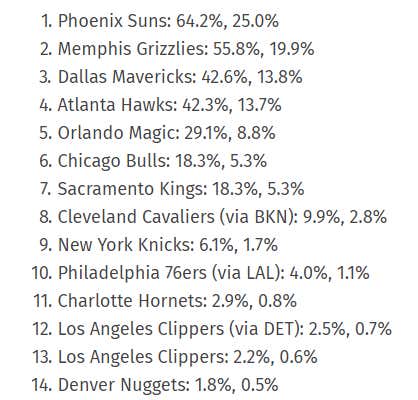 So with that in mind let’s get into the Barstool cities.

Some people may be wondering why the Celtics are being talked about despite not being listed here. That’s because they have the slight chance of being a top-2 pick and that’s the only way they can be in the lottery. That No. 10 slot that you see in odds that currently is going to the Sixers could be flipped to the Celtics if it lands at No. 2 or 3. If that’s the case then burn it all down because I’ll be screaming about conspiracy theories (more on that in a later blog today). I don’t trust what Brad Stevens is up to if the Celtics land at No. 2 and have the ability to draft a big that can help with rebounding.
Top targets for Celtics: 1. Deandre Ayton, 2. Marvin Bagley, 3. Jaren Jackson Jr.
All three bring something different to the Celtics. Ayton is the best player in the draft (in my opinion) and instantly brings a polished post game and you expect him to learn how to defend within Steven’s system. Bagley brings you that big time athlete that you can pair with a couple of other bigs, stretch the floor a bit and also has that polished inside game. Both guys are ones that will help with rebounding no matter what else they do on the court too. Finally there’s Jackson who can help run the 5-out offense, really shoots the ball well and if he can avoid foul trouble can protect the rim better than the other two.
Projected outcome: No lottery selection for the Celtics. Ainge/Stevens remove the lucky clover from their ass and the pick stays at No. 10.

The Bulls sit with an 18% chance to land in the top-3 and I don’t know why but I feel like it’s going to happen. This is the one team outside of the top-3 that is going to jump in. Perhaps it’s because I think they actually could be building a decent core there in Chicago. They have Big Cat’s favorite player Lauri, Kris Dunn made strides during his second year and Zach LaVine coming back from injury. Adding a top-6 guy could start to build a young core that could draw in a free agent or two in a couple of years and make the Bulls relevant again. The Bulls could go a bunch of different ways here, especially depending where they end up. Personally, I’d add another wing or post player before I added someone like Trae Young or even Collin Sexton. In fact I believe Sexton would be an awful fit alongside of Dunn. But pairing another big wing to play alongside Lauri or a post that has some range could do wonders to help free him a bit more.

Top targets for top-3 pick: 1. Deandre Ayton 2. Luka Doncic 3. Jaren Jackson Jr.
Top targets for No. 6 pick: 1. Mo Bamba 2. Mikal Bridges 3. Wendell Carter
The Bulls are in a position where I really think they can do no wrong unless they take Sexton here. That’s not a knock against Sexton as I really like him as a pro prospect, but as I said, they already have LaVine and Dunn. They don’t need another guard like that. If they get in the top-3 they have a few options. Obviously at No. 1 you can take Ayton and be set with him at the five, Lauri at the 4. You could add Doncic and pair him with Lauri on the wing, giving you a couple of big wings with him and Lauri. Even if the Bulls stay at six there’s going to be options. Someone is going to fall out of the top 5 whether it’s Mo Bamba or one of the guards. I’d take Bamba if he does fall and you add someone who can protect the rim right away. Bridges does the same thing as Doncic in the sense of being a bigger wing while having a ton of defensive versatility.

Ah, my beloved Knicks. They did just a bit too much this year to push them all the way to No. 9 when you really want to be in the top-6 or 7 of this draft. That said they still have some options as they are going through a complete rebuild. You have Kristaps nursing a torn ACL and an unknown date for his return. You actually found a piece of the rotation in Trey Burke. You have a young point guard in Frankie Smokes who is a fine rotational player that can really defend. Now, this isn’t saying they are going to compete, but they have the ability to build something with David Fizdale there as coach. Now, I do love the idea of moving Frankie to an off ball guy on the offensive side and pairing him with a scoring guard if that’s an option. You can let Frank defend the best opposing guard as well. I also like the idea of adding a bigger wing with the hope that one day Kristaps will just play the five and keep the floor nice and open.

Top targets for top-3 pick: 1. Deandre Ayton 2. Luka Doncic 3. Marvin Bagley
Top targets for No. 9 pick: 1. Mikal Bridges 2. Collin Sexton 3. Wendell Carter
Pretty obvious here. You want to go wing or scoring guard if possible. If not add a big that brings something different than Kristaps. That’s where I like both Bagley and Carter as two guys that can really rebound the ball. Carter can also protect the rim. The real dream here is to just take Mikal Bridges. Imagine the length on the defensive side of the ball with just him and Frank. He can learn a bit from Courtney Lee and maybe you’re able to trade Lee this year for an asset or a younger player. Bridges is also a great knockdown shooter that can play on the wing and let Frank drive and kick or Burke drive and kick.

Projected outcome: Knicks stay at No. 9 and take Mikal Bridges

The Process is back yet again. I talked about their pick earlier in the blog where they can lose it to the Celtics but they have great odds to keep the pick at No. 10. Even Brett Brown admitted it’s pretty clear what the Sixers need. Look, I still think Fultz will be okay, mostly because I’m not a Boston or Philly fan. He adds someone who can create for himself. But, with Simmons not being able to shoot and Embiid being a bit of a ball stopper, they really need to add a wing that can add shooting and some defense. Jayson Tatum torched the Sixers in the semifinals and they need someone who can defend him not named JJ Redick or Marco Bellinelli.

Top targets for No. 1 pick: 1. Luka Doncic 2. Deandre Ayton 3. Jaren Jackson
Top targets for No. 10 pick: 1. Mikal Bridges 2. Miles Bridges 3. Kevin Knox
It’s all about the wings here, baby. I don’t think they end up at No. 1 meaning they are going to select a wing at No. 10. The question is who is available here. The other key thing here is who really can create for themselves? Mikal is more of a catch and shoot guy. Miles isn’t really someone who is going to create for himself at the next level but rather finish in a quick move. Knox was at his best running off of screens and cuts. They could go for someone like Shai Gilgeous-Alexander, who can defend on the wing, but I still think it has to be one of the wings here. They all add some shooting and decent size to play on the wing. All are pretty interchangeable in terms of who they are defending.

Projected outcome: Pick stays at No. 10 and they take Miles Bridges