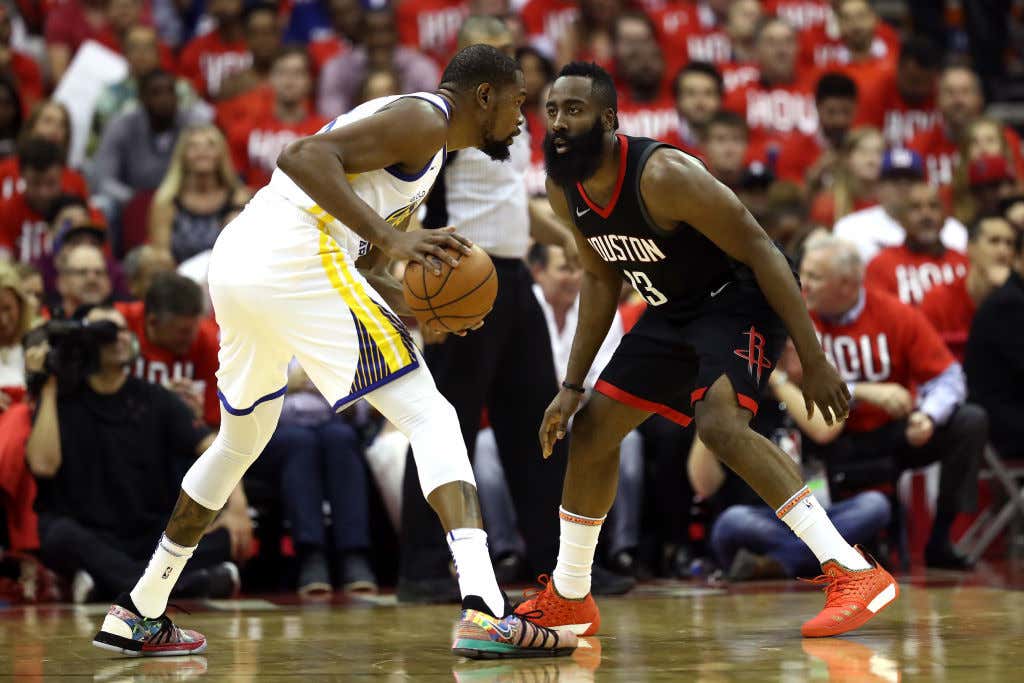 Well I think we can all agree that was a fairly entertaining basketball game. It took 60 seconds before we had our first dust up with Draymond Green and Harden, and from that moment on this was a Game 1 that definitely lived up to the hype. Both teams going on runs early, the Rockets jumped out to the early lead but just like the Warriors do it was only a matter of moments before things were close again. Both teams shooting 50% or better, both making 5 3PM, this series was as good as advertised. Then in the second quarter it was the Warriors turn to try and get a little separation, only to see James Harden close the half on a 7-0 run and things were tied at the half.

We should have known though, the Warriors have done this all year. They let you hang around for a half so that you feel confident, then they come out in the third quarter and flex on you. Next thing you know you’re down double digits which may as well be 100. They just keep coming at you. When you have guys like Durant, who could not be guarded whatsoever to the tune of 37 points on 14-27 shooting, Klay Thompson that for some reason was left unguarded repeatedly, things like this tend to happen. It’s never a good sign for the opposition when Curry has a pretty quiet night, Draymond Green has 5 points, and the Warriors still win comfortably. I mean it doesn’t take a rocket scientist to realize that if GS is going to shoot 53% from the floor and turn it over just 9 times, you are never going to beat them. Add in the second unit going a combined 8-12, the Rockets simply didn’t have enough.

Even with a push late in the third quarter, you can’t have a fourth like the Rockets did. Chris Paul missing shots, Luc Mbah a Moute missing threes, Eric Gordon missing layups, not the way I’m sure Mike D’Antoni drew it up. The loss sucks for HOU not only because they just gave away home court, the one thing they spent all year fighting for, but that they wasted what was otherwise an unbelievable Harden offensive performance. You can’t ask much more from the future MVP, his 41 points on 14-20 shooting was certainly impressive, and I only counted a handful of times that he forced things. It goes without saying that if the Rockets are going to make this a competitive series, they first have to pay attention on defense, wayyyyy too many cuts from the Warriors were just too easy. Second they are going to have to get more from their bench. At the minimum they need to outplay the Warriors second unit, and that was not the case in this game.

At the end of the day The Death Lineup did it’s job and now the Rockets are in a big time hole. This may only seem like one game, but Game 2 now becomes a must win. If they don’t get it, after all this hype we may be looking at a sweep. Let’s hope that’s not the case.