Where has this Orioles team been? This for sure was not the team we saw sleepwalk through April. The Birds can not stop hitting homers now, and I approve of their new style of play. They’ve won 5 of 6 against the Royals and Rays, but still find themselves 13-28, 15.5 games back. But they finally won back-to-back series, baby steps! I think we knew the team wasn’t as bad as they played the entire month of April, but it dug themselves quite a hole. The Orioles still post a run differential of -56 on the season,  they no longer have the worst run differential in the AL! They are now 10-12 at home on the season, but still have the disgusting road record of 3-16. They are posting a 5-8 record in May, but this last week is encouraging to see.

Coming off their 0-6 West Coast road trip the Orioles were embarrassed in their fist home game of the series, a 15-7 loss to the Royals in which Dylan Bundy did not record a single out in his start, gave up 4 home runs, and let in 7 runs. Everyone thought that would take the wind out of their sales, but they have rebounded nicely. In this homestead they have scored 58 runs in their 7 games at home, an average of 8.28 runs per game. Compare that to the 6 game road trip where they scored just 17 runs total. Their run total was of course padded by their 17-1 drubbing of the Rays on Sunday.

The home run ball is back for the Birds too. They have hit 19 home runs in their last 7 games, the Dongs are back! Everyone is joining in on the parade too, in the last week Manny Machado (hottest hitter on the planet) has 4 homers, Trey Mancini has 3, Chris Davis, Joey Rickard, Jonathan Schoop and Danny Valencia have 2, Adam Jones, Chance Sisco, Caleb Joseph and Mark Trumbo also have 1 each. They are spreading the wealth when it comes to the bombs now. It’s simple, they hit homers and they win games, early on they were not hitting home runs (34 homers in their first 34 games) at this pace and look how they played. This team is built like a beer league softball team, they want to slug you to death. 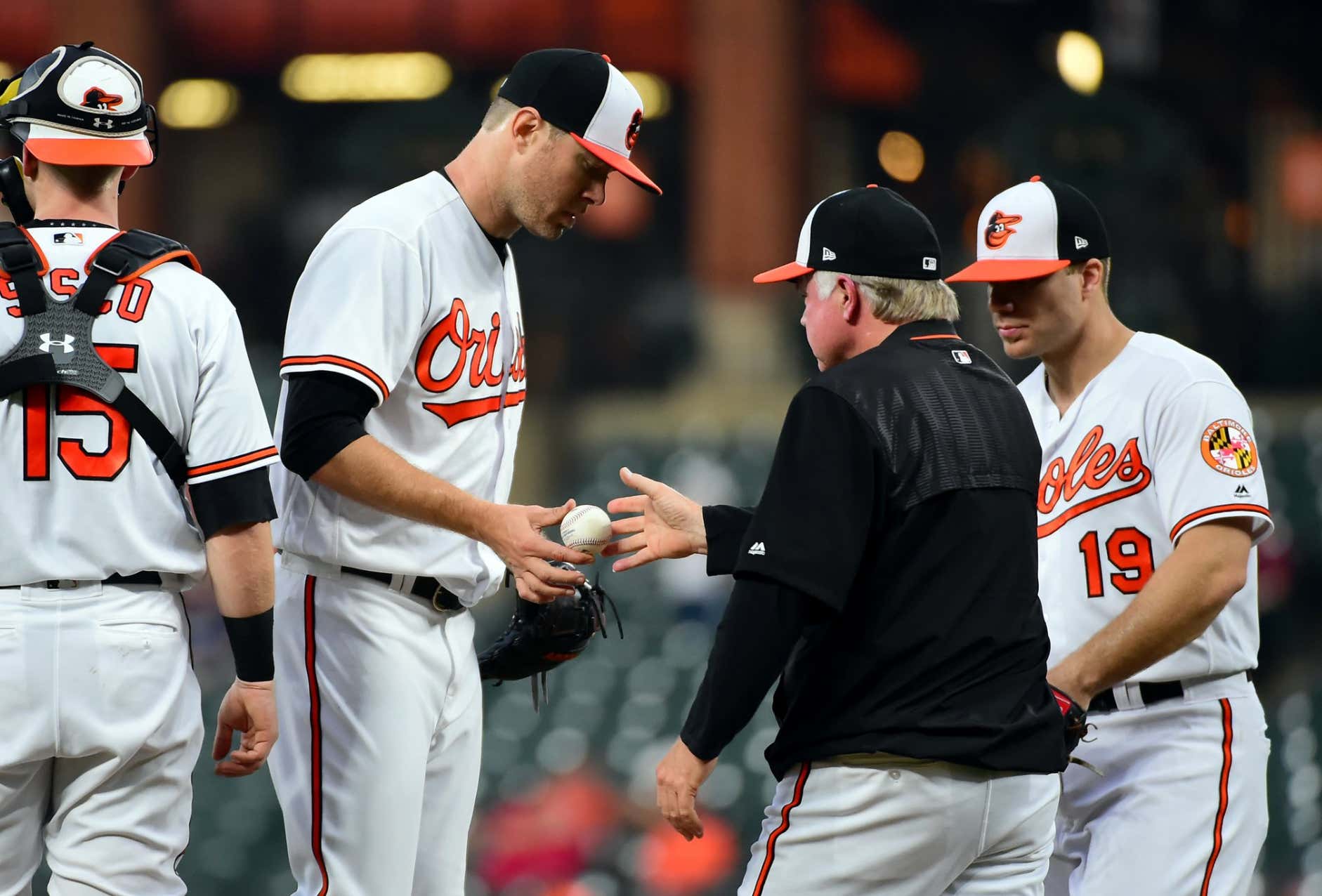 The pitching during this recent run has been pretty good too, except for the normal suspects. Chris Tillman was placed on the DL due to a back issue, but lets be real, they are just buying time until they can DFA him. They can’t possibly send him out there again.

On April 27th he had his best start in 2 years, 7 shutout innings and gave up 1 hit to the Tigers. Since then, and before that start he has been typical Chris Tillman garbage. His 2 starts after that he has gone 2.1 innings, given up 11 hits, 12 runs, 4 walks, and 0 Ks. He just doesn’t have it, and he hasn’t had it for 2 years. I thought it was a low risk high reward signing when they brought him back in the offseason, and now it just looks like a garbage signing. I fully expect the Orioles to DFA him when he is off the DL. His pitches are flat, his fastball has no life, and he’s not coming close to hitting 90. On the season he is 1-5 with an ERA of 10.46, a WHIP of 2.21, and 13 Ks in 26.2 innings.Thanks for the 2012 to August 2016, Chris. At least you’ll always have that.

David Hess made his MLB debut in Game 1 of the doubleheader on Saturday and looks like he could be the guy to fill Tillman’s spot. Hess got in trouble in the 1st inning, giving up a 3-run-homer, but that is all he would surrender. He would go on to pitch 6 innings, strike out 3, scatter 6 hits, and walk none. I liked what I saw from him, he wasn’t afraid to attack hitters, was hitting between 92-94 with his fastball, and rebounded after what looked to be a rough start.

Kevin Gausman has been fantastic this year, I talked about him last week, and he has continued to show he’s maturing and growing into the pitcher we thought he could be. He followed up the best start of his career with another gem, 7.1 innings, he did give up 11 hits but worked around them to only give up 2 runs, walked none and struck out 6. In his 8 starts he has an ERA of 3.18 and a WHIP of 1.20. He’s not walking batters either anymore, only 12 in 51 innings so far this season. Love to see Gausman step up like this.

Dylan Bundy has been horrible as of late. From April 28th to May 8th he made 3 starts, the totals were 9 innings, 19 earned runs, 9 home runs, 4 walks, and 8 Ks. His ERA rose from 2.97 to 5.31 in those 3 starts, his velocity was way down, and he just didn’t look like himself. That is what prompted the rumors of an injury, it was tossed out there that they thought he had an injured groin  during the road trip, and his record setting performance didn’t do anything to quiet down those talks, but he insisted he was healthy. Well on Sunday he returned to typical Bundy status. In the Orioles 17-1 win he went 7 innings, gave up 2 hits, he did walk 4, but struck out 7. Nice to see him bounce back after a terrible few weeks, that gives me confidence that it was just a bad stretch, and he’ll be okay.

Alex Cobb continues to get better, we saw him puke on himself early in the season, but it seems as if he is getting more comfortable and finding his rhythm. He started game 2 of the doubleheader on Saturday and went 5.2 innings, gave up 3 runs, struck out 5, and walking none. The 2 starts before that he has gone a combined 12 innings, giving up 3 runs, striking out 7, and walking 3. So again, his numbers look better as of late, and he is pitching like the Alex Cobb he we thought he would be.

Some other quick notes before we get out of here.

– Zach Britton is scheduled to be able to come off the DL on May 28th, and it sounds like that will be the case. With Britton returning, they’ll ease him back into the closers role, but more importantly, everyone else will shift back to their normal roles. This will benefit the guys like Richard Bleier, Brad Brach, and Mychal Givens. With Jonathan Schoop and Mark Trumbo returning, and soon Britton, the Orioles are finally getting healthy and will be close to their original roster on the field. Too bad they pissed the bed in April and dug themselves quite a hole to get out of.

Phils come into town for 2 starting tonight, and then it’s another road trip where the Orioles will get Boston for 4, White Sox for 4, and Tampa for 3.