Since Wednesday we’ve gone over 200 miles from Auburn, Alabama, and yesterday, Day 3, we crossed into Florida. Besides the welcome sign, other clues were the hazy humidity, the Hardees where our guys saw a strange gent washing his dentures in the bathroom, and swans with black eyes & broken legs.

As noted in my previous blog, the morning had started out rough with all of my team (team 1 out of 3) over-sleeping past our kick-off time, crammed in a van that wreaked of body odor. To make matters worse, I was exhausted & looking like Charlize Theron from the movie Monster. 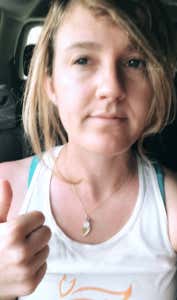 I decided to skip our morning jaunt to finish a blog, (the only I’d miss of the trip) but met back up with them on a roadside near Jackson Lake. After getting the knots in my legs rolled out & setting my feet ablaze with the burn of alcohol on blisters, I was ready for the next 7.5 miles in the Sunshine State. And boy, (earmuffs, lovely Floridians!), what a shithole.

I don’t think we passed a single mom n’ pop restaurant. It was like walking inside a dusty canyon with rapids cutting through it, except with long rows of fast food chains & their towering signs, and rivers of old Buick LaCrosses mixed with open-top Jeeps. 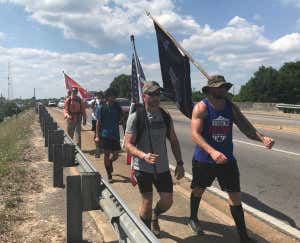 There were no trees on the side of the highway as temperatures went into the 90s, and my hands started to swell up like enormous, red balloons, but then we hit a small town and things got better. A man came running out of a gas station with a bag full of cold gatorades for us, people were honking and waving, and we were having a fun convo about vacation mishaps.

During our next break, we (everyone except for me) decided it’d be awesome to circle back to the Crestview Hooters. It was only the afternoon & we had our longest break yet, so we decided to go wild. After a couple beers each and some painful-to-watch attempts by one of our guys, attempting to hit on our waitress, we were all falling asleep at the table. 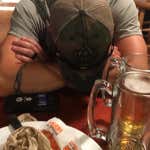 Our next hunker-down spot was the best yet; the Air Force Armament Museum. We had free reign of the dozens of bombers, fighter jets & helicopters on display. In the lot our small ‘convoy’ had music playing, hikers ordered pizza, and there was beer and a bit ‘o whisky flowing. 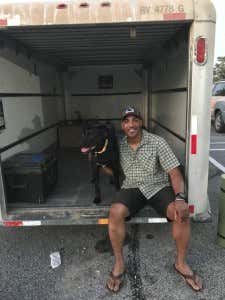 Unable to join in on the ruck due to knee surgery, Gordon, a Marine officer and instructor of War Fighting at the Basic School, volunteered to come down from the D.C. area anyway. For months he’d been helping SSgt. Campbell plan the event, and now he’s taken his own personal leave days to provide logistics support, drive the supply truck, replenish water & ice, and manage all social media for the event. He estimates we’ve gone through about 235 gallons of water in the jugs so far & roughly twenty 24 packs of water.

With the 3 ruck teams rotating on a constant basis, he estimated he’d only gotten about 4 hours of solid sleep over the last few days. He probably wouldn’t want me saying this, but he also spent his own money to get enough snacks, drinks & supplies for all 40+ participants:

After talking with Dan (SSgt. Campbell) for close to 3 months & realizing he was on a slim budget, I knew it’d be tough with the magnitude of participants. Logistics is my job, so it comes naturally to me to solve problems. Easy for me to do these kind of things.

He’d participated in a previous event for the Raider 7 at Camp Pendleton in 2016 that mirrored one taking place at the same time from Navarre, FL (where the memorial is) to Camp Lejuene, NC. Knowing he wasn’t MARSOC (Marine Special Operations Command), I asked why he was willing to do so much to remember these fallen men:

I worked with MARSOC as advisor in 2013 in Helmand Province Afghanistan training ANA (Afghan National Army) commandos & the 215th Corps. I was drawn to their small teams, problem solving skills down to the lowest level, and overall physical & mental toughness. In 2015 I went to an assent selection, but wasn’t chosen. I’m not bitter about it and still have friends in the organization. I believe it’s important and will do anything I can to show them support.

Hardoooo! As a fun side note, it’s also worth mentioning that this upstanding Marine &  selfless person pooped in a plastic bag yesterday, and when he turned away for a second, Gunny, the dog sitting next to him in the photo above, ate it. Later in the day Gunny was licking a lot of faces, including mine. Unlucky.

Excited to get a couple hours of sleep before heading into Day 4 (today) with another 7.5 mile hike at 2AM, I was excited to sleep outside of the van in a bug-proof pop up tent. Looking up at the stars in the shadow of a military plane, I was excited for the day ahead. I dozed off with a shit-eating grin on my face, probably literally.

For anyone in the #Navarre FL area, meet up with us today at 10AM @ 8543 Navarre Pkwy. We’ll be there for a few hours and FYI – there will be free food.