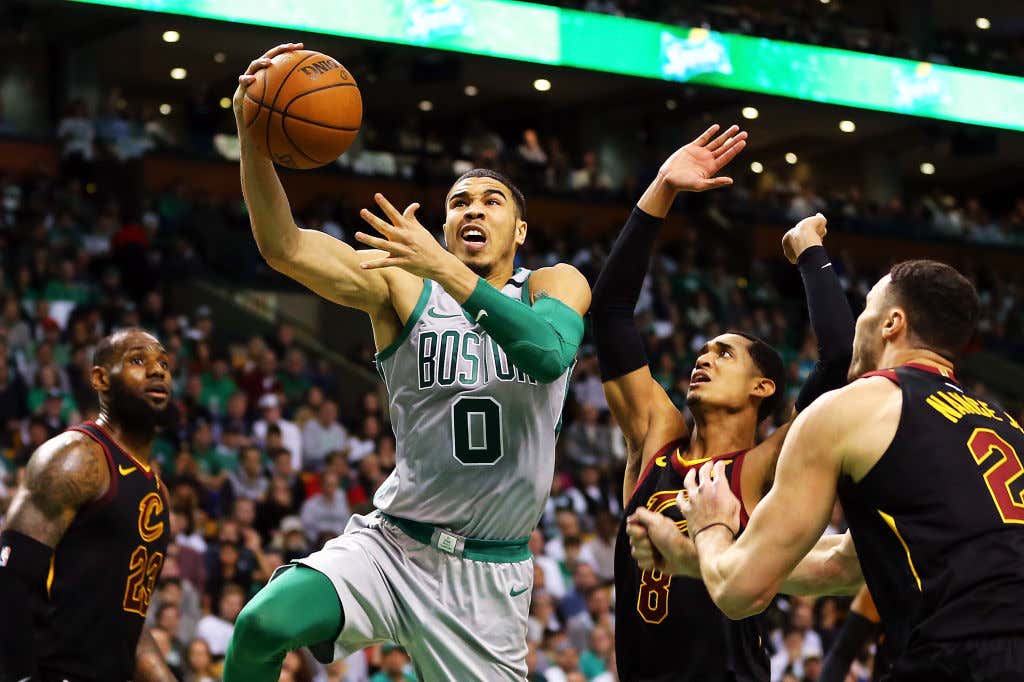 The brutal honest truth is that for the last 8 years, any sort of matchup between the Boston Celtics and the Cleveland Cavaliers has not gone well for a certain franchise, and it’s not the one with Lebron James. If you manager to hear a lot of the national narrative about this series, you’ll hear a common theme. The Celtics have no shot. It’s funny, I’ve been hearing a lot of that from the basketball world, that the Celtics would lose to MIL, and then PHI, and now CLE. To form the conclusion that not only will the Celtics lose, but that they have no shot after everything we’ve seen over the last few weeks is a bit confusing to me. It will be by far the biggest challenge for the Celtics to finally get past their Boogie Man and return to the NBA Finals (what a wild fucking sentence to type), but it’s not entirely impossible. In order to understand how they can  do it, we first have to understand who these two teams actually are.

The one thing I want Celtics fans to understand before getting into this series, is that the Cavs are not the Sixers. What I mean by that is one of the biggest advantages the Celtics had in that series will not fully translate over to this series. There is no JJ Redic and Marco Belinelli on the other side. While Brad will find and exploit certain mismatches, the only real mismatch is whenever Korver is on the floor. Instead of being guarded by scrubs, I would imagine Lebron spends time on Jayson Tatum, forcing the Celtics to find someone else to beat them offensively. Here’s why that’s important.

If you settle and go isolation against this Cavs team, you’re in trouble. Opponents are shooting just 39.1% and are scoring 0.78 points per iso possession so far this playoffs. The Cavs are simply the best team left at defending isolation. So the idea that the Celts will be able to just give Tatum the ball and let him cook like he did against PHI might not be the best strategy. Same goes for Rozier. While you still may be more athletic than CLE, you will not have the same sort of advantage this series as you did in the last one. That gap has closed. Say what you want about him as a defender, but JR Smith is better than any guard defensively that PHI put out there. Same goes for guys like Clarkson and Hill. That means in order for the Celtics to have success in this series, they need to get back to moving the ball to get the defense rotating and THAT’S when they should attack. You see the Cavs give up the third most points in the paint this playoffs, but it’s all about how you get into the paint that will matter. If everyone can stay home and guys like Love and Thompson  just wait for you at the rim, you’ll struggle. But if the ball is moving and guys are having to close out hard forcing rotations, that’s the easiest way to take advantage of this CLE weakness.

One way I think the Celtics do this is run a bunch of actions involving Tatum/Horford. You want to combine the two things CLE struggle with, defending the P&R and get them moving side to side. That’s why I think Brad will run a bunch of plays where the ball starts on the weak side, Horford sets a screen for Tatum to give him space, and we live with the results

We all joke about how good of a screen Horford sets, well that’s going to be extremely important in this series, especially if LeBron matches up on Tatum. Speaking of Horford, for the Celtics to win this series, or hell for them to just not get blown out, he has to win his matchup with Tristan Thompson. You may think it’s more about Love/Horford, but I disagree. Tristan Thompson is the biggest issue for this Celtics team because he has figured out a way to mentally get in the head of Al. This season when both Horford and Thompson are on the court, Al’s FG% drops from 61% to 33%. His Ortg falls 17 points, and he is an overall -8.4 net rating. When Thompson is off the floor, that’s when Horford becomes a real problem for CLE. That’s why I would expect them to not only start Tristan, but for him to play a major role. If you remember every series loss to this team, it was Tristan Thompson that sort of beat the will of the Celtics. That can’t happen again.

The one way the Celtics can neutralize Lebron is to get this team in transition. Only GS is better in transition of the teams left, and this is an area where you can use your youthful legs to your advantage. The Cavs are average at best in terms of transition defense, they rank in the 33rd percentile this playoffs and give up 1.15 points per transition possession, which is the highest of any of the remaining four teams. Unlike PHI, they aren’t going to shoot themselves in the foot by turning it over, as they have a very good 9.9% TOV rate. Instead the Celtics are going to have to clean the glass and push the ball, because if you let the Cavs get back and set up their defense, things obviously get a little more difficult.

In looking defensively, how the hell can the Celtics stop this Cavs team? Well, unlike last year the Celtics roster does match up a whole lot better on paper. They are longer, they have a big goon in Baynes who can do all the rim protection and rebounding that Amir Johnson couldn’t, and they can use their current playoff experience to their advantage. You see just like how playing Giannis prepared them for Simmons, having played the Sixers was great preparation for something the Cavs do really well and is a huge part of their offense. Run their shooters off screens, most notably Korver and Smith

This playoffs the Cavs lead all teams with 1.59 points per possession off screens, and shoot a RIDICULOUS 58.8%. They score on 60.7% of all plays that come off screens, so the Celtics will have to be ready. The Good news is the Sixers were the second best team doing this exact same thing, and they ran it with twice the frequency (9.8% vs 5.0%). This means the Celtics should have some idea as to how to switch and defend these guys because we all know this is the key to winning this series. You aren’t going to stop Lebron, but you can stop everyone else. Making sure you are flawless on your communication and switching is how they’ll do it.

The other elephant in the room is the Cavs have the ultimate trump card in Lebron James. That’s not exactly news, and if you can take one thing I say to the bank, it’s that I already know how the Cavs are going to use Lebron. It’s simple, and we saw it time and time again last year.

This is it right here. This is what CLE is going to run about a billion times in this series. No person on the planet has proven they can stop a full head of steam Lebron, and this little high screen switch is going to be a staple of the Cavs offense. You know the same way the Celts picked on mismatches? The Cavs are going to do the same thing, getting either Baynes or Horford in space, and just keep attacking until Brad either has to take them out or they get in foul trouble. It’s all about exploiting the slower defenders of the Celts, having everyone else go to the corners, and let Lebron just be Lebron. They know that if you take Horford out of the game, things get VERY difficult for the Celtics, so his ability to defend this play without fouling is incredibly important. This situation is really where I wish they had someone like Theis available, that way you can still play a big but not lose any lateral quickness. Celtics fans feel confident because of all the wing players available to throw at Lebron. What many don’t realize is all it takes is one quick screen and that becomes irrelevant. Any sort of foul trouble to the Celtics bigs as a result of this play exposes the Celtics on the glass against guys like Thompson and Love, and if they feast on the offensive glass as a result and Lebron gets more FGA, that’s where bad things happen.

It will also be imperative that Kevin Love is not allowed to average 22.6/12.4/2.6 on 48/53% splits with 4.6 3PM a night like he did last ECF. I mean those numbers are fucking ridiculous. He didn’t average half of those 3PM in any other series in last year’s playoffs, and so far this season hasn’t averaged more than 2.0 a night. But now that he’s looking healthy and better than ever, if they end up starting Love and Thompson the Celtics will have to go big, and that’s where on the defensive end we’re going to need Horford to be that lockdown defender we just saw him be in the previous two series. One thing that TOR tried that did not work was put a smaller guy on Love.

Maybe the Celtics do something weird like try Semi or something, but Love has proven he can expose that opportunity. That’s why for me, it’s Horford or Baynes. Even if you have to use the slower Baynes and that forces Love to put it on the floor, I’d rather that then him making threes anyway.

It’s going to take nearly perfect basketball for the Celtics to pull this out, and the big question is what type of defensive team will CLE be. Will they look more like the team that swept TOR or the team that couldn’t stop a nosebleed all year? Can a team that relies heavily on the three point shot come through against the best perimeter defense in the NBA? Can the Celtics actually not get down by 50 at any point in this series? These are all things I can’t wait to find out, but unfortunately we have to wait another day. The rest of the East hasn’t been able to do it, as was the case in 2010 when it was up to the Celtics to end the Lebron Era in CLE, I guess it’s just time to do it again.