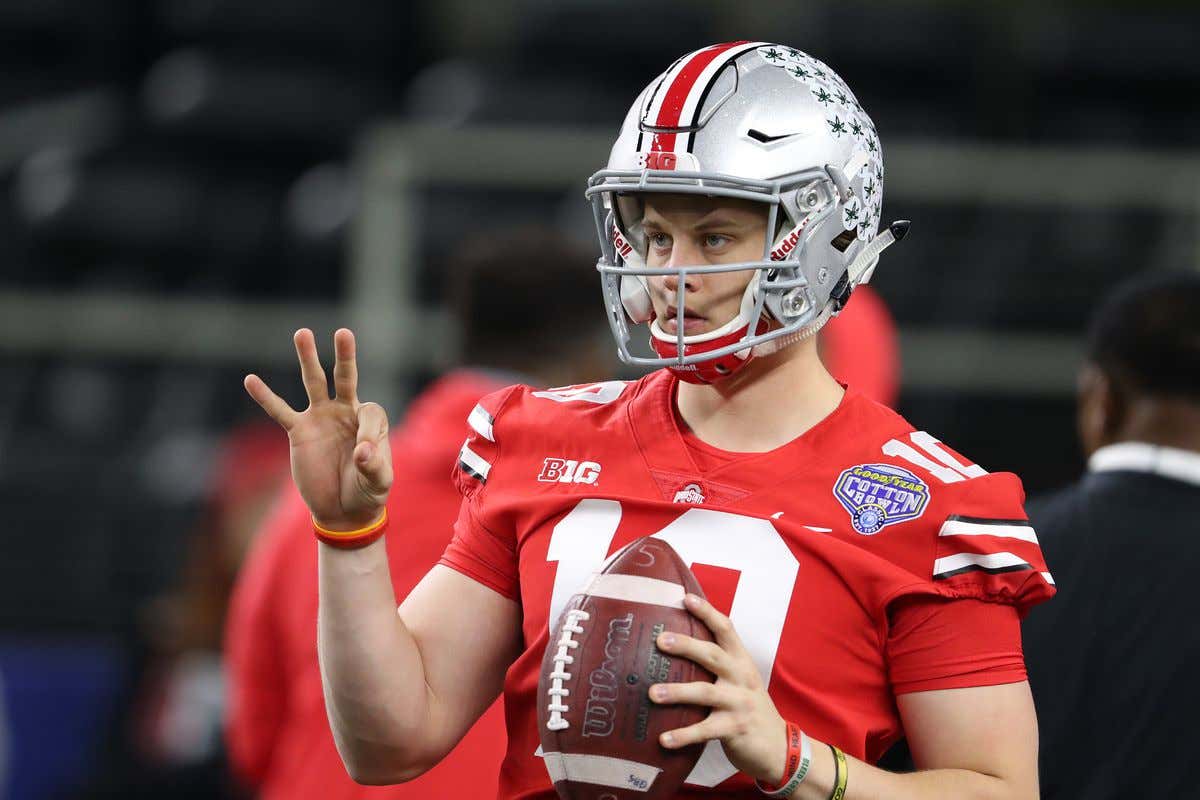 Inspired by a #BloggersBlogger and the best CBB guy around, Reags, I’ve decided to do a little weekly roundup of the news across the CFB world every Friday. Like any major sport, a bunch of noteworthy news happens each week in college football, but it’s not noteworthy enough to write a full blog on it. No need to fill up the home page with blogs about the CFB bowl schedule being released. That’s what this weekly post will be for, some would call it a blog of misfits. Just some random tidbits to end your week.

Dan Mullen told a story to Florida’s “Gator Club” this week about one of the few times that Tim Tebow swore. As expected, it was awesome:

Miami-Herald-“We’re on the bus, getting ready to get off the bus and the Gator Walk is out of control. The bus was rocking,” Mullen recalled Wednesday while speaking to the Gator Club of Miami at Marlins Park. “[Tim] Tebow gets up on the bus, drops an ‘F’ bomb in front of the team. He will deny it until he dies. But I’m telling you what, I think we won by 40-something that night. The game was over before it ever started.”

The game Mullen is recalling happened to be against LSU in 2008.

Yes, 2008 is the year Tim Tebow gave his infamous speech:

There is somewhat of an urban legend on how Jimbo Fisher got his nickname of “Jimbo.” If you go to his Wikipedia page you will see this story:

Fisher earned the nickname “Slim Jimbo” because of his affinity for meat snacks. He has mentioned in numerous interviews that he wishes to launch an organic jerky company after he retires from coaching. The company would feature jerky made from animals native to both the Deep South and his native West Virginia, such as alligator, muskrat, and wild boar.

Turns out that Jimbo doesn’t want to open a jerky company and the conspiracy that he ever had any aspirations to open one was started by his son:

Dallas News-when The News sat down with Fisher in his office this week for an extended interview, moments after pleasantries were exchanged and before the first question could be asked, a smiling Fisher blurted: “Let’s set the record straight. I don’t want to have my own jerky company.”

Uh, OK. Is this something we need to correct?

“Yeah, you do need to correct it,” Fisher said, his smile expanding to a laugh. “I mean, I like beef jerky, but I ain’t trying to open up no damn company. How about that?”

Any idea who or what is the source of the misinformation?

“Yeah,” Fisher said. “That’s my son being a goofball.”

That’s right. Despite a 34-27 win over Gus Malzahn’s Tigers in the Peach Bowl, Central Florida “would’ve been dusted,” McElroy said.

“If a national championship was on the line, Auburn would’ve played a whole heck of a lot better,” McElroy said. “Just go watch the effort. Talk to the coaches. They may not want to tell you that.

“Getting those guys ready to play just after they got their heart ripped out (in the SEC title game) is really difficult.”

I can’t say I 100% disagree, but the fact that we are all still talking about UCF shows how long the offseason truly is. Come back, football. We miss you.

This was expected, but Burrow is now the biggest free agent in college football. He will be immediately eligible to play as a graduate transfer. LSU, Cincinnati, Nebraska, and Florida all expect to be in the mix for him:

Blake Barnett Has Transferred Again And This Time It’s To USF:

Hopefully, he’ll find success against the likes of UConn and Tulsa. No guarantees, though!

We had two instances of former players calling out coaches for using them on recruiting graphics for schools they didn’t attend this week!

Crootin’ drama is the best drama in college football. Thank god we get to see it all unfold in front of our eyes on Twitter:

Speaking Of Crootin! NOT GOOD!!!

Yahoo-“She stated she made the decision to leave the residence in her vehicle and head to school but Justin took her cell phone. He then drove away from her residence and she followed behind him in her vehicle. She stated she observed Justin throw something outside of the window which appeared to be her phone. She stopped and collected what found out to be her screen protector. She stated she pulled into a gas station … [and] stated Justin pulled into the gas station as well. She asked for her cell phone back which he purposefully threw on the ground causing the screen to shatter. She stated she collected her phone and drove to school in her vehicle. I was advised Justin followed behind her in his vehicle even when she pulled into the student parking lot of [redacted]. She pulled into a parking space and Justin pulled in behind her in a white SUV. She stated Justin then started to kick her vehicle in several locations. Justin also attempted to let the air out of her passenger rear tire but she stopped him. She stated he appeared to be escalating his behavior so she left the parking lot to get away from him.”

High school relationships: still dumb. Can you believe that people get married to their high school sweetheart? Just bananas. Imagine if we all had to marry our prom date? The divorce rate would be around 99.8%.

Give This Round To Jim:

I’m sure Urban won’t lose any sleep. He has three of those national championship things that Jim doesn’t: 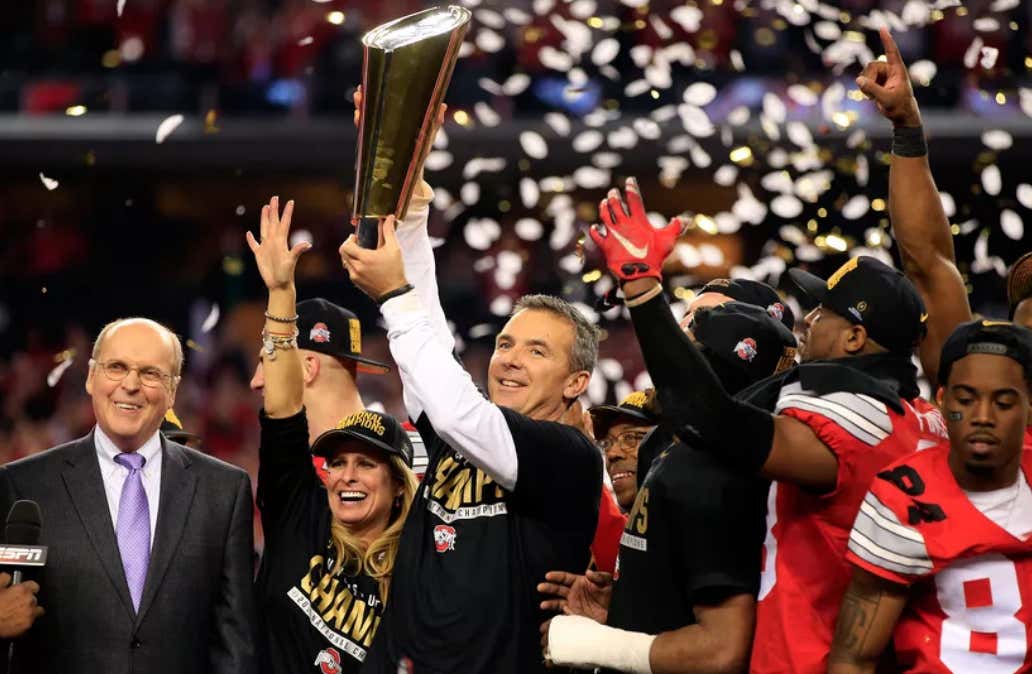 He also has 6 conference championships to which Harbaugh has….zero!

Bama Strength Coach Is Now Paid More Than The President:

Scott Cochran deserves it. You also should’ve already been following him on Twitter by now:

The NFL Got Booger AND Tess?! NOOOO!

Hopefully, Booger still does some CFB stuff for ESPN. Going to miss Joe Tessitore on the call. RIP to the #TessEffect:

I still don’t believe Incarnate Word is a real school, kind of like Finland doesn’t exist (look it up), but their new end zone reminds me of the greatest trick play in CFB history:

“So, you’re telling me there’s a chance?”

It’s easiest to throw haymakers at someone when they are down, but this story on McElwain’s lack of an adequate strength program from an anonymous player at Florida is NOT great:

Inside Gators-“It was a joke. I love Mike Kent to death, one of the best people I have ever met. Great guy, but it was a joke. We didn’t really lift anymore, we stretched. Under coach [Will] Muschampwe lifted heavy, Olympic style lifts. That’s football weight lifting. We didn’t lift for max or do heavy power lifting under [Jim McElwain]MAC and Kent. Our program wasn’t a serious off-season program. There was no accountability. If you missed a workout, there was no you had to make it up or get up and run the next morning. If you missed a workout, you just missed it. They couldn’t enforce anything, or they wouldn’t, so they started making some things optional. Once you make it optional, what do you think is going to happen? Guys are going to take the option of not showing up.”

If true, I don’t know how this happens. How does no one speak up? It’s the University of Florida. The SEC! If you don’t like it, go play intramurals!

Tyler is a three-star TE, who was not offered by his brother’s school, Georgia. They don’t deal with three stars in Athens.

CFB Talk-In a Week 2 win over Weber State this past season, Watson sustained a serious knee injury and didn’t play the rest of the year. Prior to the injury, Watson’s 83 yards in less than five quarters worth of work this season were leading the team.

In 2016, Watson was second on the Bears in rushing yards with 709 and led the team with four rushing touchdowns.  Eleven of those yards and six of his 143 carries that season came in the Golden Bears’ Week 3 win over… the Longhorns.

Watson finished the Cal portion of his playing career with 1,390 yards and eight touchdowns on 274 carries.

I am bolding the ones that have caught my eye and posting an initial lean. Throughout the summer I will preview each team in depth and in relation to their win total. Should be fun. Lots of cool content on the way!