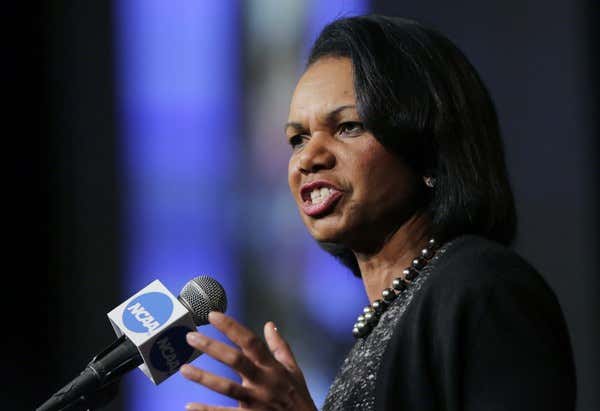 Back to Rice’s editorial. She completely changes her stance, or rather her statement, regarding players being able to make money off their name, likeness and image. During the original report, Rice said they wouldn’t comment further on compensating players due to pending litigation. What she really meant was they didn’t want to talk about that while being at NCAA headquarters, working as a commission funded by Mark Emmert and the NCAA and rather would prefer to wait to be on their own to talk about it. Because that’s exactly what happened. Rice did an interview with USA Today where she said the following:

We believe that students ought to be able to benefit from name, image and likeness but you can’t decide a program until you know the legal parameters,” Rice told USA TODAY Sports. “That was the point. I think some of the commentary suggested that we didn’t really speak on this issue. I think we did speak on this issue, it’s just that we understand there’s a legal framework that has to be developed first.”

She’s correct there. You should be able to benefit from name, image and likeness and you do need some legal parameters put in place before you can go real in depth with the program. But, uh, when was it ever talked about during the commission? I must have missed that part because the commission talked about ending the one and done for the majority of the time – you know, a rule that isn’t the NCAA’s. But, at least she finally comes out and discusses NLI and how players should be able to benefit from it. If only it stopped there though.

See, that was just an interview she did with USA Today. She also wrote this editorial, which has some nice thoughts and ideas. However, she leans on a crutch that is factually incorrect, which we’ll get to in a second. Here are the bullet points she lays out

• Ending one and done in men’s basketball and the charade that it is. An athlete who is ready to go directly to the NBA or to the developmental league should do so. No one should be forced to go to college.

• Allowing student-athletes to “test” the NBA draft and retain eligibility if they do not sign a professional contract.

• Permitting student-athletes to consult agents or other professionals in order to better assess their prospects.  This is happening under the table right now and should be brought above board.

• And as soon as the legal framework is clear, developing a new policy on name, image and likeness. NCAA policy is inconsistent on this matter. Olympians already enjoy an exemption and there are other case-by-case exceptions. It should be possible to develop a legally compliant approach that allows student athletes from all sports to benefit.

We have also recommended several steps to address the bad behavior that is undermining confidence in the sport by:

• Insisting on a system for compliance that would vest responsibility for investigation and adjudication in a new, independent body of professionals. The NCAA no longer has the credibility to carry out this function. Universities and their employees need to be compelled to cooperate by agreeing in advance to do so and they should be punished if they don’t.

• Strengthening penalties to include a five-year ban from postseason play and the tournament as well as a loss of associated revenue. We believe this will get people’s attention.

• Requiring youth basketball operators and apparel companies to be transparent about their finances. In time, the NCAA should develop its own tournaments with very strict standards of behavior.

Shockingly, I agree with about 50% of the bullet points. I like the ability to test the NBA draft and retain eligibility. I like letting athletes deal with agents as it happens in other sports legally. I like developing a NLI program. I really like bringing in outside people for investigating NCAA violations.

However, I hate that they are so focused on ending the fucking one and done. This is an NBA rule. Stop trying to pressure the NBA into changing that. That doesn’t fix college basketball. It doesn’t fix it a tall. I agree that no one should be forced to go to college and that I wish there wasn’t a one and done rule, but it’s a goddamn NBA rule! The absolute dumbest thing is requiring youth basketball operators and apparel companies to be transparent about finances and the NCAA developing its own tournaments. Uh, who is going to attend that? Top kids don’t want to attend that and it completely contradicts the whole no one have to go to college thing. Oh, can we also get the NCAA to be transparent about finances? I mean, if we’re going to look at corrupt organizations, why not start there too?

Ultimately, my biggest complaint though is Rice using this as a talking point:

It is a privilege. The student down the hall in the dorm is spending whatever resources his or her parents may have, taking out loans and working 20 hours a week to pay for a college degree. And it is a valuable asset with earning power $1 million greater over a lifetime than that of a non-college graduate. There will also be relationships and mentors who can help the student-athlete to start a career.

Given that only 1.2% of college basketball players go to the NBA; given that there are only 60 draft positions and that 40% will go to international players; given that an NBA career averages 4.5 years – real security comes, as it always has, from getting that education. It is time for all to acknowledge that fact.

Working 20 hours a week to pay for a college degree? How many people honestly worked 20 hours a week during college? I know I didn’t. Also where is this $1 million number coming from. It seems like a very arbitrary number that just sticks out because it’s a million. Now, the real problem is the second paragraph. The only factually correct part of that statement is there are 60 draft positions. 40% of international players? Excuse me. Since when? Last year had 10 international players get drafted, one of whom was Terrence Ferguson. That’s 16%. The year before that? 15 people were drafted or 25%. That’s not 40%. Stop using factually incorrect numbers to make up an argument. It completely defeats the purpose and shows why this commission is viewed as a joke.

So in response to that. I present to you, The Reags Commission. This was not funded by the NCAA or anyone really. This is just a man who loves the sport and has some ideas how to make it better. Don’t worry I’ll save my on the court suggestions for another blog. This is just off the court stuff. I also am aware some of this will be easier said than done, but let’s assume I have the capability to work with legal entities here, which is bullshit I don’t. It’s just three things and it’s based around amateurism.

1. Allow athletes the right to talk and work with agents and other professionals.
2. If a player doesn’t get drafted they reserve the right to return to college – they have 1 week after the draft to declare
3. Allow athletes to profit off of name, image and likeness – again, this will be dependent on legal parameters in place

Why are we trying to hold on to this ‘pureness’ of college athletics? It’s a business like anything else. Also, these kids don’t necessarily have it as fair as others due to having to do something for a year before they go to the NBA Draft. Yes, they can play in the G League or overseas, but is that the same? How many people actually want to live overseas as an 18-year old?

There are ways to do this too. Teams can sell jerseys without a number of a player on a team. For instance if Duke sold ’32’ this year, that money would go to Laettner. If it’s truly a brand and not the player as people who are anti-paying players for their likeness yell about, this is one way around it. Same for autographs. Let them go make money by going to a local store and getting paid for autographs. Either people will show up to pay money or not. There’s no harm there.

That’s all the truth. If the players are getting extra money or a sponsorship are we really not going to pay attention? Are you still not going to eat 100 wings and drink 100 beers during the first two days of the NCAA Tournament? No. It’s still going to be the same, it’s just going to be out in the open. I see no problem with that as we all had a scientific guess that this is already going on.

There will still be awesome stories even if this does happen and become open. There will still be a Steph Curry who blows up out of nowhere or a VCU run to the Final Four. In fact, you’d probably see more people cheering for the underdogs as teams like Kentucky, Duke, Arizona, UNC, Kansas, etc would become even bigger heels. I’d venture to say there’s be even more interest to see what people perceive as true amateurs try to beat these paid college players.

Ultimately that’s what needs to be addressed. You can form all the commissions, committees and bring in whomever you want. But, until you address the ability to benefit from image and likeness the fundamental issue of amateurism will never be addressed correctly. I’ve said multiple times. You can’t just have the schools pay the players. That’s not a realistic option. What you can have though is these kids being able to make money off their image and likeness. If a car dealership determines that Jalen Brunson is worth $5,000 to use his face on an ad, let that happen. Who is it hurting?