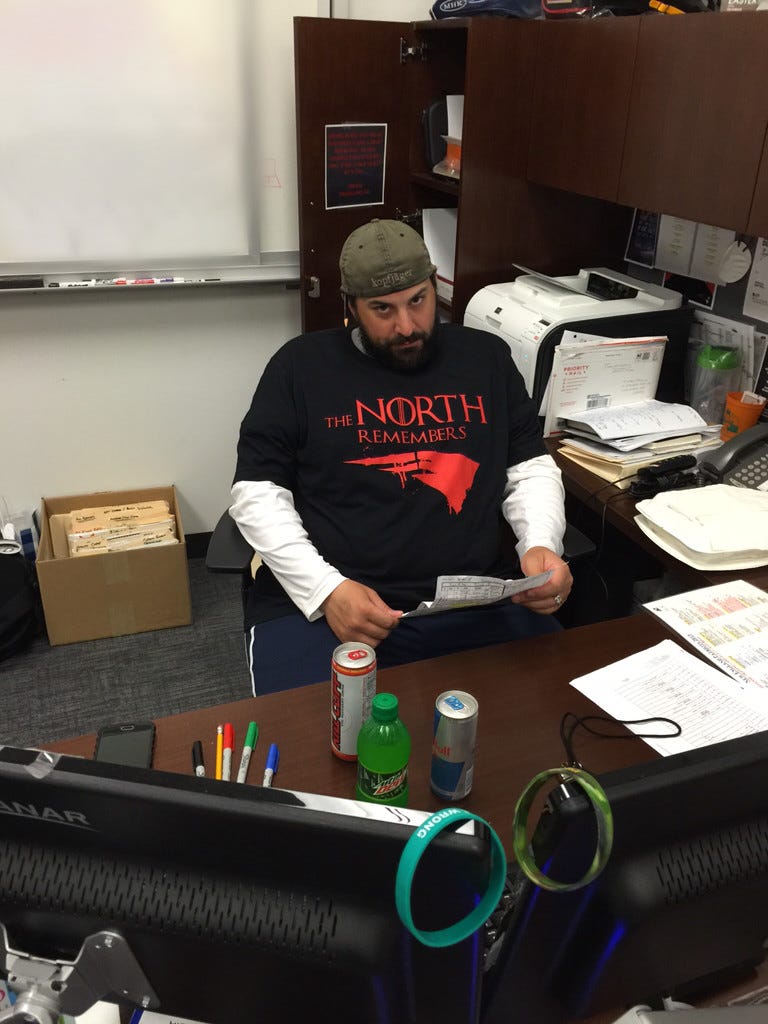 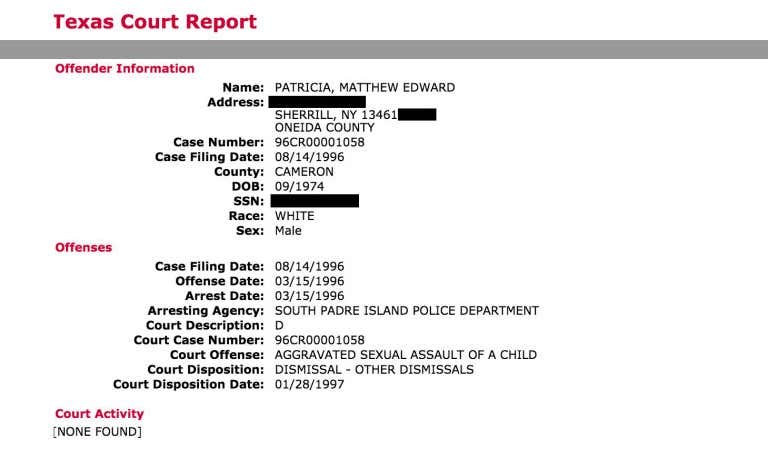 She was a 21-year-old college student at a large university; they were two football players and Theta Chi fraternity brothers at Rensselaer Polytechnic Institute in upstate New York.

On the evening of March 15, 1996, the woman told police that two men burst into the upscale hotel room where she was sleeping and took turns violently sexually assaulting her, according to court records and a news account at the time. They were arrested, charged and later indicted by a grand jury on one count of aggravated sexual assault — but they never stood trial and were not convicted.

One of the indicted men was 21-year-old Matt Patricia, who was hired as the head coach of the National Football League’s Detroit Lions in February. The other, his friend and captain of RPI’s football team, Greg Dietrich, 22. …

When approached by The Detroit News, team president Rod Wood initially said “I don’t know anything about this” — but hours later said his review of the situation only reinforced the team’s decision to hire Patricia.

“I am very comfortable with the process of interviewing and employing Matt,” Wood said. “I will tell you with 1,000-percent certainty that everything I’ve learned confirmed what I already knew about the man and would have no way changed our decision to make him our head coach.”

Wood also said the woman recanted the sexual assault allegations multiple times — a claim not substantiated by existing records or lawyers for Patricia and his fraternity brother.

Statement by Matt Patricia – “As someone who was falsely accused of this very serious charge over 22 years ago, and never given the opportunity to defend myself and clear my name, I find it incredibly unfair, disappointing, and frustrating that this story would resurface now with the only purpose being to damage my character and reputation. I firmly maintain my innocence, as I have always done.”

This was inevitable. As we as a civilization work to push the Sexual Assault Pendulum away from the Harvey Weinsteins, Matt Lauers and Eric Schneidermans who saw rape as a job perk, eventually we were going to be presented with a case like this. A 22-year old accusation where we haven’t the first clue what actually happened.

Before we go too deep into this, there’s one thing we have to keep in mind. “Indictment” is a pretty powerful buzz word. You hear that and it conjures up images of mob bosses being perp walked into SUVs by serious men in law enforcement jackets.  But in a situation like this, it really doesn’t mean much. In almost 20 years of working in the courts I barely paid attention to anything but what I was going to post on Barstool over my lunch break. But I learned enough to know that an indictment is nothing more than an allegation. To get one, a district attorney goes before a grand jury in secret session. The accused isn’t there. No other lawyers are there. The DA just lays out a case for why charges should be brought. Period. It’s just the first step toward finding someone guilty. If convicting someone of a crime was winning the U.S. Open, the indictment would be the decision to drive to a pro shop to buy a set of clubs. And the standard is incredibly low. As the old expression puts it, you can get an indictment on a ham sandwich.

So with just this to go on, there’s not much else to say. Matt Patricia and Greg Dietrich could be Princes of Darkness, bursting into a coeds hotel room and forcibly raping her. And maybe she didn’t pursue it out of fear and intimidation. Or maybe nothing happened, and she didn’t pursue it because nothing happened. Or perhaps the truth lies somewhere in the vast, planet-sized middle between those two poles. Unless and until the woman in question comes forward, all we have is that Patricia and Dietrich were briefly charged with doing something unforgivably horrible, until the weren’t. And somebody picked now to make sure the Detroit News made it public.

Matt Patricia seems like a good guy and he’s a diehard Stoolie so here’s hoping nothing happened and he’s telling the God’s honest truth. But for now, the people who really have to answer for themselves is the entire Detroit Lions front office. How can a franchise worth a billion and a half dollars make their most important hire and find out he was once indicted for rape by reading it in the Detroit News? How do you not spend the one minute it would take to do a LexisNexus search on your presumptive new head coach and print off the court record I posted? I mean, it’s not a perfect system. Notice under “Court Offense: AGGRAVATED SEXUAL ASSAULT OF A CHILD” when the complaining witness was 21 years old. But if you had it, at least you could hand it to him and ask, “Say, Matt? If you raped a woman on Spring Break of ’96, you’d like, tell us, right?” They have no choice but to back their guy to the hilt and hope nothing more comes of this. But them simply not knowing about this has to be the most Detroit Lions thing since they went 0-16.