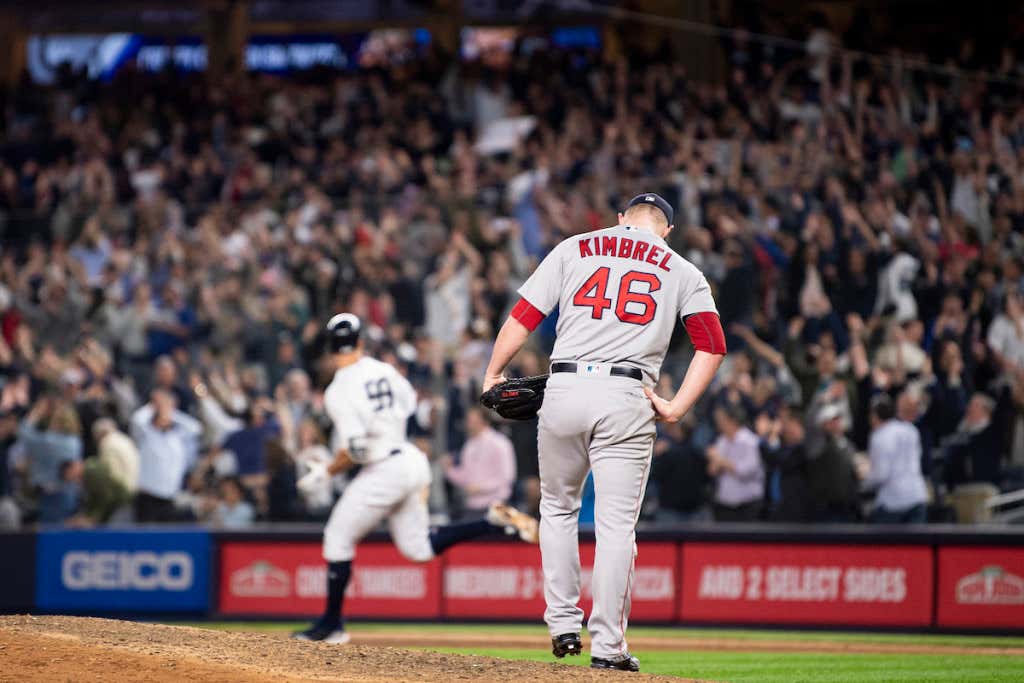 Fuck, man. The Yankees just cannot lose right now. All you can do is tip your cap. Whenever it looks like they’re dead, it’s just a matter of time before they come back and bury you. That being said, there are a few things that you need to keep in mind, as overreactions are probably flowing freely right now in the streets of Boston — it took the Yankees going a ridiculous 17-1 in order to catch the Red Sox. The Red Sox started off their season 17-2, and the Yankees are simply taking their turn. You knew they weren’t a 9-9 baseball team, and now they’re proving it.

But it’s not like the Red Sox have been playing stellar baseball over that span, either. With the loss on Wednesday night, the Red Sox are now 8-9 since the start of New York’s 17-1 run. Even if the Red Sox played half decent over the last two weeks, they could’ve held off the Yankees’ relentless pursuit of eliminating Boston’s 7.5 game lead in the division. And, of course, they had two chances so far to cool them off and did anything but that. Kind of a double whammy situation there. Nothing you can do about the Yankees steamrolling everyone else, but the Red Sox have done nothing to stop them when given the chance in head-to-head competition so far in this series.

Best case scenario is you avoid the sweep on Thursday, and get the fuck out of the Bronx with your tail between your legs, happy to have a share of first place after getting bested in the first two games of this series. The worst part is that both of those games were winnable. Like I said after game one, you had no business winning in a Luis Severino matchup against Drew Pomeranz on the road, but Pomeranz wasn’t the reason why they lost. It was Heath Hembree melting down in the late innings. Then you have a situation in game two where Rick Porcello didn’t have his best stuff, allowing five earned runs, yet you still got the ball to your closer in the 8th inning with a one-run lead.

It was Matt Barnes who left a mess behind for Kimbrel to attempt to clean up, but Kimbrel has to get those outs. He has to, and he imploded. Barnes allowed a leadoff double to Neil Walker, got Miguel Andujar to ground out, and then walked Gleyber Torres. Kimbrel came in to face Brett Gardner, who had already doubled twice, and gave up a two-run triple on a 3-2 fastball, and I knew it was over after that. Aaron Judge’s two-run bomb was just salt in the wounds at that point.

I love that the Red Sox and Yankees are powerhouses at the same time again. It’s great for baseball. It’s great for two of the biggest markets in the game. I mean, I don’t think I’m alone in feeling like these games have felt like playoff games the five times that these two teams have squared off against each other, and it’s VERY easy to lose sight of the fact that it’s only May.

Bragging rights are what it’s all about, which is why we pay such close attention to the standings even now, but there’s a long way to go before this division is settled. The Red Sox weren’t as good as they were when they were 17-2, and the Yankees aren’t as good as they are now on their 17-1 run. The Red Sox certainly are not as bad as they have been on their current 8-9 stretch, just as the Yankees weren’t as bad as they were when they were 9-9. That’s baseball, baby. Peaks and valleys. It’s May 10, and we’ve gotten one hell of a taste of how good both of these teams can be, but again, we’ve got a long way to go.

In the series finale, it’s CC Sabathia versus Eduardo Rodriguez. Sabathia has been great this year, and has always been tough against the Red Sox. In the last three years, he’s 5-1 against Boston in seven starts and has a 2.47 ERA with 33 strikeouts in 43.2 innings. This year, he’s got a 1.39 ERA with 23 strikeouts in 32.1 innings over six starts. His last time out, he threw six shutout innings against his former team, the Cleveland Indians.

Rodriguez is facing the Yankees for the first time this year, and had a 4.09 ERA with 11 strikeouts in 11 innings over two starts against New York last year. After posting a pretty solid 3.63 ERA over his first four starts of the season, Rodriguez has allowed five earned runs in each of his last two starts. He did, however, strike out ten batters his last time out.