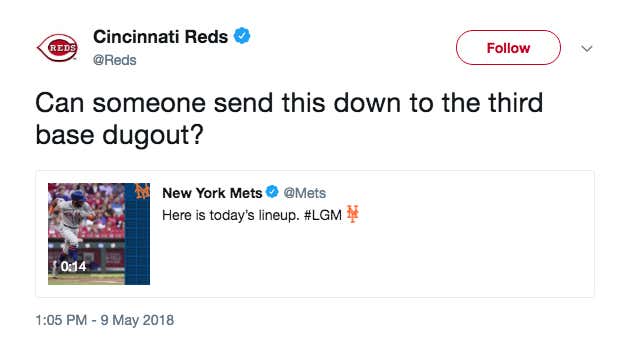 GOD FUCKING DAMMIT!!! I try to be an optimistic Mets fan or as least as optimistic as one can be after all the years of ridiculousness. From potential Hall of Famers snorting away their chances for Cooperstown to players throwing bleach and fireworks at reporters and fans, to all the busts, collapses, PR nightmares, and heartbreaking losses. Oh yeah and the yearly reminder from that dickhead Rovell on July 1st that Bobby Bonilla is getting P-A-I-D yet again for a contract he initially signed before George W. Bush was in office.

But I cannot turn the other cheek when a team bats out of order. My Twitter feed is full of writers and fans that say they have legitimately never seen this in their entire lives. People that have watched or covered professional baseball 162 games a season for years and years say this is something that’s never been done before. Like 8 kabillion games and they finally saw something new. Peak Mets shit.

Some people would say that’s something you do in Little League. But as someone with a pretty goddamn good memory, I don’t remember my teams batting out of order once. NOT ONCE. If the manager told you that you batted after the kid in glasses or the fat kid, that’s when you batted. If you forgot, you asked the manager again or checked the lineup card in the dugout. Literally Day 1 shit. I honestly didn’t even know it was possible to bat out of order in the Majors. I figured there were the most basic checks and balances in a professional dugout that would stop this shit from happening. The Mets even broke the Play By Play tracker on ESPN.com because the programmers probably said “No Major League team is dumb enough to bat out of order”. Those programmers clearly aren’t Mets fans though.

I had to go to MLB.com to find out Jay Bruce batted out of order, and even then it doesn’t explain to you that The Assman had a double taken away because the team is braindead. 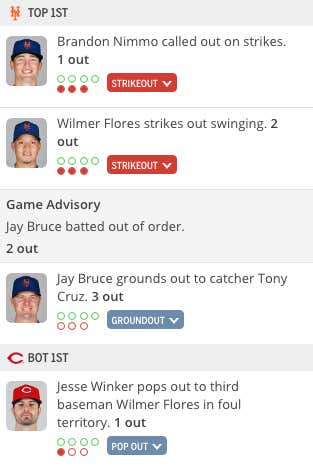 Finally after bouncing around the internet, I finally found out what happened on Fox Sports.

What the fuck are Mickey and the other assholes dressed in uniform despite the fact they don’t play in the game doing that we can’t make sure the lineup is right? I was told Mickey Callaway was the greatest thing to come out of Cleveland since LeBron took his talents to South Beach. But instead we have another Good Year on the tire fire of embarrassment known as the Mets franchises while Mets fans react to this news like they react to every other story coming out of Flushing.

I also can’t wait until Mike Francesa shits down the throats of all the assholes in the dugout that allowed this to happen. LOLMets indeed.