Ever wonder what happened in the hotel bed before you got there? This. This is what happened. A woman Hulk Hogan leg dropped her anus onto a man’s face then violently bounced her asshole off his mug like a Chevy Impala with a freshly installed hydraulics kit.

When she pulled off her unmentionables, I got legitimately concerned for this bottom’s well being. He was flailing his arms like Olive Oil from Popeye. Those cords weren’t doing much to restrain him, but the quarter ton of woman meat on him was doing the trick just fine. 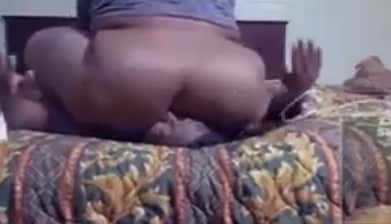 It is very important to watch this with the sound on as well, not only to hear his muffled cries for help or grunts of horrific pain, but to hear her endless stream of shit talk the whole time. “I tried to tell ‘em, I ain’t no rookie to this shit.” No Precious, you certainly aren’t.

She has a future in wrestling, sure, but there’s no doubt she’s already a millionaire sex worker off of acts like this alone.

The only question is if she’s more of a Yokozuna or a Rikishi.