PFT – Bill Parcells knows a lot about football, and more than a little about drama.

So while the rest of the football world is fascinated by the apparent quarterback-coach-owner power struggle in New England (with a little Gronk thrown in for flavor), the legendary former coach and Bill Belichick-mentor shrugged it off in a recent interview with Gary Myers of The Athletic.

“I don’t pay any attention to that,” Parcells said. ” Nobody knows what’s what exactly. You are just hearing gossip and conjecture and opinion. I don’t put much stock in that. Having been in a position myself as a head coach, a lot of things are said about an organization, the coaching staff and the owner. Some of the things are just flat out not true. Yet they get out and they get publicized because they make good headlines. The only thing you got to do is watch the product on the field. When the season starts, all this offseason stuff, it doesn’t mean anything. Nothing.”

So while there are some very real reasons to wonder about the future of the Patriots, personality conflicts don’t hold much interest for Parcells. …

“I wouldn’t underestimate them,” Parcells said. “Their track record is illustrious. You know, all things come to an end. We all know that. New England had quite a few players last year that couldn’t play defensively because of injuries. Some of them are coming back. Defense was one of their Achilles’ heels. If they can improve there, we know they are going to have the firepower. They have a prolific passer. They have [Julian] Edelman coming back, Gronkowski is a target. They have some runners. Their back is a very, very good pass receiver. They got that young back from Georgia [first-rounder Sony Michel], who looks like he can score touchdowns if he gets a step or so. I don’t see anybody right now in their division that I would say has the upper hand on them, that’s for sure. If you can win your division, you are a long way down the road to doing something.”

One thing I’ve always noticed about famous, successful, accomplished people is they like to begin stories with “People are always coming up to me and asking …” I say this as a famous, successful, accomplished person who has people always coming up to me and asking me things. Invariably, about the Patriots. And for the last five months, the first question has, in almost every instance, been about this topic.

I get it in bars. Stores. Barstool Radio. Local radio. Podcast interviews. Friends. Neighbors. I just did a charity golf tournament where I was one of the celebrities you could golf with along with my new best friend in the world, Steve Grogan: 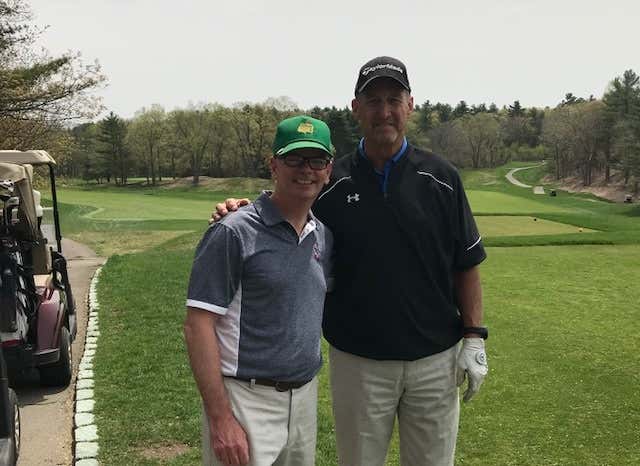 And it was only a matter of time before my playing partners asked me what I’ll call from now on The Friction Question. About five holes, to be exact. Here they were in the presence of a man so tough he quarterbacked in the NFL with a fricking fullback’s neckroll:

and the world’s preeminent Patriots writer, and the talk was all about the Telenovela drama that has been the Patriots 2018.

Up until now, I’ve said almost exactly what Bill Parcells said. Don’t pay any attention. Gossip and conjecture and opinion. Some of it is flat out not true. Makes good headlines. When the season starts, none of it will matter. Illustrious track record. All of that. And nobody can relate to a little conflict among highly successful Alphas working together on a common goal can get blown way out of proportion:

So it’s comforting to hear from Parcells who, in spite of all the bad blood he had with Belichick and with Mr. Kraft, nevertheless gets it. And validates everything I’ve been saying all year.

I admit I’m getting worn down from it. To the point I feel like I’m thisclose to just give up shoveling sand against the tsunami of negativity and just go along with the mob of Friction Question Truthers on this. But then I read what Parcells has to say. I see Gronk and all the receivers planning a passing camp at Brady’s ranch in Montana this summer. And I see the coach building for this year, and next and the years after and I come to my senses. So I remember instead that we’ve been hearing this same bullshit now since Belichick got here. Since the Fractured Lockerroom Theory when he benched Drew Bledsoe. Since Tom Jackson’s “They hate their coach.” Since the Herald writer called Belichick “duplicitous pond scum.” Since he supposedly lost players’ respect during Spygate and the Mona Lisa Vito press conference when he [cliche alert] threw Brady under the bus. And the winning just continued.

So next time someone asks me The Friction Question, I’m just going to remind them that they’ll win the division. And as long as you win your division, you are a long way down the road to doing something. Thanks to Bill Parcells for talking sense. I needed that.