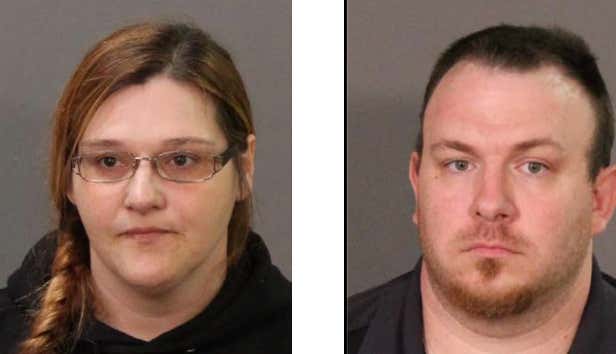 Syracuse, N.Y. — A Port Byron couple made up a story that their child had cancer in order to illegally solicit about $3,000 from sympathetic donors, according to the Cayuga County Sheriff’s Office.

Martin and Jolene LaFrance were charged with scheme to defraud and endangering the welfare of a child on Friday, according to the sheriff’s office.

Deputies, acting on a tip, discovered that Martin and Jolene LaFrance solicited money under the guise that their son, CJ LaFrance, was battling Hodgkin’s lymphoma. After a four-month investigation, the sheriff’s office “conclusively” learned that CJ was never diagnosed with cancer or any other medical condition.

I’m pretty sure that everybody on earth that has a kid isn’t lying when they say parenting is the hardest thing ever.  I know the dads in the office drag their lifeless bodies in here every morning looking like they just did 12 rounds with Mike Tyson.  I’ve had friends that used to party on Tuesday nights like we were in the clubs of Ibiza have a kid and be able to spend like 40 minutes on their feet tops without needing to lie down.  Seems like a nonstop, tiring, pressure filled grind, where you’re constantly wondering if you’re doing the right thing and if your kid is gonna turn out okay.

Having said that I do think one part of parenting is pretty easy – don’t convince your kid he has Hodgkin’s lymphoma which is then upped to Stage 3 lymphoma requiring 3 chemo sessions per week with multiple lymph node removal and a malignant abdomen tumor that’s not improving so that you can pocket 3,000 bucks and meet the Syracuse football team

That’s kind of a basic one that even the youngest most immature parents can figure out.

All CJ LaFrance could say was “Thank you.” Over and over again.

The 9-year-old diehard Syracuse football fan was invited to practice on Monday and got to meet all of his favorite players.

He played catch with receiver Erv Philips and linebacker Kielan Whitner. He exchanged throwing tips with quarterback Eric Dungey. He received well wishes from every member of the Orange’s coaching staff, including head coach Dino Babers.

And at the end of practice, linebacker Zaire Franklin brought CJ into the team’s huddle and let him break down a “Family” chant.

It’s been a difficult year for CJ, who was diagnosed with Hogkin’s lymphoma in January and recently had his diagnosis upped to Stage 3 lymphoma. He’s already undergone a full round of radiation, is about a month into three-per-week chemotherapy sessions and has had multiple lymph nodes removed via surgery.

Unfortunately, doctors have not seen significant progress. And in recent weeks, they discovered a malignant tumor in CJ’s abdomen.

“He has not been getting better,” Roe said. [Syracuse]

Investigators discovered that Martin and Jolene LaFrance received about $3,000 in donations via a GoFundMe page, which appears to have been deleted.

“I am truly humbled and at a los(s) for words, thank you all from the bottom of my heart, your generosity and compassion are simply amazing and overwhelming,” Martin LaFrance commented on the page.

Horrible.   Hope the THREE THOUSAND DOLLARS and practice walk-through with the Orange was worth a lifetime of psychological trauma for your son and a nice new brand of Scumbag Parents of the Year!