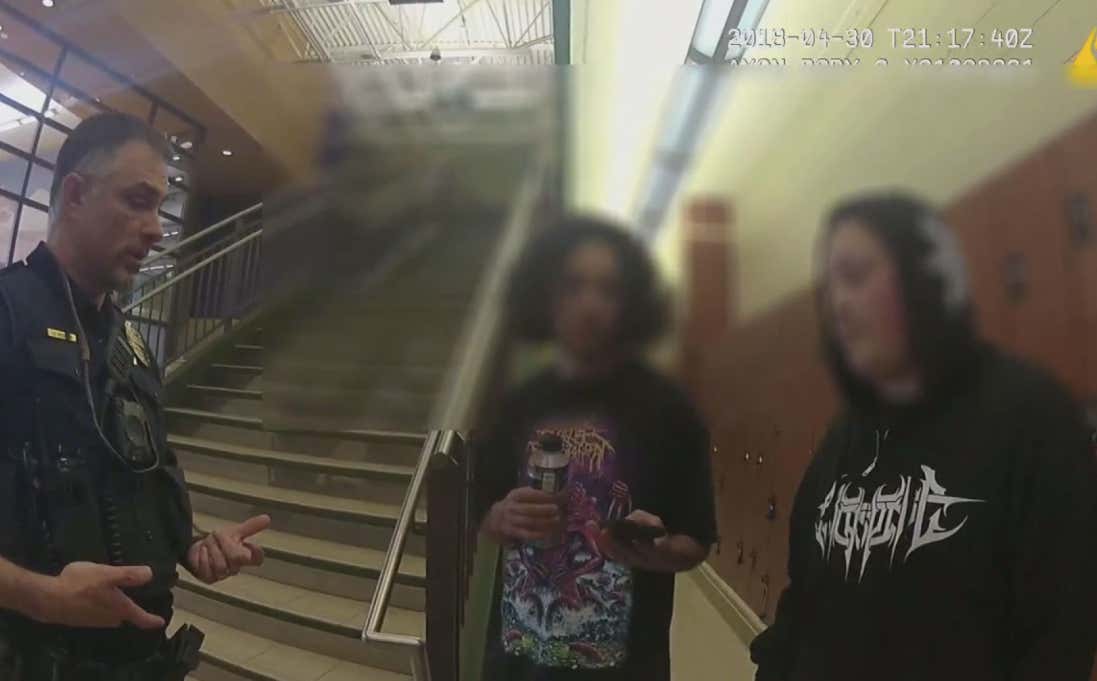 Source –  For the two Native American brothers, Colorado State University was their dream school. But when they showed up for a campus tour, a parent of another prospective student called the police on them because they apparently made her “nervous,” the school said.

Friday, the university’s police released the audio of the 911 call in which the parent reports 19-year-old Thomas Kanewakeron Gray and 17-year-old Lloyd Skanahwati Gray. sShe says their behavior is odd and that they’re wearing “black clothing.” The school also released footage of officers pulling the teens out of the group to question them.

The teens saved their own money to take the family’s only car and drive seven hours from New Mexico to Fort Collins, Colorado, to visit the campus Monday, their mother told reporters with CNN affiliates KOAT and KRQE.

“A parent participating in the tour called campus police because she was nervous about the presence of two young men who joined the tour while it was in progress,” the school said. ” She says the Grays’ behavior is “just really odd” and that they are wearing dark clothing with “weird symbolism or wording on it.”

In the body camera footage, two officers approach Thomas and Lloyd, whose faces are blurred. The officers ask whether the boys are with the group and tell them someone called because they joined the group after the tour started and they were quiet. When asked why they didn’t respond to questions by people in the group, the boys say Lloyd is shy.

The police and the Grays make small talk while Lloyd searches through his emails to find one he received after registering for the admissions tour. When he finds it, he shows it to the officers and the boys are permitted to rejoin the group.

In an exhaustive statement to the school community, Colorado State University President Tony Frank said the university was trying to reach out to the Gray family but had been unsuccessful.

Something tells met the Gray boys aren’t going to be attending Colorado State University in the fall. Despite the best Twitter efforts of CSU,  they’ve probably moved on to exploring other options.

Obviously, you feel bad for everyone involved. The police look like assholes because they come off as racist for responding to a call about non-white kids even though they were just doing their job. The university because they have a PR nightmare. And the Gray brothers because their dream college just ripped them off a campus tour after a white lady got nervous. A part of me feels bad for the mother too. The university released the full transcript of the 911 call and you can tell she’s conflicted.

“I think they’re Hispanic, I believe,” the mother says, when asked about whether they were white males. “One of them for sure. He said he’s from Mexico.” The mother says she feels “ridiculous” and that she’s never called police on anyone before. “If it’s nothing, I’m sorry,” she says. “But it actually made me like feel sick and I’ve never felt like that.”

I understand where she’s coming from. Especially with all the gun violence going on in schools, but in situations like this a little common sense goes a long way. Maybe go talk to them and get a vibe before you call the police. A simple conversation could’ve prevented the entire situation.

I remember I toured UConn  when I was seventeen and was in awe of the entire experience. I was young and wide-eyed and knew nothing about anything, but it was great feeling to be checking out a college campus for the first time. I didn’t get in because I failed Algebra One, but that’s beside the point. The point is these kids had that feeling taken away and that sucks. Not all hope is lost, though, if I were them I’d start a GoFundMe or shoot a few Tweets at Ellen. They may be able to squeeze a few dollars out of the situation. Best of luck to the Gray brothers. Hopefully this situation sorts itself out and everyone has a smooth start to next year.