Reader Email – yo! I’m from Columbus Ohio (Upper Arlington) and yesterday my highschool (Upper Arlington High School) #16 in the nation and we were playing Moeller Academy who is number 3 in the state and it is the classic Public vs Private school matchup. We were chirping their bench during pre-game and this dad of Moeller said this to me.

We’re still only 5 months into this new year but I’m willing to bet we see this lax dad make it to the very end when the Hardo Of The Year award is announced. It’s a short video but this jackass was still able to fit so many perfect one-liners into the mix here. I mean even without saying a word, this dude had the “Hard Ass Dad Who Will Wants To Ruin Your Life” look down to a T. 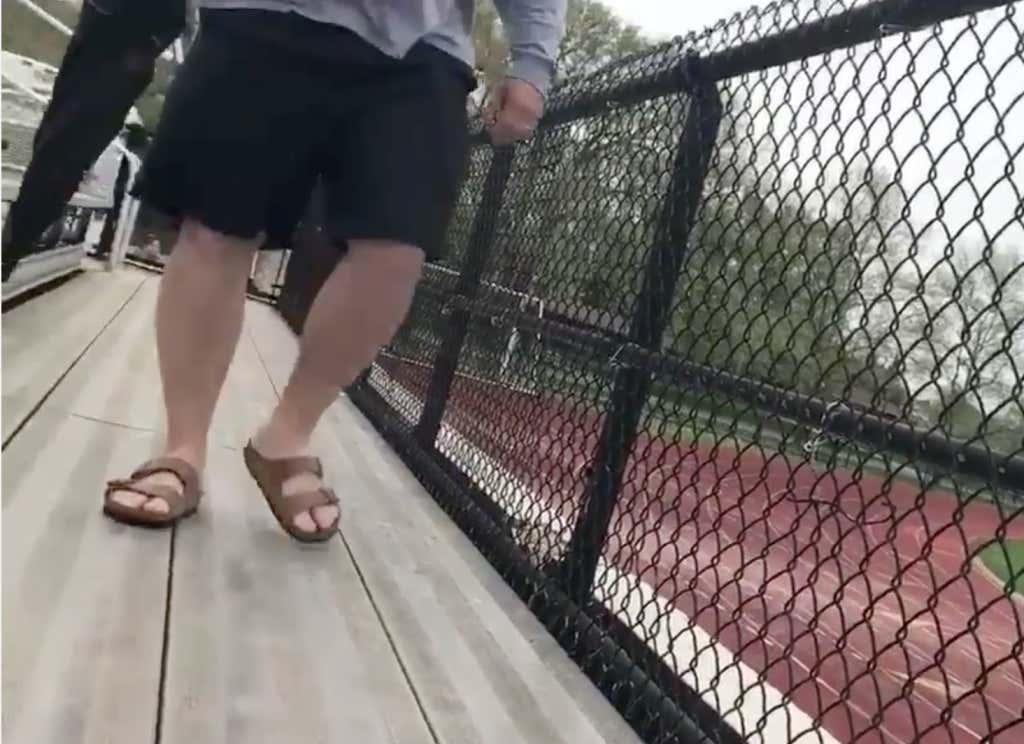 I mean the weather is clearly shitty out judging by the umbrella and the fact that this video comes from Ohio. But our guy over here is still rocking shorts and sandals. I don’t know at which age this happens or how many kids you need to have before it happens, but I feel like one of the most telling signs of a hard ass dad is that he never wears pants. It could be -30 degrees out and he’ll still be wearing shorts at the very least, most likely sandals/flip-flops as well. He’s also got that “I have no problem with telling a 14-year-old kid that isn’t even my child to go fuck himself in his own ass and threaten to murder him” type of gut going on as well. So even if you watched this video on silent, you know exactly what is going down. But then he starts talking.

“I don’t know if you’ve ever had your ass kicked before, but you act like you haven’t”

Right out of the gate, you know this dude is a bully through and through. You know we’re in for a show. This dude could smell the fact that these kids have never been in a fight from a mile away. It’s so condescending. It comes as a complete and total lack of respect. Bully 101 right there.

“I used to eat little pussies like you all the time”

Kind of a weird thing to say out of context but I can tell he didn’t want to straight up rip the Shooter McGavin line and say “I eat pieces of shit like you for breakfast”. So he had to change it up a little bit. I can’t fault him for that one coming out a little weird. Either way. I don’t know if this guy is a hockey fan or not but if he is, I can 100% guarantee you that he’s the kind of guy that refers to Sidney Crosby as “Cindy Crosby” unironically without fail.

“I wish you were of age”

Again, a very bizarre thing to say to a group of teenage boys out of context. I get the sentiment here and understand what he’s going for. But with the right amount of editing, this video could easily send him away for 10-15.

“And when you shoot your mouth off, I think I might just grab you by the ear and drag your fuckin’ ass right out of the stadium”

Such an outlandish threat if we’re thinking about this realistically. I mean just think about how much hand speed and precision you need to have to actually be able to grab this kid by the ear. And then not only do you have to snatch him by the ear, but then you need to have enough strength and leverage to use that ear grab to physically remove this kid from the stadium. Plus he’s already carrying an umbrella in what I am assuming is his strong hand. This threat does not live in the realm of reality but neither does this man. And that’s what makes it so perfect.

I will say this, however. While this dad has all the signs of being a star in the making, it took a ton of balls for that kid to break out the “what number is your daughter?” line in the face of adversity like that. I mean you’ve got a grown ass man threatening to kick your ass while you’re just sitting there and you still pull that one out of your ass? It’s impressive to say the least.