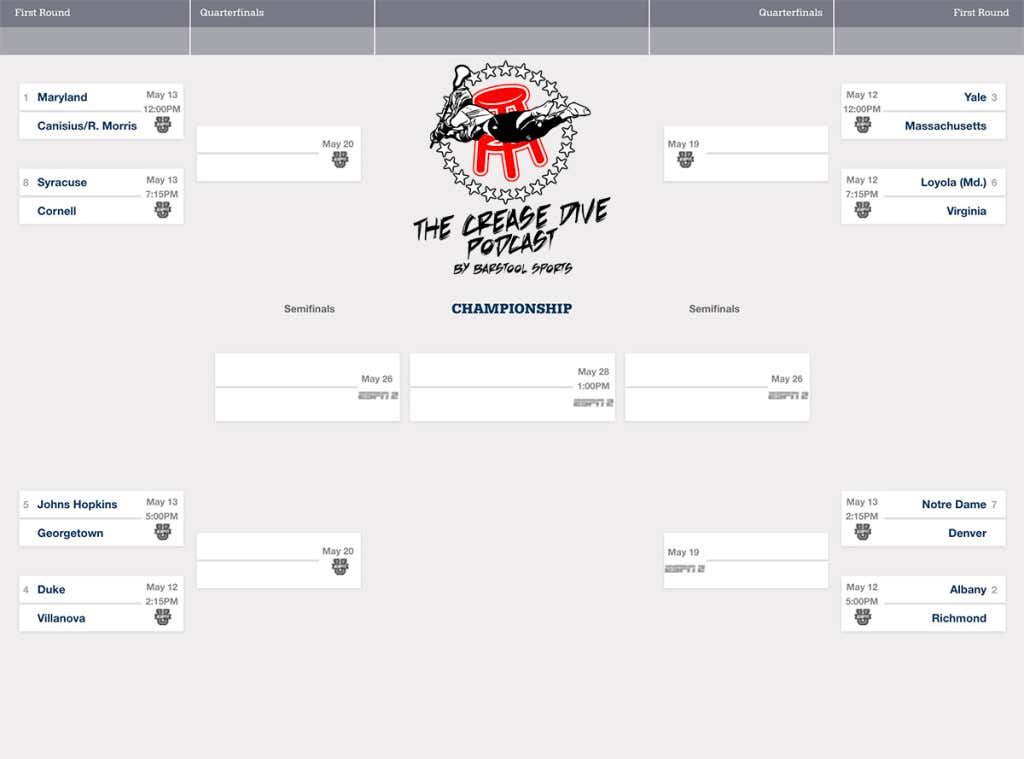 And just like that, only 17 teams are left. Last night the 2018 NCAA DI Men’s Lacrosse bracket was released and… well… I’d say it’s pretty damn close to exactly what everybody should have expected. It’s for sure not a perfect bracket but obviously the committee was never going to come close to being perfect. I mean the fact that the Big East has 3 teams in the tournament while the Big Ten only has 2 is ridiculous. In no world does the ACC deserve 4 teams in this year but obviously conference bias plays a huge role there. Syracuse hosting a 1st round matchup at 8-6 after going 4-5 out of conference makes little to no sense. But at the end of the day, the best teams are still going to find a way to make it to Memorial Day Weekend so who really gives a shit? The bracket is set and that’s all that matters.

So last night The Crease Dive boys hopped on Instagram Live (@thecreasedive) to give our instant reaction to Selection Sunday. Robby O was was in Florida for a wedding all weekend and I was trying to figure out how to use Instagram Live for the first time so if the show seemed a little chaotic and unorganized at times, it’s because it was. But I thought the show went relatively smoothly regardless. And in case you missed the Instagram Live show, here’s the podcast version of our Selection Sunday Reaction Show.

And for all you non-iTunes jabronis, listen here on SoundCloud

By the way, my prediction for the 8 at-large bids yesterday were Maryland, Notre Dame, Duke, Denver, Yale, Syracuse, Virginia and Ohio State. Apparently Ohio State waited a little too long to get hot so they got bounced in favor of Villanova. But other than that, it was pretty easy to see the other 7 get their names called in this one.  And real quick, here’s one thing I’ll say regarding “snubs” like Rutgers, Bucknell and Ohio State. Do I think it’s bullshit that the ACC got 4 teams in? Absolutely. But for teams especially like Rutgers and Bucknell, you need to realize that the selection committee has this ACC bias. And with that in mind, you have to do absolutely everything you can to not even make it a question. You can’t lose to Maryland twice, Hopkins and Ohio State and still expect the committee to go to bat for you. If you pick up a win against maybe one of those teams, then it’s a different story. But to go 0-4 in those games doesn’t mean that you got snubbed, it just means that you fucked up and didn’t earn a spot in the tournament. Sorry for being blunt but that’s the truth. Same thing goes for a team like Bucknell after losing to BU to end their season.

By the way–my Final Four prediction is Maryland, Duke, Loyola and Notre Dame. History repeats itself.