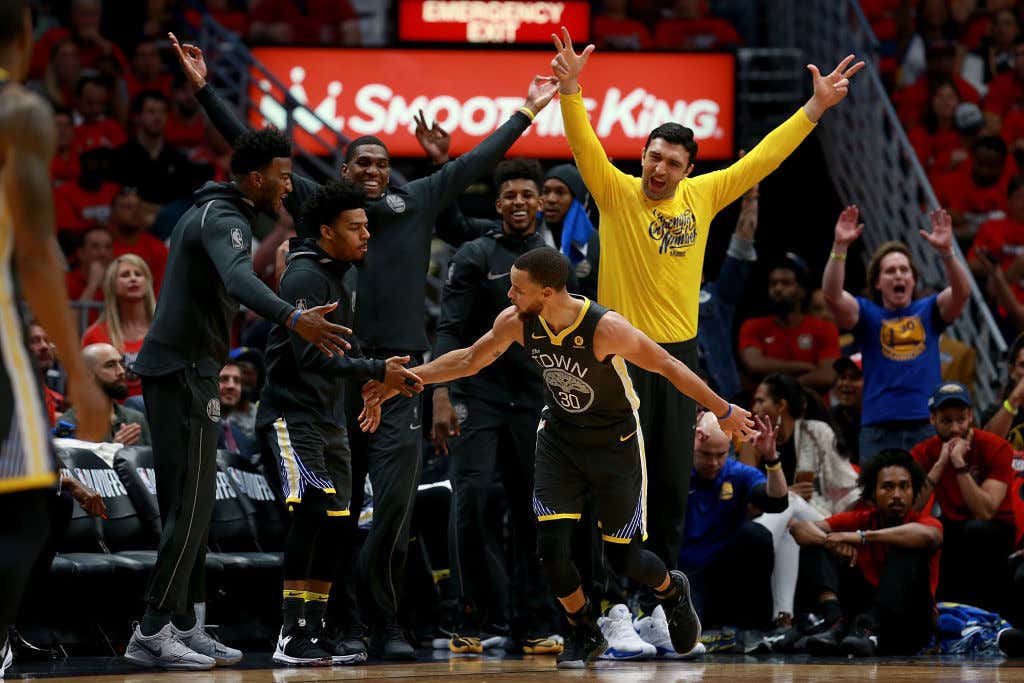 Nothing like a wire to wire win to take control of this series from Golden State. After getting blown out themselves in Game 3, I can’t say I’m all that surprised by what we saw today. We knew GS would come out looking to right their wrong, and remind the Pelicans and the rest of the NBA just how good they are. And here’s the thing, Curry and Klay didn’t even  shoot that well! Instead it was Durant who carried the load with 28/9/5 on 15-27 shooting, and you could tell right from the jump that the Warriors were playing with more energy and did a much better job at imposing their will. They got off to that 37-22 start after the first quarter and from there on could really coast. Games like this are what make the Warriors so tough, even on “off nights” from their stars, guys like Draymond throw up a 8/9/9/4/2, doing a little bit of everything and next thing you know you’re getting your shit kicked in.

Compared to Game 3, the Warriors were also a million times better on the defensive end in the second half. The Pelicans scored just 38 points and shot 35/0%. They missed all 15 of their 3PA, and it doesn’t take a rocket science to know that in order to beat the Warriors you do in fact have to score the basketball. If the Warriors are going to play this type of defense moving forward, we can just consider this series over and look forward to HOU/GS.

If you’re the Pelicans, this is a pretty disappointing loss given how well you played in Game 3. But the fact of the matter is they simply couldn’t make their shots. They ended the day with 36.4/15.4% splits while also comitting 19 TOs. Those things usually don’t work well together. Those 19 turnovers led to 21 Warriors points, and when AD goes 8-22 and nobody else really steps up, that’s how blowouts happen. That Game 2 loss really stings now, and it will take a miracle effort from NO to steal Game 5 up in Oakland. This series had it’s moment, but just like every other second round matchup, appears to be ending in a matter of days.