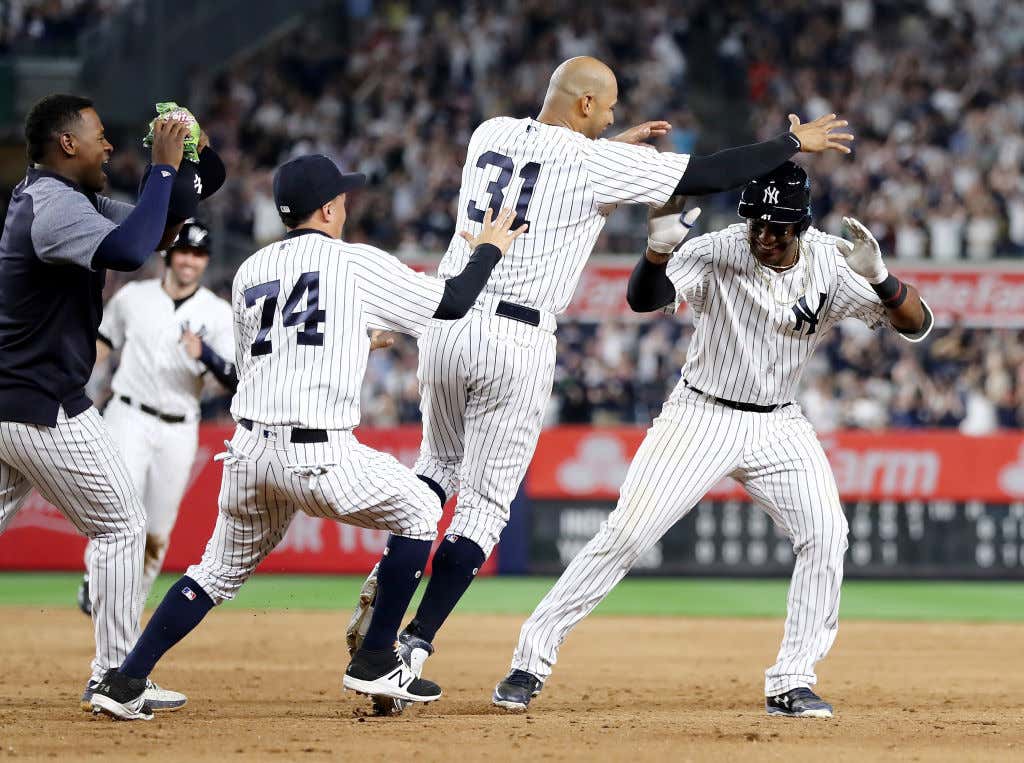 What a fucking baseball team folks. I am losing words to describe what I’m watching with my very own two eyes, but I keep saying the same thing lately: 2009. This team never says die, just like in 2009 when they seemingly came back and walked off every single win. It’s May 4th and I’ve already got goose bumps writing these blogs because you can see how special this bunch is.

One of the stars of the night was rookie phenom Gleyber Torres. I spent part of my day writing about how his trade from Chicago might go down as Cashman’s greatest moment, and there have been many keep in mind. Torres got the Yankees on the board in the 4th when he blasted his first career big league home run.

Torres had pretty much down everything except hit a home run since being called up so it was awesome to see him get this moment. I have to add that the fan who caught the homer made the web gem of the night with his one-handed grab. Gleyber would single later in the game in the 8th to give him his fifth multi-hit game since being in the big leagues. I absolutely love this kid.

To go with Torres’ homer, Aaron Judge and Gary Sanchez both delivered blasts off of Josh Tomlin. Gary’s was an absolute cock shot.

CC Sabathia started tonight and kept up the recent trend of dominant starting pitching. Tonight he went six fantastic shutout innings, striking out seven and walking no one. His pitch count dipped into the high 90s and Boone decided to pull him right there. CC wanted to go further, but I was content with yanking him there and getting into the pen. He lowered his season ERA to 1.39 which is the lowest he’s had through six starts in his entire career. Carsten fucking Charles.

Replacing the fat man was Dellin Betances and he was rock solid as well, striking out two in a scoreless frame. Dellin has been sneaky very back over the last two weeks.

Credit to Boone here for putting him in perfect situations to get his confidence back. He’s now a guy I’m okay with using in a tight game in the 7th. We still have a ways to go for him to be my everyday set-up man again, but progress is certainly being shown.

Chasen Shreve took over in the 8th in a 5-0 game and was downright horrible. You just knew Shreve’s numbers were going to come back to Earth at some point and tonight was that night. He entered the game with a 0.75 ERA through 12 innings, but we all know what kind of pitcher he really is. Shreve did not record an out tonight, giving up four runs on three hits on just SIXTEEN PITCHES. He left the game with an infinite ERA on the day. Something you certainly never want. He’s the reason heroics were needed later in the game.

David Robertson checked in to try and maintain the Yankees lead, but served up a bomb to Yankee killer Jose Ramirez. Just like that CC’s great start had gone to waste and the game was tied. I got a sickening feeling in the pit of my stomach.

The Yankees rallied in the bottom of the inning on a single and three walks off of Alexi Ogando to regain the lead thanks to great at bats by Walker, Torres, Gardner, and Judge. They took a 6-5 into the 9th where Aroldis Chapman waited to try and get three final outs.

You could tell immediately Roldy didn’t have it tonight. He was missing all over the place, wild with every fastball he threw. After a Yan Gomes lead off single, Chapman got Raja Davis to strike out, but then hit Bradley Zimmer to put the tying run in scoring position. With two strikes on Lindor he uncorked a 102 mph fastball that Gary had absolutely no chance on as it sailed wide left and bounced wildly off the backstop. Both runners moved up as the winning run advanced to second. All of a sudden the Yankees were going to lose the lead for good it seemed. Chapman got Lindor to strike out looking on an amazing fastball that froze Frankie. That put the game on the bat of Jason Kipnis. Lucky for Kipnis, he didn’t have to do a thing as Chapman let loose a wild two strike fastball that sailed over Gary Sanchez’s glove and brought home Yan Gomes to tie the game. I think the ball was catchable and probably on Gary this time, but then again it was 102 mph that wasn’t close to the strike zone. Gary couldn’t even get his glove on it and would’ve needed an incredible reaction to prevent it from heading to the backstop. Roldy would thankfully get Kipnis to strike out on a check swing and allowed the Yankees to walk this off in the ninth. Like they have during this crazy stretch, they did not disappoint.

With Cody Allen in for the Tribe trying to send this baby to extras Giancarlo Stanton stepped to the plate and ripped a leadoff double into right center on the first pitch he saw. After Gary and Hicks were retired and Walker walked, rookie Miguel Andujar was due up to try and play hero ball. The impressive rook came through in the biggest of spots, looping a 1-2 curve into shallow right center to win the game.

Andujar was mobbed by his teammates who chased him out into the outfield. It was an awesome moment for Miggy who, after struggling to begin the year, has become a weapon at the bottom of the order. That was his second hit of the night and it gave the Yankees their fourth win in a row, and 13th in their last 14 games. This team was once 9-9 and now they’re 22-10. Fucking incredible.

Barstool at the Ball Park tomorrow for game two of this series. It’s going to beautiful out. Let’s get drunk and win another baseball game.