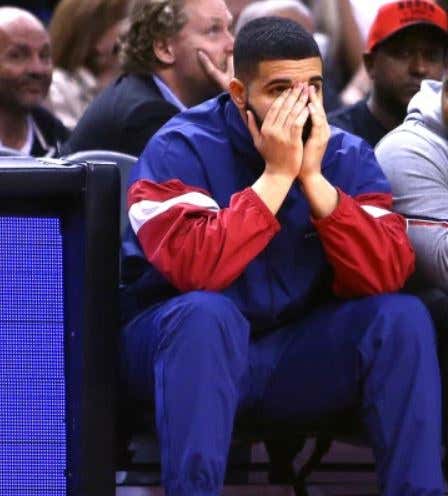 Ok so I’ll admit that after Game 1 in Toronto I thought Drake needed to calm down. That he deserved to be beaten up for his sideline antics. The NBA even told him to calm down and stop acting like an asshole and getting in fights with players.

But my god that was depressing watching him last night. The guy looked like somebody ran over his puppy. Yeah I know the Cavs crushed the Raptors but it didn’t matter. He was defeated the second he sat down. Lifeless doesn’t even begin to describe how lifeless he was. I’ve seen more energy in a library. He looked and acted like somebody who just got put on their parents knee and spanked. The difference between game 1 and 2 was flat out startling. Listen I’m not saying that Drake is officially dead but he may be officially dead.  Like his music career may be in jeopardy.  You truly hate to see it.