And that was the difference, folks. A few centimeters is all it takes sometimes. Watch the gif and you can see how close Holtby was to hitting it off the line when he was on his stomach, facing the other direction: 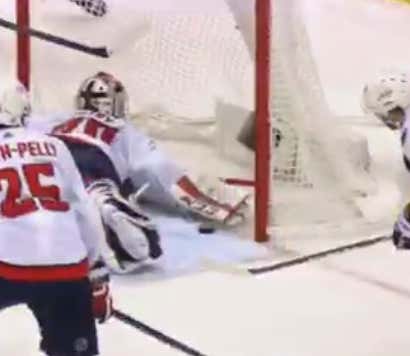 THERE. If he moves his blocker a quarter of an inch more, Malkin can’t fly in and put it over the goal line. Game of inches though, just like the no-goal in game 2.

For the game, I thought the Caps played…fine. Trotz was the weak link in this game- wasting his challenge, keeping DSP on the top line when he wasn’t getting anything going at all, and then the too many men penalty with a minute left. When down 1 goal in the 3rd, Trotz not putting Backstrom on the top line instead of DSP was questionable at best. You have to make in game adjustments and he just didn’t. Ovi clearly needed something switched up and it just didn’t happen. Very confusing.

Besides that though, it was a big time a grind it out, physical game. Caps could have used some offense from…literally anyone. In the 3rd period the Caps started running the “Shoot it 100 MPH at the Pens defensemen legs” play, which was fun for a bit but getting pucks on net when Matt Murray’s glove has been so, so bad would have been more optimal.

So on we go. Game 5 at home on Saturday after the Derby. The series is now a best of 3 with home ice. I still feel good about it.