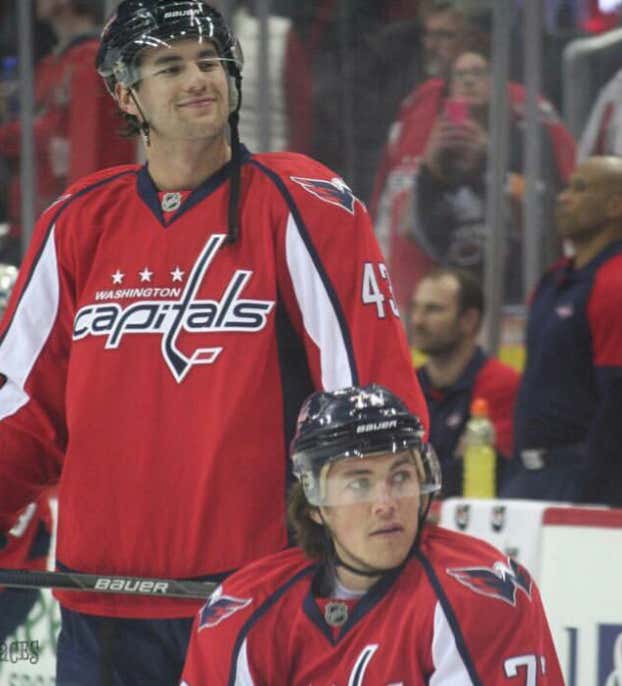 ESPN – One day after Washington Capitals forward Tom Wilson was suspended, teammate T.J. Oshie on Thursday said Wilson has been unfairly “taken away” by the NHL.

“The discipline? I think it’s pretty extreme. I think it’s very extreme, actually,” Oshie said. “It’s two guys that see each other. They both go to hit each other, and usually one guy loses that battle. I’ve been on both ends of it.

“I think for sure — and I want to get this point across — you never want to see a guy break his jaw and leave a game like that. I don’t know what the concussion status is, but I’ve had that before and I wouldn’t wish that on anyone. I agree with [penalizing] the stupid hits, the unnecessary hits. But this is playoff time. It’s man vs. man. If one guy falls down, that’s just the way it goes.”

TJ Oshie has been on the receiving end of a concussion a couple too many times. He knows the feeling. He knows the pain. But he also knows hockey. And he’s saying more eloquently what I said yesterday- when two guys, one Tom Wilson’s size, and one 6 inches shorter, are going after each other on the ice, one guy will always lose. “It’s man vs man. If one guy falls down, that’s just the way it goes”.

The problem here is you can get hurt from clean hits. Tom Wilson has injured guys by hitting them before, and he will again. The NHL just can’t pick and choose how they penalize hits, clean or not, based on severity of injury. One inch to the left or right, with the same intention, speed, and basic point of contact, maybe ZAR is lacing them up tonight. It’s sort of like how the same high sticking penalty can be 2 or 4 minutes depending if there was blood. It doesn’t make sense- a lighter high stick can draw blood if it happened at a different part of the face or angle- a lot of the time drawing blood means next to nothing in terms of severity.

Other Capitals players also disagreed with the three-game ban, which was handed down by the NHL Department of Player Safety.

“Yeah, very [surprised],” said Devante Smith-Pelly, who will replace Wilson on the Capitals’ top line alongside captain Alex Ovechkin. “… The night it happened, the league called and said it was fine. Shoulder-to-shoulder. We wake up the next day and see a hearing.

And to be honest, I thought his hit leading with the shoulder in game 2 was worse than the hit on ZAR in game 3, and the game 2 hit didn’t even get a hearing. So I mean, the NHL needs to figure it out. They can’t just keep throwing shit at the wall and hoping it works out in the end, because they went 5 years telling Tom Wilson his hits were clean, and now gave him 3 games in the middle of a huge playoff series. I think even Pens fans can agree that is bulllshit.