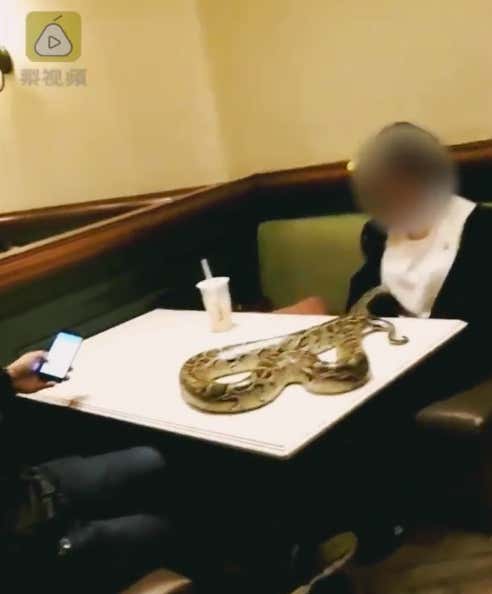 A restaurant manager lost his consciousness after seeing a customer brought along a pet python to have dinner in east China. A female customer came in the pizza restaurant with a python in her arms and sat down at the sofa seats. Other diners and staff members had to call for emergency services to send the manager to a hospital. The freak incident happened at Brier Pizza in Yangzhou of Jiangsu Province at night on May 1. Mobile phone footage uploaded on Pear Video captures a python sitting on a dining table and facing towards its owner.

The unnamed woman can be seen playing with her pet as she calmly puts her hands out to let the python glides towards her. ‘I have to record this to show that this is not fake. The snake is real, you see?’ said the woman who filmed the video. It’s said the male shop manager passed out when he tried to get the order from the woman. Other restaurant staff tried to wake him up but he failed to respond.

Why? Why do you have a pet python? Why do you feel the need to carry said python around with you at all times? Why must you scare the living fuck out of everyone in a harmless pizza restaurant? Well, that’s because it’s goddamn China and everything goes. Imagine someone came into Borrelli’s with a python?  I mean a python in a pizza place is an endangerment to everyone in the restaurant. You have to kill it.

The only other place I would guess this happens is Florida.  I feel like if you have to carry around your pet python in public you need a cage for it right?  You cannot be just carrying it around in your bag and plopping that monster on top of a table like it’s no big deal. There has to be consequences here, but then again it’s China. I could actually see the owner who fainted get punished for being mentally weak and as a result have his restaurant taken away. That’s why we don’t live in other countries folks. That’s why we can’t take for granted the great country we live in. When I go to get a slice of pizza at least I know some guy isn’t going to show up to the table next to me with a fucking anaconda.