In the unverified screenshot, the employee in question writes of being a “professional stalker” searching for hackers.

I’ve been out of the dating game for a while and my game was never described as “air tight” to begin with, but I still gotta imagine this is not the preferred pickup line for the new generation? 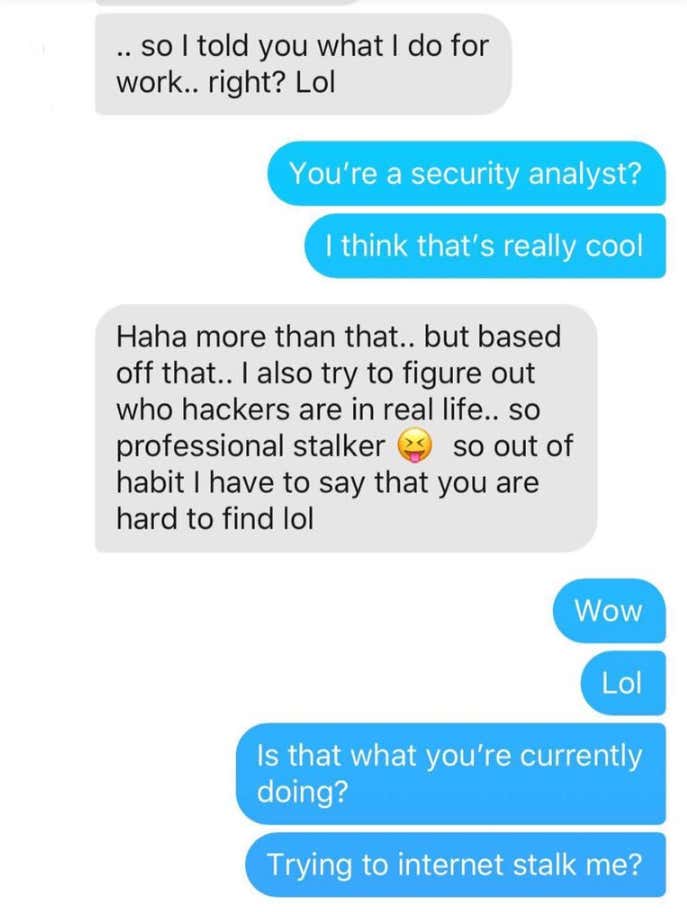 I mean normally you could play that off as a harmless joke.  Unfortunately when your company has been all over the news for the past month for literally stealing data and mis-uing personal information, it loses a little bit of the cuteness factor.  The entire Cambridge Analytica company just shut down because no one would work with them anymore following their little data harvesting situation.  Zuck is getting grilled by Congress and issued warnings from Parliament for not meeting with British MPs.  Now is not the time to be bragging about stalking women, Security Guy!

Despite all that, I DO think the whole Facebook security engineer position is an absolute panty dropper – once you get to the know the person.  Like you can’t lead off with “I know where you live and what your favorite books are and that your favorite movie in college was Boondock Saints.”  But once you’ve been on a few dates, have had a few sleepovers, actually like the person and a relationship seems imminent – dropping the knowledge on them that you can see any and everyone’s personal information is HUGE for a chick.  Ex-boyfriend user info and location, secrets about all your girl frenemies, blackmail material for the bitch ahead of you on the work totem pole.  Girls love that shit.  Just gotta wait to unleash it at the right time.