Harper went 3-for-5 with a stolen base and three RBIs, including his 10th home run of the season, which was hammered 416 feet over the center-field wall against right-hander Ivan Nova. Harper’s performance, combined with the hot hitting of Matt Adams — who homered for the third time in two games — and another strong start from Stephen Strasburg helped lead the Nats to their fourth consecutive victory.

“We’ll let it ride,” manager Dave Martinez said. “The boys are doing well. [Harper’s] getting pitched to a little bit, and he’s swinging the bat well. So we’ll keep it going. Matt Adams is doing awesome, too. They all are.”

Well this experiment is working fantastically. Bryce was walked a staggering 37 times in April. And then the person up after him, I can’t find the exact stat at the moment, but the person up after him batted something like .090. Without any sort of protection in the lineup, Bryce started slumping. So what did Dave Martinez do? Moved him to leadoff, made pitchers pitch to him, and it has been an overwhelming success thus far. He’s 4/8 with 4 runs scored, 2 home runs, and 6 RBI. And it especially works because Matt Adams is crushing it from the 3 hole, and Howie Kendrick is a hitting machine at cleanup. Once Rendon and Murphy are back, the lineup will be tweaked so it’s possible Bryce will move back down to 3 with Murphy hitting behind him, but for right now Leadoff Bryce is there to stay.

Last night’s HR pic was sensational by the way. It would be better as a gif because the way Pirates’ pitcher Ivan Nova swung his arm almost as if in disgust, but a good picture none the less. 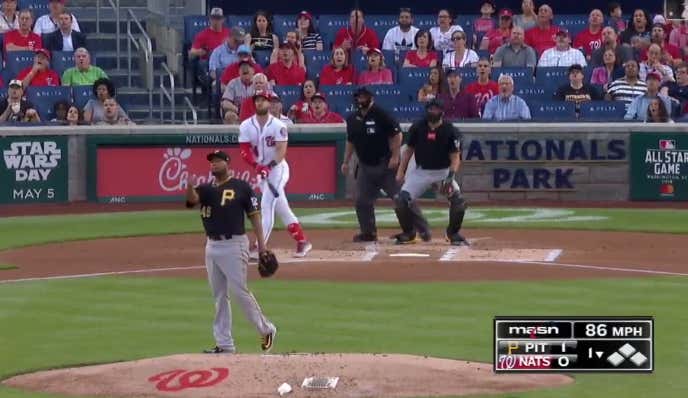 Two more things I haven’t mentioned- Strasburg had a standard 7 inning, 11 strikeout performance, giving up only 2 ER. Looks like he’s back to form after a couple shaky starts in late April. Shaky for him, not actually shaky by MLB standards. And Wilmer Difo stayed hot, extending his hit streak to 5 games, raising his average from .212 to .266 in that time. Nats are going for the sweep vs the Buccos today at 1:05. I smell another Bryce HR in the works.