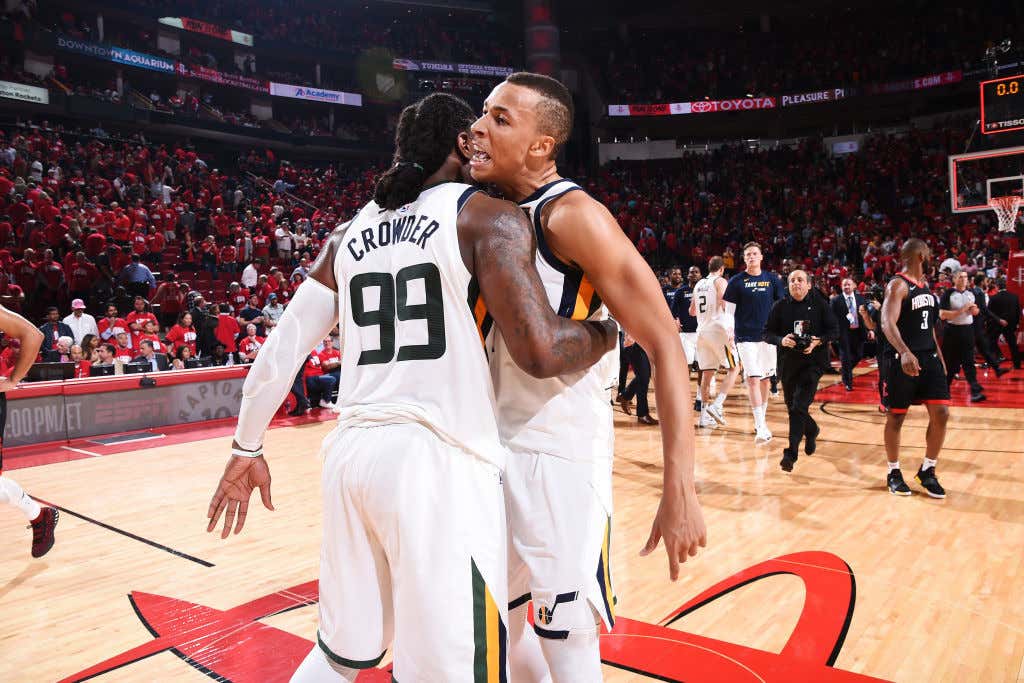 Happy Thursday everybody and welcome to another edition of Last Night In The NBA where we catch you up on everything that went down the night before in the NBA. Forget the fact that this game has already been blogged like 50 times already (playoff pageviews are no joke!), including mine from last night, I know you don’t want to work so I’m here to get you through the day. We had just one game last night, and while many may have thought HOU/UTA was going to be another quick series for the Rockets, last night sure looked like a series that could go the distance. Didn’t see it? Here’s what happened

The thing with the Utah Jazz is that if you paid attention to the last few months of the season, this shouldn’t be all that surprising. In fact, the way they got blown out in Game 1 was much more of a surprise to me than them pulling out a Game 2 win. This Jazz team is good, real good, and they have all the piece of the puzzle to have playoff success. They defend at a high level, they have shooters, and with Donovan Mitchell they have a difference maker who can change the direction of a series all my himself

The difference in  this game was clearly how UTA started. In Game 1, they found themselves down double digits before they could even blink, and everyone knows trying to come back from that sort of deficit against the HOU shooting is nearly impossible. Well last night the Jazz flipped the script, getting off to a great start with 36 first quarter points and a 9 point lead at the half. If not for a little mini Rockets run to close out the 2nd, things would have been even bigger. Offensively the Jazz looked more like the Rockets than HOU did, finishing with 51.8/46.9% splits, 15 3PM, and 25 FTA. You know things are going your way when you can turn it over 17 times on the road, against an elite team like HOU and still come out with the comfortable win.

They pulled it off because they were extremely balanced. While Mitchell wasn’t efficient with his 6-21, he was still effective. The 11 assists were nice, but the 3 TOs were more important, and at the end of the day he was a team high +13 and had a number of highlight plays. Rudy Gobert came back and matched Clint Capela which is going to be a huge part of his series, because if you remember in Game 1 Gobert didn’t take his first shot until the 4th quarter. He only had 7 in this game, but he felt much more engaged. And then what is there to say about Joe Ingles other than he is playing out of his mind. Ingles is at his best when you don’t ask him to do too much, just stand in an open area and knock down threes. Where he gets into trouble is when he’s forced to be a facilitator, but last night was one of those nights he was truly locked in. We saw it against OKC earlier this postseason, but this was a whole new level.

But more than the starters, the UTA bench showed up in a way you have to have if you want to pull off an upset. The 41 points coming from the UTA bench were huge, and guys like Crowder, who finished with 15/10, and Alec Burks who had 17/4/6

were huge factors. They say role players tend to play better at home, but if I’m looking at the production of Crowder so far this series, I see a guy who has found his stroke. He’s averaging 56/61% splits through the first two games, and that’s great to see if you’re a Jazz fan given how he started the playoffs shooting the ball. Now UTA returns home, where they are just as hard to beat with that crowd and an fired up Mitt Romney.

For HOU, it’s OK to admit if you’re a little nervous. That’s only human. You go all year running teams off the floor you don’t really expect something like this to happen. But now, doubt starts creeping in. Maybe this isn’t all that different from last year. Maybe CP3 and Harden will never figure it out. While I think it’s silly to go too overboard, I mean they still had guys who showed out

the problem is they have to figure out how to win when they aren’t making every shot. The defense from HOU that had looked so good for so long, looked nothing like what we remembered last night. Not many times will you see this Rockets team get down by 19, and it took all their energy to make up for that, which is why when things got to the fourth quarter they didn’t have anything left in the tank. They scored just 23 points over those final 12 minutes, which was their lowest scoring quarter of the night.

Personally I’m excited to see how this team responds to the adversity. Things have been a little too easy for the Rockets in my opinion. Normally, unless you’re GS, you have to overcome some hard times in your pursuit of a title. Just when it looked like all the second round matchups were going to be blowouts, at least we’re starting to see that isn’t the case. Teams like NO/UTA and most likely PHI tonight are not going to just roll over. Chances are HOU starts to make more shots moving forward, but that won’t mean anything unless they figure out how to get in front of the UTA shooters. Let’s see if they can figure it out

And that’s it! You’re now all caught up with everything that went down last night in the NBA. We’re back at it again with PHI/BOS and CLE/TOR. Two series that should be awesome to watch, and as always if you happen to miss anything just check back here tomorrow and I’ll fill you in!