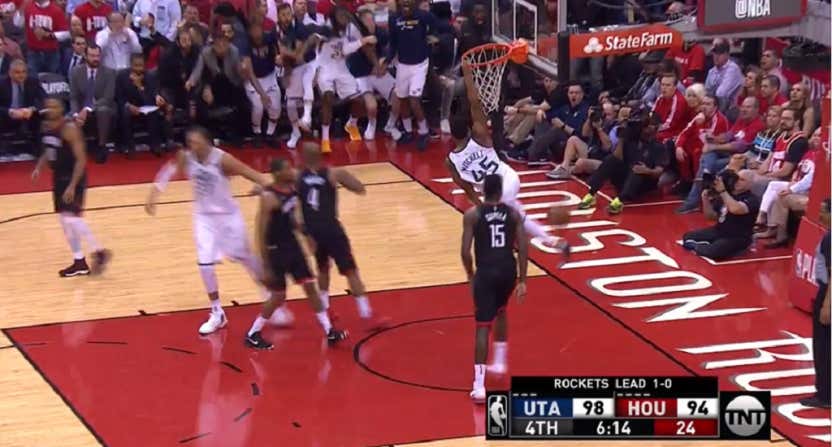 [ESPN] – “To be honest with you, I was just trying to shoot a floater and grab a rebound, but I just happened to be up there,” Mitchell said after the Utah Jazz evened their Western Conference semifinal series with a 116-108 win over the Houston Rockets in Game 2. “So I figured, why not come down with it?”

So last night as everyone was watching the Rockets/Jazz game this happened:

Figured I’d just come down with it. I’m almost mad at Mitchell for being that nonchalant about it.  Now, after watching the video, seeing the time and score of the game, go read Mitchell’s quote again. ‘I just happened to be up there.’ Yeah, happens all the time when I play too, Donovan. As someone who shoots a bunch of floaters when I get into the lane, I too happen to try and grab the rebound on a miss. Now, one thing I can say I’ve never said is ‘I figured why not come down with it?’

Now, enough about me and more about the REAL rookie of the year (sorry Sixers fans, but I’m sitting on Mitchell 14.5/1 and I’m a Knicks fan). Mitchell showed why he tested with the highest standing vertical at the combine last year. That second jump to get the dunk is unreal and I know there will be a bunch of hardos saying dunks are overrated, dunks happen in every game, hockey is better and I ask you if that’s true then why hasn’t there been a dunk in a hockey game yet?

Mitchell put on a show last night, especially when the Jazz needed it the most. After leading by 19, the Rockets were able to come back and take the lead. Then the Jazz went on a 16-2 run (this dunk was part of it) and Mitchell contributed on all but one bucket. Oh, not to mention Mitchell pitched in with 11 assists while he handled the point guard spot as Ricky Rubio missed his second straight game with a hamstring injury.

However, this wasn’t the only nasty play last night. These plays by Harden and Exum were both absurd: