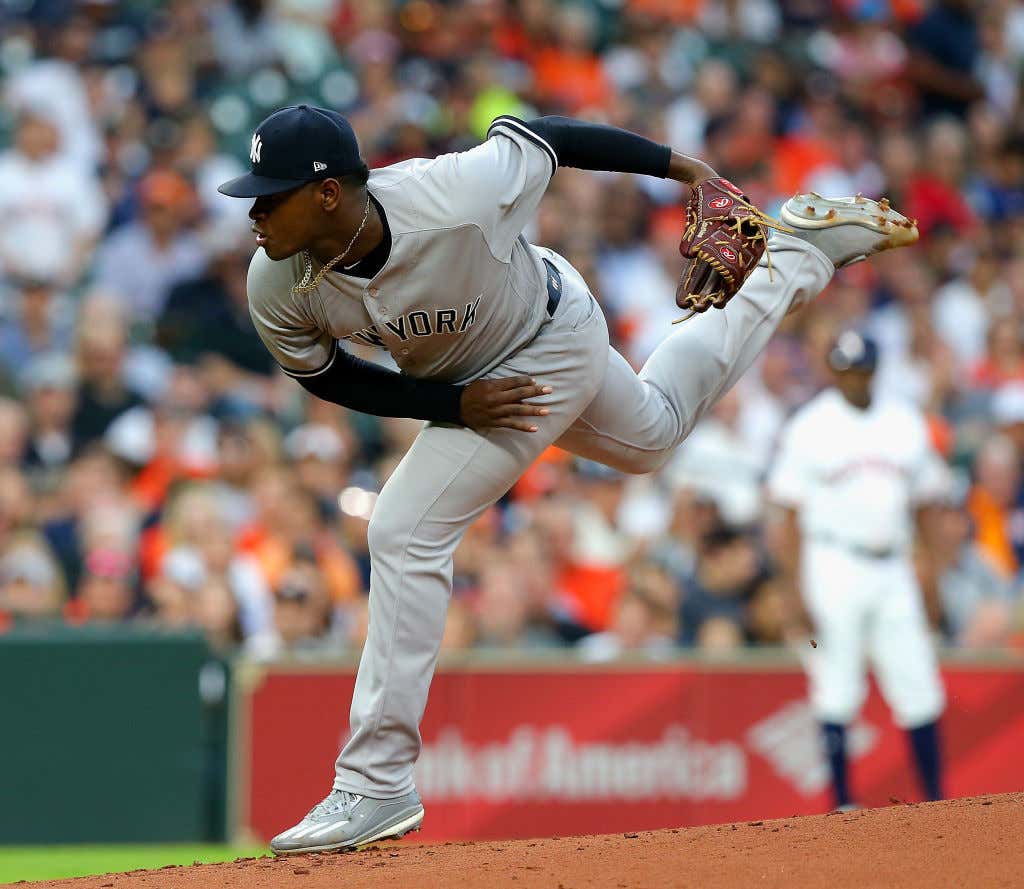 God Bless Luis Severino. That man took the ball tonight and flat-out dominated the Houston Astros. Riding off the momentum of Tuesday night’s grind-it-out victory, Sevy hopped on the mound and pitched like the ace that he is. You could tell by the 5th inning he was in a zone like we’ve never seen him before. After every single pitch he delivered, he demanded the ball back immediately. He was ready to throw the next fireball way before the hitter was ready. He was stalking his prey, knowing he was better than his opponent tonight. I said this in the middle of the game, but this was the best I’ve ever seen him look, and that says a lot considering what we’ve seen over the last year+.

In the first inning he was pumping out 100 mph and in the 9th he was pumping 100 mph. He never tired, he just got stronger. The only real threat the Astros had was in the 7th when Gurriel and Reddick both reached with back to back singles to lead off the inning. Alex Bregman hit a looping a liner in between 2nd and short, but Gleyber Torres made an outstanding play to rob the Astros third baseman.

Quick note: Gleyber’s defense so far has been so impressive. He’s the epitome of smooth out there and really makes every play look effortless, kind of like Cano did.

Sevy would then get Marwin Gonzales to strike out and McCann to ground out to first to end the threat. LuACE seemed to have a lot to prove tonight as he was clearly amped up from the beginning. In the top of the 9th as Severino was in the dugout with just under 100 pitches, he was pacing, ready to go out for the bottom of the inning and finish the job. Boone obliged and sent his horse out there for three more outs. Despite a two out double off the left field wall, Severino stayed out there for one more batter and got Bregman to fly out to Judge and complete the shutout. The ending stat line: 9 IP | 5 H | 1 BB | 0 ER | 10 K |

It was a fucking masterpiece that lowered his season ERA to 2.11 and improved his record to 5-1. He became the youngest Yankees starter to throw a shutout while striking out 10 or more in the last 50 years. He’s getting better after every start it seems, and he’s in prime position to not only contend for the CY Young, but this time win it. It’s just so unfair when you have a 100 mph fastball as live as his, to go with a devastating slider, and a 90 mph changeup. The pitch he really needed to work on in the offseason was that changeup and I’m willing to bet Pedro Martinez had a large part in its improvement. Thanks Pedro!

The offense of the night was powered by Giancarlo Stanton. He got things going in the first with this line drive homer just over the right field fence.

And in the 4th he continued to terrorize Dallas Keuchel with this laser homer that got out what seemed like a blink of an eye.

It’s good to know Giancarlo’s month of April was just a big prank. Now it’s time to dominate major league baseball. This whole team has been winning no problem pretty much without Stanton doing much. What on Earth is this team going to do once he starts seeing the baseball more consistently like tonight? It’s a scary fucking thought I’ll tell you that.

There was some pretty bad news earlier today as we got an update on Jordan Montgomery. Gumby was diagnosed with a left elbow strain and placed on the 10 day DL. He’s expected to miss about two months, but at least it’s not Tommy John. For now Domingo German will get the first crack at a rotation spot following his awesome appearance in relief on Tuesday. If that doesn’t work out I would expect Josh Rogers to get a chance before Chance Adams just based on numbers so far in 2018. As awesome as he may be, Justus Sheffield will not be getting the call up just yet. It’s just too soon in my mind.

Anyways, the Yankees improved to 5-1 during this super tough stretch where they face the Angels, Astros, Indians, and Red Sox. Before it started I hoped for 7-6 with anything better being viewed as an enormous success. So far, so good, let’s keep it up and get a series win tomorrow with Tanaka on the bump.

P.S. It’s a shame the Mets demise is beginning already. I actually love watching deGrom pitch so it really sucks to see him get hurt swinging the bat. The fucking Mets man.