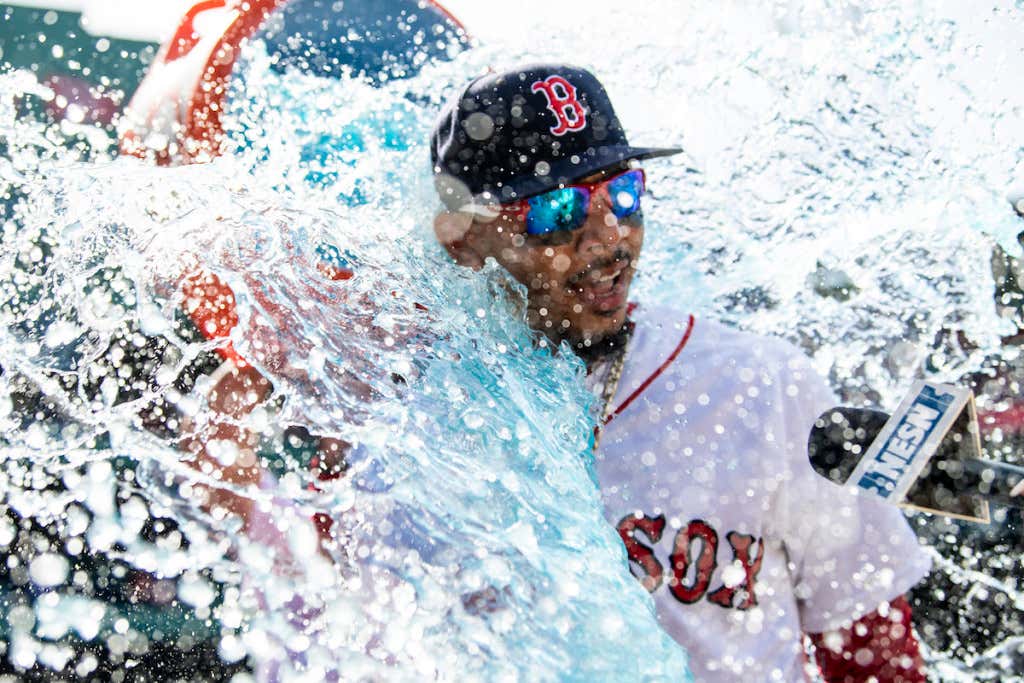 Give Mookie Betts a blank check yesterday. He’s worth every penny. He’s one of the best defensive players in the game, he’s one of the best base runners in the game, and after going 4-for-4 with his second three-homer game of the season today, he leads the majors in home runs (11), he’s a point behind Manny Machado for the highest batting average (.365) in the MLB, and his OPS leads the majors at 1.274, a hundred and fifteen points higher than the runner-up, Didi Gregorius.

The left-hander went six innings, which is essentially a max effort from that guy. Despite having a pretty good year in 2017, Pomeranz averaged five and a third innings per start last season so I’ll take six innings and three earned runs from him any day. The eight hits isn’t what you want, but he limited the damage and that’s all you can ask for when Pomeranz is on the bump.

It might seem like it was all Mookie today, but after falling behind 3-0 after two innings, JD Martinez hit a two-run bomb to make it a 3-3 game after Mookie had hit his first homer of the day. Over his last seven games, Martinez is hitting .481 with a 1.311 OPS, 2 doubles, 2 homers and 9 RBI.

We might have to have a talk about Jackie Bradley Jr. soon, unfortunately. After going 0-for-3 today, he’s down to hitting .188 with a .567 OPS on the year. Hopefully he snaps out of it, but if this nosedive continues, then the question of whether or not his defense is worth the automatic out will have to be asked. That question might have to be asked sooner rather than later when you have the combination of JD Martinez, Hanley Ramirez and Mitch Moreland hitting .326 with a .928 OPS. You don’t want to overreact obviously, but it’s going to get more and more difficult to justify keeping Moreland on the bench when he’s .323 with a .984 OPS compared to what Bradley has given you offensively, which is next to nothing.

The Red Sox now hop on a plane headed for Globe Life Park in Arlington for a four-game series against the last place Texas Rangers. It’s David Price versus Mike Minor in the series opener tomorrow night at 8:05pm. Price had an ERA of 1.95 before giving up that three-run bomb to Khris Davis in the 8th inning in Oakland, and it’s been downhill from there. He’s given up a total of nine earned runs in his last 13.1 innings over two starts. Time to get back on the right track for Price, because his most recent shit outing was against the Rays, who are barely a baseball team. Minor hasn’t been that great his last three times out, allowing 10 earned runs in his last 16.1 innings.