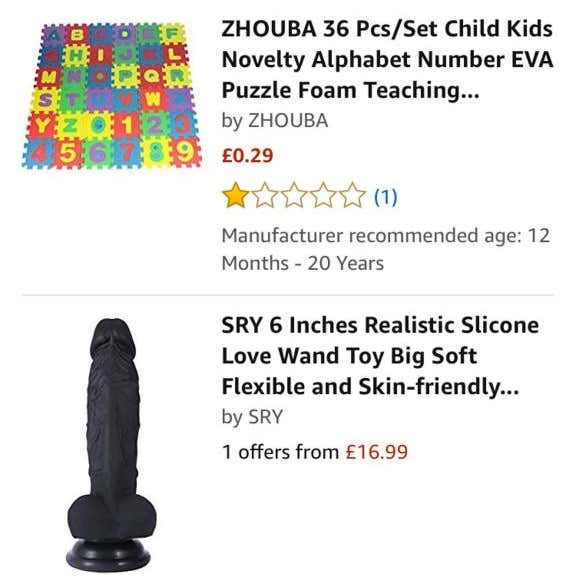 Source – A MUM was left in hysterics after trying to find garden ideas for a children’s party on Amazon – and being recommended a giant sex toy instead.

Jeni Dobson was looking for a last-minute gift for a friend’s son when she typed in “outside toys”.

The 36-year-old, who had been searching with her brother-in-law Ryan Thomas said: “We were in hysterics but quickly had to shut the screen.

“Maybe that’s what other people class as outdoor pursuits.

“We did wonder if it was waterproof. It was the fact that it’s also quite big and it’s suggested for outdoor use and for immediate delivery for those that can’t wait. It had us in tears.” … Jeni said she messaged Amazon about it on social media and they swiftly removed the offending item.

First of all, Jeni Dobson is the kind of mom who makes life worth living. Maybe they’re just naturally cooler about such things in the UK, but I have to think that if this happened to a mother in say, the Bible Belt, she’d be screaming about it on Facebook, getting interviewed on her local news, lawyering up and Amazon would be sending a SWAT team of grief counselors to her house. So kudos to her for keeping it fun.

That said, I doubt this was a screw up in the search software. If anything, this to me is Skynet becoming self aware. Because there is no one in the world who needs a sex toy more than a mother of young children in what I’ll call The Planning Kids Parties Stage of Life. There is no other time when your life is less your own than this stage. Kids are the center of your universe and mom is just in orbit around them. When you’re entire social life consists of going from one birthday party to another, standing around watching the same kids do the same funtivities while you make small talk with other parents and just pray they’re cool enough to serve booze. You’re basically off the grid. Current events are a total mystery. You have no contemporary pop culture knowledge. Between two kids (spaced 5 years apart) I went through this from 1996 to about 2004. So what when I go to trivia and the topic is music from that era, I go to the bathroom and tell my 30-somethings teammates they got it because I was listening to Radio Disney.

And Jeni was having 40 kids over? By my math, having 40 5-year-olds is like having 400 adults. It would less stressballing to host a wedding in your yard. So Amazon search knew what it was doing because she needs all the big, soft, flexible and skin-friendly realistic silicone love wand toys she can afford.