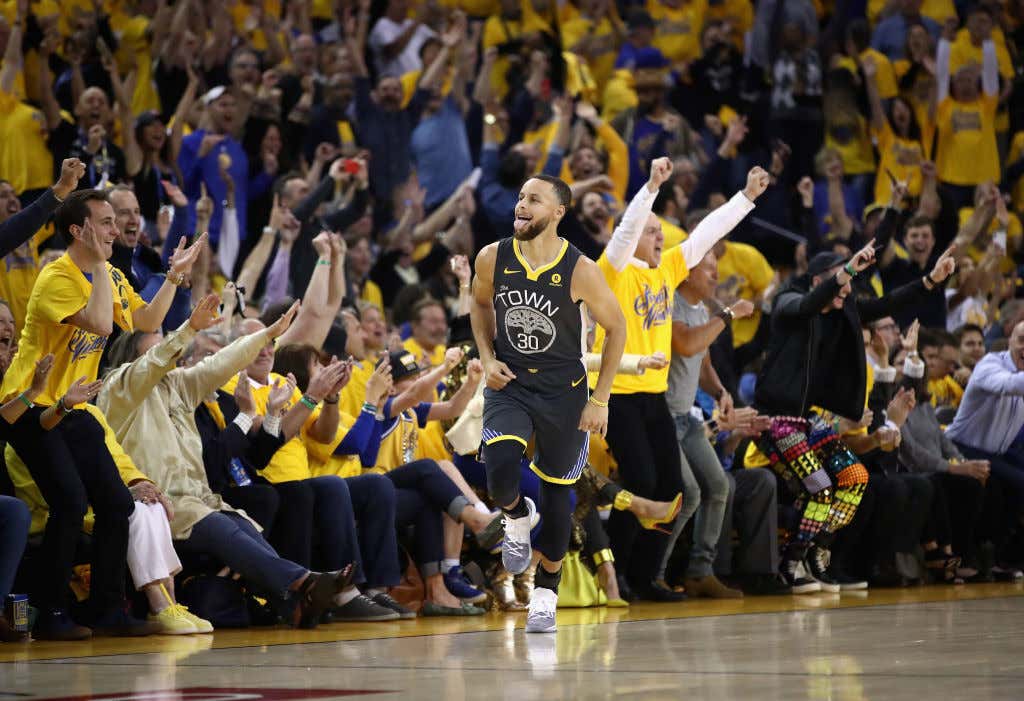 Happy Wednesday everybody and welcome to another edition of Last Night In The NBA where we catch you up on everything that went down from the night before in the Association. We got back to having two games, and the theme in both was the idea of returning. Lebron returned to Toronto and picked up right where he left off, and in the other game, a certain someone named Steph Curry is back, you may have heard of him. It made for another wild night of basketball, one that if you missed I advise you to keep scrolling. Here’s what happened.

I imagine it’s a pretty depressing time for those who call themselves Raptors fans. You are probably waking up pretty angry at what your basketball team did last night and I don’t blame you. That performance and that collapse was about as brutal as it gets. All year you play well, you become one of the best home court teams in the league, armed with two All Star level players and the best bench in the league. For what? Just do Lebron to come to town and do this to you?

While I respect Fred VanVleets passion, know that he would be destroyed by Lebron. When it came time to close things out, Lebron nearly had as many FGs in the fourth quarter as the entire TOR team. All the sudden Tristan Thompson couldn’t be boxed out with 3 huge OREB, then they CLE shooters were there to pull out dagger threes. Then things moved to OT and it was the same story. Two more OREB for Thompson and more dagger threes from JR and Korver. The result was a game in which CLE never led until the final minutes. One they were at once down 14 points, and had a 4 point deficit with 1:42 to play. But as we’ve seen so many times before, you give Lebron life, you give him just the smallest of chances, he is going to beat you. IND learned their lesson, and hell TOR should know this by now, and yet, here we are talking about the same old collapse.

Things sure do look easier when Lebron gets the help he so desperately needs, and he got it last night that’s for sure

Here’s something you definitely didn’t expect, the CLE bench actually outscored the TOR bench 37-35. The bench was supposed to be where these teams separated, but a prayer 16 point outburst from Jeff Green on 4-4 shooting came out nowhere, and next thing you knew one of TORs biggest strengths was neutralized. That’s going to be a problem for them if it keeps happening.

For TOR, this was a soul crushing loss. Yeah it was just Game 1, the series still has so much basketball left to be played in it, but we can all be honest here. They NEEDED to win Game 1, just for their own psyche. Instead they got an average performance from their two best players, with Lowry/DeRozan combining for 40 points on 16-32 shooting (it wasn’t as pretty as the numbers suggest)

But again, they couldn’t help themselves from collapsing. That all important fourth quarter, the one where TOR was 12 minutes away from taking control of this series, was awful to watch as a Raptors fan. The team missed 10,000 layups that all would have sealed the win, and as a team they shot just 20/20% in the final 12 minutes, going 5-25 from the flood. DeRozan and Lowry were a combined 1-5, and the result was the lowest scoring quarter of the game for TOR. At home.

Now I don’t see how the idea of self doubt isn’t making it’s way through that TOR locker room. All year they wanted things to be different, they had a great season, and they are learning the reality that many other teams do when facing Lebron. Nothing is different. He is still the best, and he still owns you no matter how hard you want to deny it.

Now let’s just hope they can put some games together and actually make this a competitive series, but I wouldn’t blame them if they just mailed it in.

After missing nearly 6 weeks with a knee injury, the two time MVP has returned to action. Call me crazy, but it feels like the seasons Harden/Lebron/Westbrook/Durant all had, that people may have forgotten just how goddamn ridiculous Steph Curry is at playing basketball. You could make the argument that he’s their most important player, even with all the talent they have and despite them looking dominant without him. Well last night sure helped that argument as Curry was a +26 on the court and the Warriors were a -21 without him.

Curry finished with 28/7/2/3 on 8-15 shooting (5-10 from deep) in his 27 minutes off the bench. It does not look as if there is any rust whatsoever which is pretty terrifying for the rest of the league. This was sort of that oh yeah moment where we always knew the Warriors so adding Curry at some point, but now that we’ve seen it, who is going to beat them? Certainly not the Pelicans. You add a fresh and didn’t miss a beat Curry with this sort of help

and this team becomes something serious. If we’re being honest, as good as Curry and Durant are, the biggest difference for me this playoffs for the Warriors has been how locked in Draymond Green has been. He’s a guy that sneaky struggled during the regular season at times, but since the playoffs have started he’s looked like that guy that nobody wants to deal with in a series. He’s doing a little bit of everything, including make threes, and if he’s going to continue to be a threat from deep, I’m not sure how you guard the Warriors.

At the end of the day they finished wt 47/32% splits, 13 3PM and 27 FTA. That’s a tough formula to overcome for an opponent, and then you realize Klay only shot 4-20 (wink wink) and that probably won’t continue, and I don’t know how the Pelicans do not have a broken spirit. The Warriors are just something stupid.

For NO, at least you put up a WAY better fight in Game 2. Granted you couldn’t get a stop to save your life in the fourth quarter, but this was still a much more competitive game than the first go around.

If I had to guess, that’s probably what stings most for Pelicans fans. They got great performances from all their key players, something that usually put them in the win column. The shot the ball just as well as GS, with 45/37% splits and 13 3PM. They even took care of the basketball, committing just 13 turnovers. The difference? They got crushed at the FT line. Just 7-9 for the Pelicans, that sure feels a lot different than 22-27. While this was not why they lost, it certainly doesn’t help when there is such an imbalance. Unfortunately they also didn’t get much from the bench, with no player scoring more than 5 points and the entire second unit combining to go 5-13.

Losing Mirotic late with his 6th foul really put any idea of a comeback to bed, and for a team that had been playing some of the best defense in the NBA, they’ve now given up  244 points in two games. This team can score, but not at that clip. If they can’t keep GS to the low 100s or low 110s then they have no shot. Unlike TOR, the Pelicans shouldn’t really panic. So the Warriors won both their games at home, big whoop. The Pelicans just have to win on the road eventually, it can still be Game 5, or if they’re luck a Game 7. Sure it would have been nice to steal one of the first two, but the Warriors were 4-0 at home coming in, so these results aren’t all that surprising.

And that’s it! You’re now caught up on everything that went down last night in the NBA. We’re back at it tonight, but have just one game on the schedule and it’s UTA/HOU. Hopefully like the NO/GS series Game 2 is a little more competitive, and as always if you get busy and can’t watch just check back in tomorrow morning and I’ll bring you up to speed on what you missed.