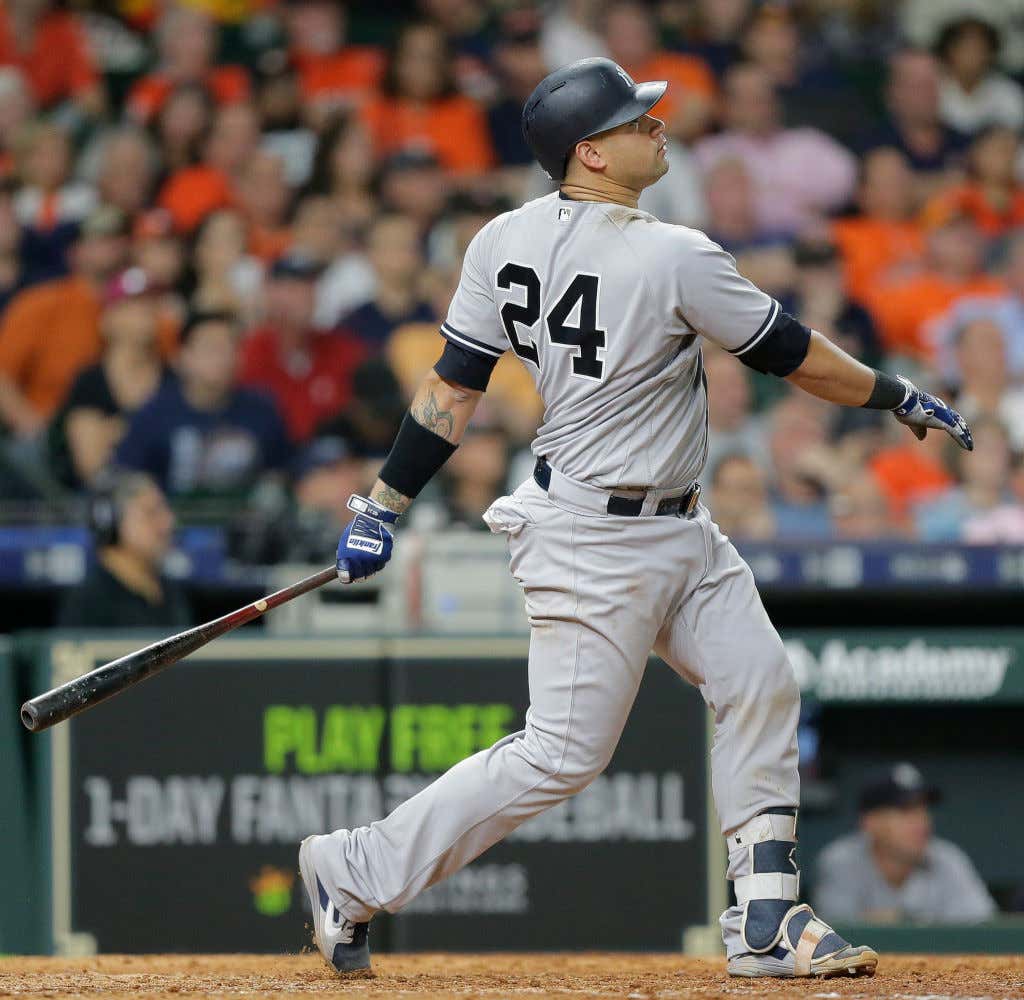 When you face Justin Verlander and he’s got everything going you’re probably going to lose 90% of the time. Tonight he was virtually unhittable going eight shutout innings, striking out 14, while walking no one. At times it felt like the Yankees had guys up at the plate swinging like they’ve never played baseball before. Well, the bullpen matched zeroes with Verlander the whole way and withstood his masterful start. In the 9th inning, closer Ken Giles came in for the second day in a row, but did not find the same success he did on Monday when he struck out the side.

Judge led off with a line drive single to right and Didi followed with an opposite field double to set up the Yankees with 2nd and 3rd and nobody out. Giancarlo failed to have his first big Yankees moment and struck out. That brought up Gary Sanchez with first base open and Hicks and Andujar to follow. It seemed like a no brainer move to not pitch to the Yankees hottest hitter, but I didn’t say the Astros were smart. They decided to try their luck and it blew up in their face magically.

Off the bat I thought it was going to be caught at the wall for a sac fly, but I should have known based off Gary’s pimp job. Just pure disgust in that 88 mph changeup down the middle as he tossed his bat to the side. Absolutely fucking demolished off the back wall in dead center to give the Yankees the lead. We call that in the biz a cock shot. After an Aaron Hicks single, Ken Giles’ night was over. He exited the game and incredibly screamed at himself as he walked off the mound. Including a furious punch to his OWN JAW.

I mean he might be concussed after that punch. Gary Sanchez’s home run caused a man to almost knock himself out in anger. I think it’s the sports video of the year so far. Just about as psychopath move as they come. Usually we get a baseball bat to the water cooler or sometimes a punch to the wall, but I don’t think I’ve ever seen someone punch themselves in the face out of anger. Unbelievable.

Besides Gary, the real MVPs of the game were the Yankees relievers. Jordan Montgomery started this one and lasted just one inning as he exited with left elbow tightness. Those are the three danger words that are usually followed with a trip to Dr. James Andrews’ doctors office. It would be a really tough blow in early May to be down a starting pitcher for the rest of the year. We’ll just have to wait and see how the MRI comes back, but Jordan said after the game he felt pain in it a few days ago. Dude speak up you moron. Hopefully he’s okay.

Domingo German stepped in to try and give this team some length and did just that. The right hander threw four shutout innings, giving up just four hits and striking out four. German certainly has the stuff to be a back end starter for the time being if Montgomery is sidelined for a little bit. I think this outing certainly earned him the next start when Jordan’s spot comes back around in the rotation. Obviously if Monty is out for the year, like some of us fear, that changes things, but we’ll worry about that when we find out the MRI results. Chad Green, Dellin Betances, David Robertson, and Aroldis Chapman each went an inning and were very good tonight. Yes, that includes Dellin who pitched the 7th in a scoreless game and struck out the side. He quietly hasn’t given up an earned run since April 13th which is obvious improvement from his early incompetence.

Overall the Yankees stole this baseball game. Justin Verlander became the only pitcher in MLB history to record 14 or more strikeouts while not walking a batter nor allowing a run against the Yankees. Verlander’s team somehow didn’t win the game despite his dominance. Hats off to the Yankees pen which is really starting to round into form over these last few weeks. Boone managed these unexpected 24 outs fairly well even though we all held our breathe when Dellin was in the game. I found myself at times asking how we beat this team three times in the playoffs last year, but just like in the ALCS they found a way. Such a big win for morale and I hope Monty only had a scare and is okay in the next few days.

P.S. I’m being told a seven win team won a baseball game up in Boston. Hope to see it on the blog tomorrow.