In December 2008, George Bush was in Iraq holding a press conference at the prime minister’s Baghdad palace. Suddenly, someone stood up and screamed,

“This is a farewell kiss from the Iraqi people, you dog! This is for the widows and orphans and all those killed in Iraq!”

The man proceeded to whip both of his shoes at the President, but Bush was smoother than Pernell “Sweet Pea” Whitaker and ducked out of harm’s way with a quickness.

Afterwards, when the attacker was taken into custody, Bush took it in stride saying,

The attacker, journalist Muntadhar al-Zaidi, would spend 9 months in Iraqi jail for his actions. But overnight he’d become a hero for many in the Arab world. They considered him a voice for their frustrations and anger over the destruction of the war.

The following year he was ranked the 3rd most powerful Arab according to the Arabian Business Power 100 List. In Tikrit, there was even a statue erected in his honor; a giant shoe complete with plants and a poem. 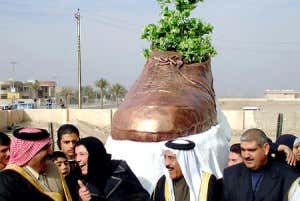 Now, almost a decade later, al-Zaidi is running for Parliament in Iraq, in the elections coming up on May 12th. If he wins and ever winds up doing a press conference in America, he’d best keep his eyes peeled for a little gray haired man, lurking in the shadows with shoes in-hand.