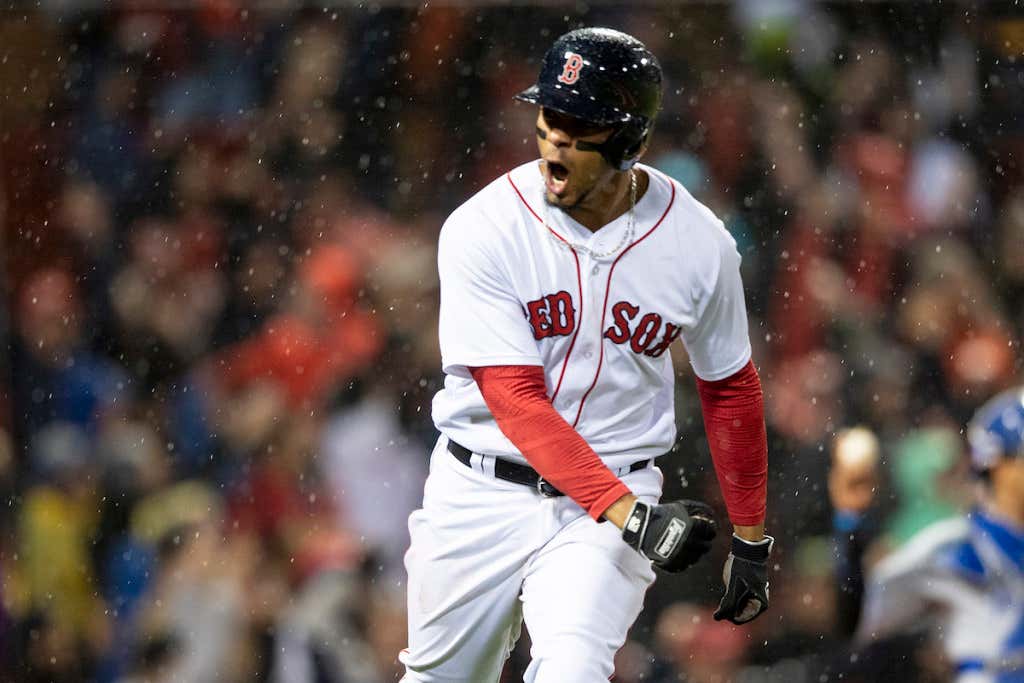 Not gonna lie, that picture made it move a little bit.

On a rainy night at Fenway Park, the Red Sox welcomed the worst team in the American League to Boston for a three-game set. The Royals are a far cry from the team that went to back-to-back World Series in 2014 and 2015, losing Eric Hosmer to the Padres and Lorenzo Cain to the Brewers in free agency this past winter. They also lost Mike Moustakas after he was hit by an Eduardo Rodriguez changeup in the first inning. Moustakas had been hitting .302 with a .914 OPS, so that was a huge blow.

Royals starter Jason Hammel and Rodriguez both looked pretty awful in this one, which could more than likely be pinned on the terrible playing conditions. Both starters had been pitching pretty well after disappointing season debuts, but carried ERAs in the twos since then entering Monday night. In the first inning, Rodriguez walked three batters, two of which forced in a run, hit a batter, and allowed a pair of hits. Boston was trailing 3-0 before they even got an at-bat.

Rodriguez only lasted four innings and was charged with five earned runs. And while Hammel might’ve lasted longer, I’m not sure that was a good thing. He allowed eight earned runs in four and two thirds innings, walking three batters of his own and allowed a pair of homers. The first one was to Mitch Moreland, a solo shot in the bottom of the second to make it a 3-1 game.

Moreland isn’t getting nearly enough praise for the start to the season that he’s had, and I’m almost positive it’s because he’s a man without an everyday job, technically. Hanley Ramirez is regarded as the team’s starting first baseman, despite playing 12 of his 25 games as Boston’s DH. JD Martinez is viewed as Boston’s DH, despite playing 13 of his 26 games in the outfield. Moreland, on the other hand, has only started in 14 of the 21 games he’s played in, all of which have been at first base.

After a 3-for-4 showing at the plate on Monday, Moreland is now hitting .305 with a .932 OPS. Moreland now holds the distinction of being the quietest .300-hitting, north of .900 OPS-having hitter in the Red Sox lineup. With the Red Sox having a starting outfield of Andrew Benintendi, Jackie Bradley Jr. and Mookie Betts, it goes without saying that Alex Cora has done a phenomenal job of still getting Martinez, Hanley and Moreland regular at-bats between the outfield, first base and DH. It’s paying off big time, considering the trio of Hanley, Martinez and Moreland are hitting a combined .327 with a .921 OPS.

The second home run allowed by Hammel might still be going, honestly. That would be the ball that Xander Bogaerts hit onto the Mass Pike for a grand slam, giving the Red Sox a 6-3 lead that they would continue to build on and never relinquish. One of the big concerns with Bogaerts since returning from suffering a small crack in the talus bone of his left ankle was that we’ve seen him either return from injury too soon, or try to play through an injury. In both cases, he was never the same player. In the three games since returning from his injury, Bogaerts is 7-for-13 with a double, a grand slam and six runs driven in. I’d say the ankle feels pretty good.

Big shout out to Hector Velazquez in this one. The right-hander was asked to fill a void in the Red Sox rotation when Boston entered the season with both Drew Pomeranz and Eduardo Rodriguez on the disabled list. The Red Sox won both of the games that he started, and since being asked to pitch out of the bullpen, Velazquez has allowed two earned runs in 11.2 innings of work, good for a 1.59 ERA. That includes two shutout, one-hit innings out of the bullpen on Monday with three strikeouts to earn himself the win, his fourth.

Tonight, it’s Sale Day. Chris Sale versus Jakob Junis. The 25-year-old starter for the Royals started out his 2018 season with back-to-back seven-inning, shutout performances against the Tigers and Mariners but has since allowed 12 earned runs in his last three starts over 18.1 innings, serving up EIGHT home runs, five of which came in his last time out against the White Sox. Sale wasn’t great his last time out either, but his worst day is some guys’ best day. He went six innings and allowed three earned runs with only four strikeouts against Toronto and gave up a pair of homers. Still good enough to get the win, though.

One last quick note — We can confirm that Tyler Thornburg is, in fact, a real person and his curveball is disgustingly filthy. He tossed a scoreless inning for the PawSox on Monday night, faced four batters and struck out three of them. Threw 16 pitches, 11 of them for strikes.