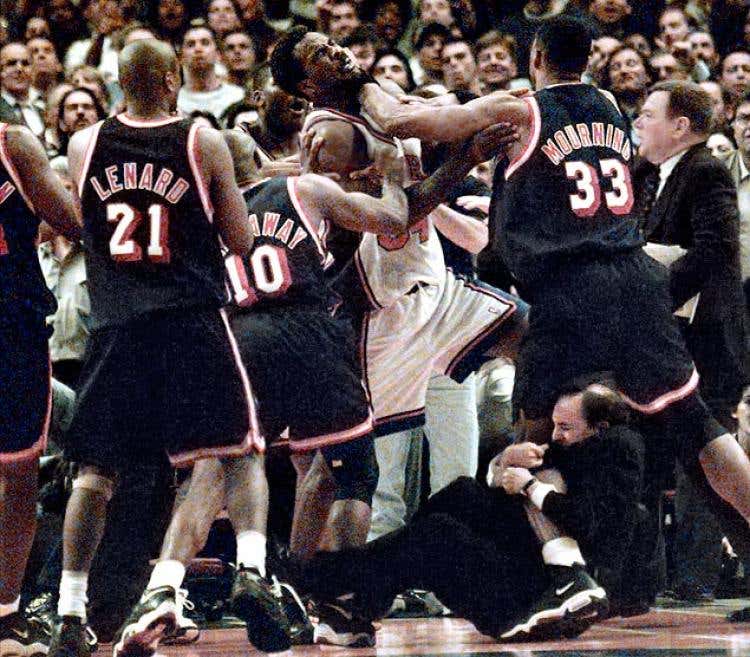 So as I was sitting on a flight today I was just randomly thinking of things while watching The Office. The first thing that popped in my mind was talking to Clem a couple weeks ago doing a Knicks therapy session and talking about the infamous fight back in 1998. Hey, that’s 20 years ago, I thought because I am a math wizard apparently. The moment I was back safely on the ground I looked up the exact date.

It was 20 years ago today and I’m here to talk about my feelings, because that’s what we have to do as Knicks fans. Now, this fight is the one that’s remembered more simply because of Van Gundy. But, really it brought back the anger from the 1997 playoffs where the Heat advanced on what I’d like to call bullshit. If you don’t remember, the Knicks and Heat also had a brawl that resulted in the suspensions of Patrick Ewing, Charlie Ward, Allan Houston, John Starks and Larry Johnson. The Heat won that series in seven, which is when I learned at 10 years old that the Knicks would forever be screwed. That was the team that was made to beat Jordan’s Bulls. Would it have happened? Probably not, but that was the team set up to do that.

Fast forward a year and the two teams are playing in the first round of the playoffs. Well, here’s what happened:

It led to one of the more memorable pictures with JVG hanging on Zo’s leg and just pure anarchy on the court for a few moments. Now, what was also low key hilarious about this were the missed punches. However, if one of those landed that other dude was going down. They were throwing some haymakers, but just swinging absolutely wildly. I do also love the moment Oak steps into the middle everything calms down.

For Knicks fans though, this really just signaled the end of an era. Following the elimination to the Pacers in the next round, the Knicks traded John Starks and Charles Oakley. Ewing was with the Knicks until 2000, but this team was starting to turn into Houston and Johnson’s team. For me personally, it ended the first group that I truly loved. John Starks, Charles Oakley, Patrick Ewing, Anthony Mason, Greg Anthony, Derek Harper, Hubert Davis, etc., really introduced me to NBA basketball and a fandom that I’ve never once questioned.

So now 20 years later here we are. The Knicks don’t really have a rival like they did back then simply because they aren’t good enough to have one. That’s all I want as a Knicks fan. I want the franchise to be good enough to where there’s a rivalry. There’s a long way to go still, but we can have hope. Until then: