The Baltimore Orioles continued to put the O in Orioles as they were beaten by the Minnesota Twins 4-2 at the Metrodome, falling to 0-21 on the season. The Orioles had come into the year with two straight losing seasons and fired Manager Cal Ripken Sr. after just six games, and continued losing under Frank Robinson. The O’s would finally win a day later against the Chicago White Sox 9-0.

From the start of divisional play in 1969, it seemed that the Baltimore Orioles were in contention nearly every season in the American League East. After arriving in Baltimore from St. Louis, the Orioles erased some early growing pains and became a contender in the 1960’s. In 1966, the Orioles won the American League Pennant and upset the Los Angeles Dodgers in the World Series, after Frank Robinson won the Triple Crown after being acquired from the Cincinnati Reds.

The Orioles finished with a disappointing record of 76-85 in 1967, but bounced back in 1968 and went into a long sustained period of excellence, winning three straight pennants and another World Series between 1969-1971 under their feisty manager, Earl Weaver. After another World Series in 1979, Baltimore remained a perennial contender into the 1980’s. After Weaver stepped down in 1982, the Orioles won a third World Championship in 1983, thanks to the arrival of new stars like Cal Ripken Jr.

After the 1983 World Series, the Orioles began slipping as Weaver returned in 1985 to help turn things around, but the slide continued as they finished last in 1986, suffering their first losing season in 19 years. In 1987 longtime coach, Cal Ripken Sr. took over as manager with his sons Cal Jr. and Bill playing in the middle of the diamond. The 1987 Orioles were not a good team, as they finished 67-95.

Entering the 1988 season, the Orioles were hardly a favorite to win the Eastern Division, but nobody could have expected their horrific start. The nightmare began on Opening Day when the Orioles were hammered by the Milwaukee Brewers 12-0 at Memorial Stadium. The Brewers would also beat the Orioles 3-1 in the second game of the season. The Orioles first road game came in Cleveland as they were blanked by Scott Bailes and the Indians 3-0. The Tribe would win four straight over the Orioles would lose all four games in Cleveland as they were outscored 28-6.

At 0-6, the Orioles decided to make a change firing Cal Ripken Jr. in favor of Frank Robinson. A decade earlier, Frank Robinson was the first African American manager in the history of the majors with the Indians in 1975 and later became the first black manager in the National League with the San Francisco Giants. However, since Robinson was fired in 1984 there had not been any African American managers on the Major League level.

The move did not help the Orioles on the field as they lost Robinson’s first game at the helm 6-1 at Memorial Stadium. After three straight losses to the Royals, the Orioles struggles continued against the Indians as they dropped to 0-12 with three straight losses. This included a gut-wrenching 1-0 loss in 11 innings, as they left the bases loaded with a chance to end their skid. In Milwaukee, the Orioles dropped to 0-13, with a 9-5 loss equaling the worst start in MLB history at 0-13 by the 1904 Washington Senators and 1920 Detroit Tigers. The Orioles had the record to themselves after an 8-6 loss to the Brewers. At 15 games, the Orioles had the longest losing streak since moving to Baltimore with a 7-1 loss to the Brewers. The Orioles reached 0-16 with an embarrassing 13-1 loss in Kansas City, while Bo Jackson hit a walk-off home run to lead the Royals to a 4-3 win. The streak reached 20 setting the record for the longest losing streak in American League history as a three-game swept had the birds sitting at 0-21.

The misery would finally end on a Friday Night at Comiskey Park when the Orioles beat the Chicago White Sox 9-0 as Mark Williamson and Dave Schmidt combined to throw a four-hit shutout the Orioles offense was led by Eddie Murray and Cal Ripken Jr. who each had home runs as Jack McDowell got the loss for Chicago. The Orioles would lose the following night to finish April with a record of 1-22.

Nobody was more relieved to see the Orioles win a game than Bob Rivers a DJ at WIYY 97.9 FM, who midway through the streak vowed to remain on the air until the Orioles won a game, this led to him staying on the air 258 straight hours, sleeping only when the records were playing.

The Orioles would continue to struggle throughout the season as the finished with a record of 54-107 the worst season in Baltimore. Rumors of trades swirled all season as Cal Ripken Jr. was said to be on the trading block, with a possible trade to the New York Mets after he expressed anger of his father’s firing. The Orioles would turn things around in 1989, as they challenged for the Eastern Division title at 87-75. 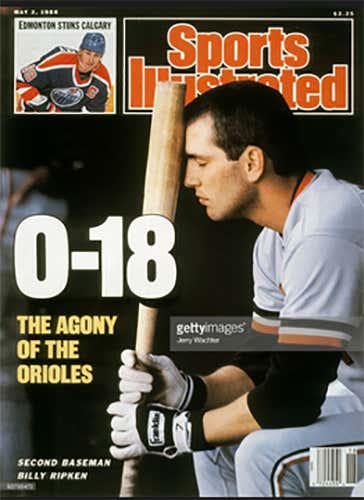