ORIGINAL POST DATE: April 27th, 2018 – Reposted for all who caught the film this weekend!

***I dive deep into spoilers for ‘Avengers: Infinity War’ in this blog, but I’ve provided a big ol’ warning before I do, so you’re safe to read this if you haven’t seen the movie yet! Just make sure you don’t scroll past the big yellow sign, and when you’re finished reading the spoiler-free portion of the blog, GET OFF THE INTERNET UNTIL YOU’VE EXPERIENCED ‘INFINITY WAR’ FOR YOURSELF! You’d rather be safe than sorry. I promise!*** 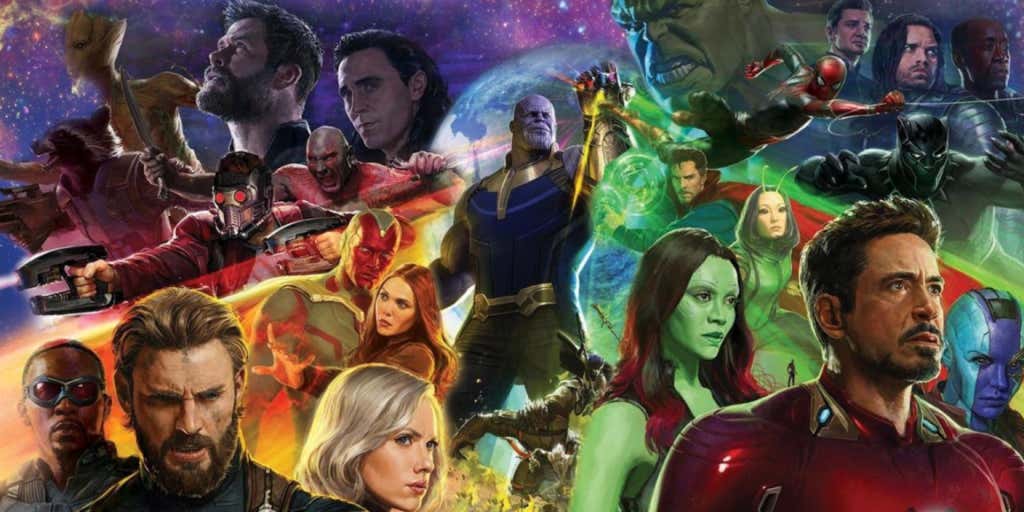 I remember the night I saw the first ‘Avengers’ movie like it was yesterday. At that point, in May of 2012, there were only five installments to the Marvel Cinematic Universe (‘Iron Man’, ‘The Incredible Hulk’, ‘Iron Man 2′, ‘Thor’, and ‘Captain America: The First Avenger’), but still, it was almost unfathomable that we’d get to see the heroes from all of those films on-screen together. Nothing like that was ever even attempted before, especially on the scale that this was.

You couldn’t go anywhere without overhearing a conversation about what would happen in the flick – which comics they’d pull arcs from, what the outcome of the Thor vs Hulk fight would be, which Avengers would die, would any Avengers would make their debut – all topics traditionally only discussed in comic book stores were now commonplace on the street, in grocery stores, at restaurants, I’m talking everywhere. All of a sudden the geeky adventures I grew up worshipping were as mainstream as could be, and everyone had questions for me based on my years of preparation. It was awesome.

To this very day I look back on that month or two leading up to the ‘Avengers’ release as one of the fondest periods of my life, and luckily, I could always throw on the ‘Avengers Assemble’ motion picture soundtrack for a quick nostalgia trip back to that time.

Of course, the movie itself lived up to all of our super high expectations, and provided its audience with the most fun, lively theatergoing experience imaginable. There were so many cheer-worthy moments, laugh out loud funny jokes, and even some emotional beats that tugged at our heartstrings…’The Avengers’ really was everything we thought it could be and more. As my midnight showing emptied out though, there was only one thing on everyone’s minds: Thanos.

The post-credits scene for the film (seen above) marked the first cinematic appearance of the most treacherous villain in the history of Marvel Comics, and everyone, myself included, lost their collective minds.

“Does this mean…could it be…no, no way…wait…are they really going to make a fucking Infinity War movie?! It IS the essential Thanos’ story! But they’d need so many other heroes for that. No chance!”

Chance is actually a great word to describe what Marvel has done to a tee over the past decade. They’ve taken a chance, and they’ve built the largest inter-connected cinematic universe of all time featuring a bunch of heroes reckoned “too obscure” to ever grace the silver screen, who now dominate the box office. Heroes like Black Panther. Heroes like the Guardians of the Galaxy. Heroes like Doctor Strange, and even Ant-Man. They’ve gotten the rights to a hero deemed “unattainable” from an outside movie studio. A hero named Spider-Man. And every step of the way, they have been slowly but surely building to one event in particular…an event where each and every hero in their now-gargantuan arsenal would have to band together for even the slightest chance of saving the universe and humanity as we know it…and an event widely regarded as the most ambitious crossover of our lifetime: the Infinity War.

Last night, the film was released worldwide, and honestly…it was fucking perfect in every way.

I just told you guys about how I went into the original ‘Avengers’ with very high expectations and it wound up exceeding them, right? Remember that? Well, I went into ‘Infinity War’ with much higher expectations than that, and not only did it exceed them…it blew them out of the water. This movie is undoubtably the best installment to the Marvel Cinematic Universe out of all nineteen films, the best comic book movie since 2008’s ‘The Dark Knight’, and easily one of my favorite movies I have ever seen. That ain’t recency bias or hyperbole, either, folks. I guarantee you that.

‘Infinity War’ is truly as good a film as the genre has ever seen, which is doubly impressive given that on paper, it shouldn’t work as a movie in the slightest. The Russo Brothers were tasked with giving twenty-one separate heroes each their appropriate screen time, splitting them up into four or five factions and making sure none of their subplots dragged or felt inferior to the others, telling Thanos’ entire origin story while following him on his quest to find all of the Infinity Stones (also while explaining how they work without getting too exposition-y), balancing Marvel’s trademark humor with the darkest moments this universe has ever seen, and paying tribute to the film’s eighteen predecessors. The target they had to hit to make this work was incredibly small. We’re talking smaller-than-Ant-Man small, yet somehow, someway, they hit it.

Focusing-in on our villain for a second…MAN was he everything I imagined he’d be and then some! Josh Brolin’s calm, brooding demeanor fit Thanos and his dialogue so well that I feel like that dude was specifically put on this Earth to portray The Mad Titan himself. He was such a treat to watch every time he was on screen, and I really hope his performance gets the recognition it deserves alongside Andy Serkis’ resume as one of the best motion-capture roles ever. He couldn’t have done it without the script he was given as well, obviously, so credit to the Russo Brothers once again. They lifted him straight outta the pages of the Infinity War comic and didn’t allow ANY characteristic to be lost in translation. It seems like the MCU has finally carved out four villains worthy of a Mount Rushmore in Loki, Helmut Zemo, Killmonger, and now Thanos.

Overall, without spoiling anything, I’ll just say this – ‘Avengers: Infinity War’ is a wonderful roller coaster of a film that’ll take you to the highest of highs, and the lowest of lows, its two-hour-forty-minute runtime flying by in a flash. See the movie this weekend if possible, because audiences will be engaged, people will be going nuts for the flick’s thrills, gasping at the shocked, and ooo-ing and ahh-ing at everything in between. ‘Infinity War’ is a beautiful celebration of the beauty of the past decade in the MCU, and it’s a movie you’ll never forget watching for the very first time.

Now, please enjoy my incredibly sleep-deprived tweets from last night as I was still processing what I had just seen. 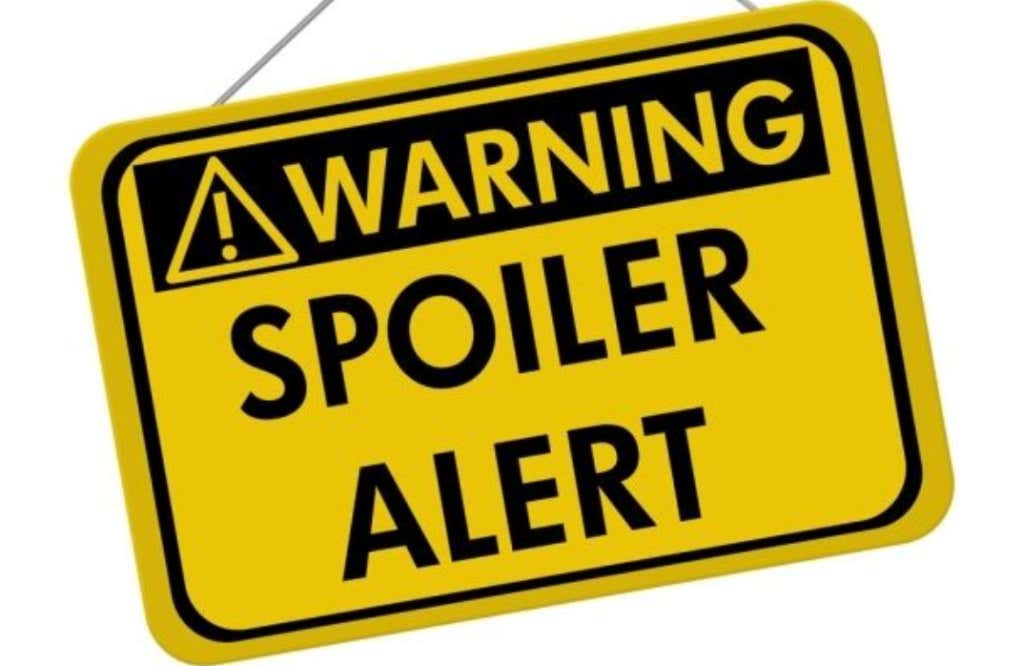 Alright, so here’s the deal with my spoiler section here: I’m going to talk about one specific spoiler…the big, major spoiler, and everything else is going to be held back juuuuust a few days for a special one-off podcast with Clem, Fran, and Devlin. Hope that’s cool with all of you!

Oh…my…god. He did it. He fucking snapped. Thanos snapped and killed half of the universe’s population. There was a part of me going into this movie hoping he would, I’ll be honest. It’s hard to make an Infinity War movie without including the most famous panels from the source material… 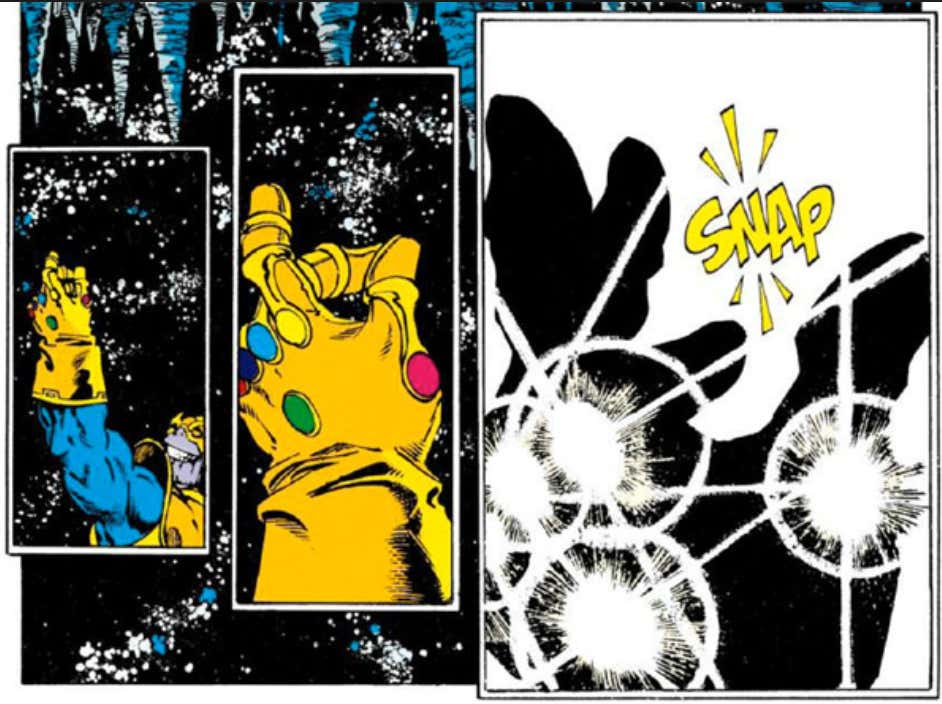 …but when it happened, my heart stopped beating and I simultaneously felt like I was going to throw up. It was an emotion I’m not quite sure I’ve ever felt while watching a movie. Thanos was obviously holding the time stone at the time, so I knew there was no way this could be fixed. Not in this movie, at least. The flood gates were now open, and Avengers were about to start dropping like flies. And there was nothing anybody could do to stop it from happening.

All dead. Dead. D-E-A-D. DEAD! I had to sit there, in my fucking seat, and watch teenage Peter Parker cry in Tony Stark’s arms as he died, telling him, “Mr. Stark, I don’t wanna go. I don’t wanna go Mr. Stark.”. I watched Rocket lose Groot again. Hell, I watched mothafuckin’ King T’Challa vanish into thin air. I thought we were all good when Scarlett Witch put her love to the side for the sake of the universe and destroyed the Mind Stone in Vision’s forehead, killing him. I thought we were all good when Thor came down from the clouds and stabbed Thanos through the fucking chest with his Stormbreaker axe. But no, we weren’t all good. Either of those times.

I feel like Kevin Feige just fucked us all in our asses for the last ten years of “Marvel doesn’t have the balls to kill any characters!” complaints. Homeboy said, “OH YEAAAAHHHHHHH?! WE DON’T HAVE THE BALLS?! HOW ABOUT WE KILL EVERYONE YOU’VE EVER LOVED AND MAKE YOU AND THEIR LOVED ONES WATCH AS THEY SUFFER?!”

So yeah, “They’re not really dead Robbie, reeeeelax, they’ll all be back in the next one”, isn’t really making me feel much better right now. The anguish and pain in my heart is still there, and it may be getting stronger by the second. Just an absolutely mind-blowing scene.

I guess that’s how people felt leaving ‘Empire Strikes Back’ in ’80, though, huh?