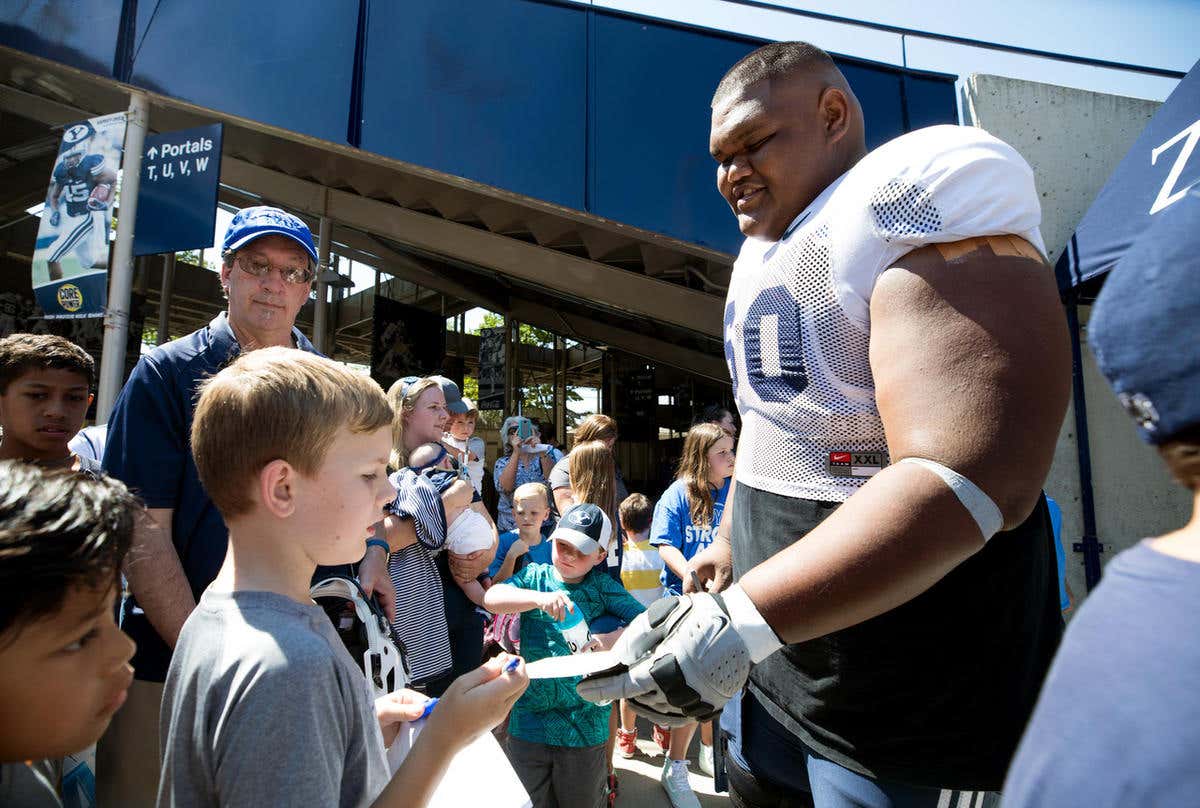 Back when Bronco Mendenhall was BYU’s coach, he signed a 6’7, 410-pound kid from Tonga, who had never played football before, based off of a pick-up basketball game an assistant coach saw him play on a missionary trip two years prior (this is the most Mormon tidbit ever). 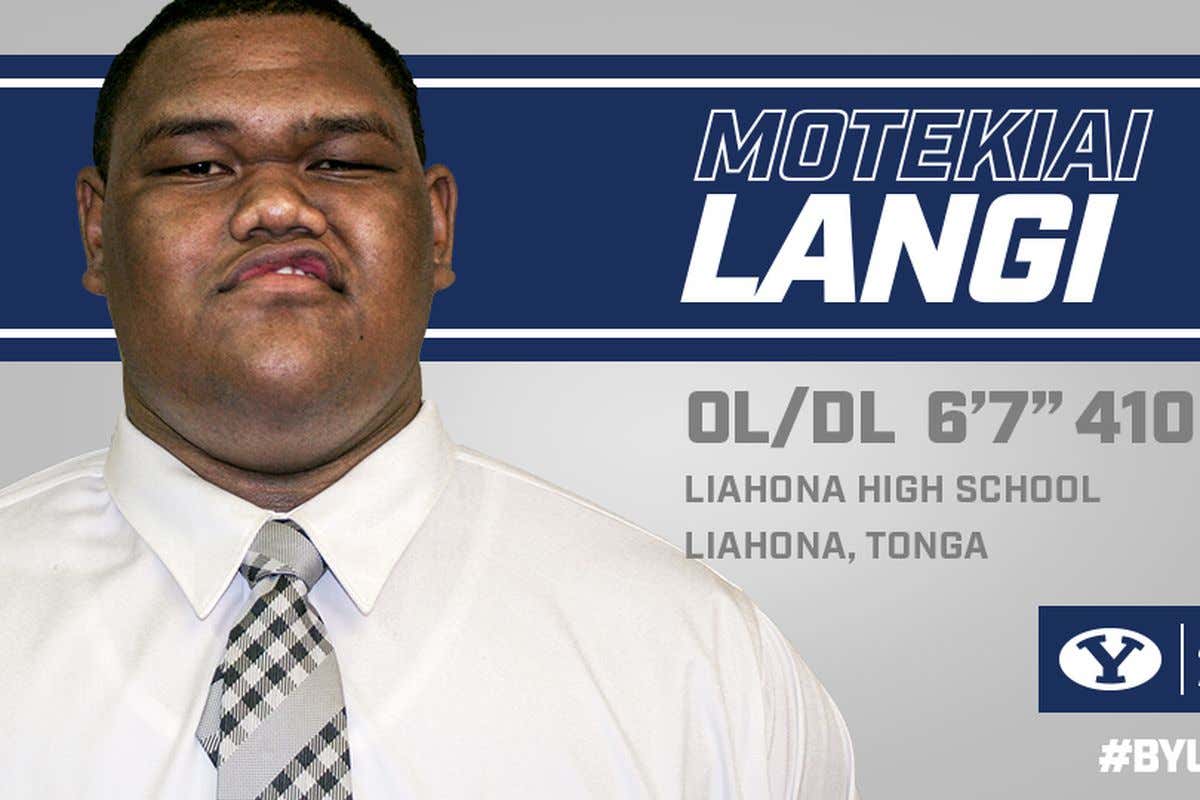 Herald Extra-Cougar gymnastics coach Guard Young decided he wanted his gymnasts to have their mental toughness tested, so he started inviting athletes from other programs to come heckle his girls as they practiced their routines.

“One of the funnest things we’ve done this year was we brought in sports teams to cheer us on and to heckle us on the balance beam,” Young said last week. “We brought in some of the football players and those guys are just nothing but clowns.”

As part of the program, BYU football players took a turn attempting to distract the gymnasts.

“It was weird at first because we didn’t want to tear them down,” Cougar sophomore defensive lineman Motekiai Langi said earlier this week. “But their coach was like, ‘Just go. They need it to be ready for the crowd.’ We just had fun with it.”

Guard Young is such a bizarre name that the only way it makes sense is it’s a Morman’s name. How many Young’s are there in the Mormon religion?! Is Brigham Young a JV version of Genghis Khan?

Building mental toughness for Mormon’s must be tough. Bringing in others Mormons to heckle your gymnastics team full of Mormon’s just doesn’t sound like the greatest idea to me. It must accomplish nothing. Also, what crowd does the BYU gymnastics team have to get ready for?!?

It was probably inevitable that — after the gymnastics practice came to an end — the fun-loving BYU football players would try out the gymnastics equipment.

The gymnasts have a foam pit they use to provide a soft landing while they practice their tumbling. It didn’t take long for the football players to start jumping in.

“After they heckled the girls, they saw the foam pit and they couldn’t resist,” Young said. “They all dove in.”

But when Langi (listed at 6-foot-7, 397 pounds) plunged into the pit, the Cougars suddenly discovered a problem.

“We all thought it was pretty funny until we realized we couldn’t get him out,” Young said. “Then I was like, seriously, how do you get someone like that out of the foam pit? We got him out, but it took some effort and some football players to help. Thankfully I didn’t get a phone call from (head football coach Kalani Sitake) about it. We kept him safe.”

Oh no, look at this thing: 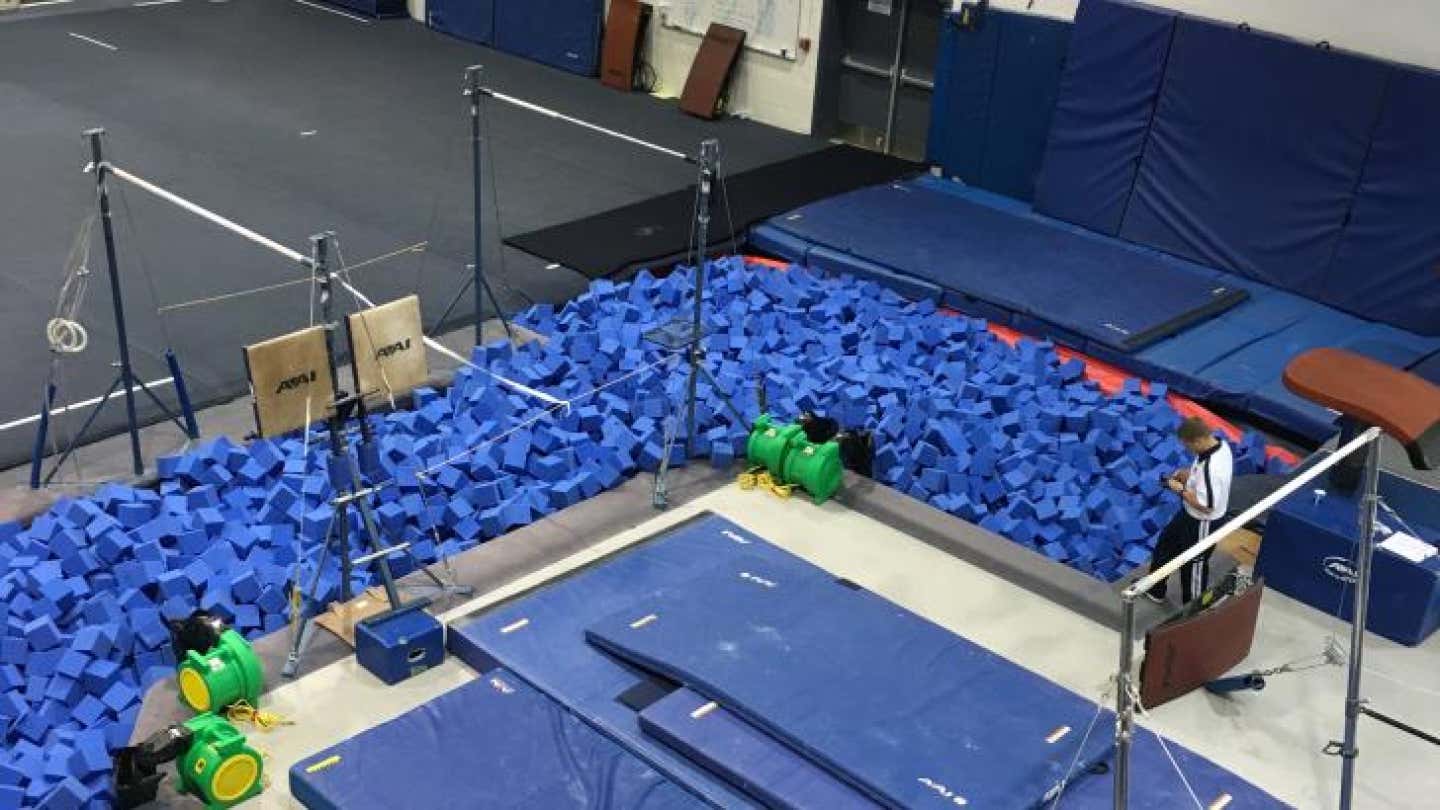 And look at Motekiai Langi, nicknamed the Tonga Truck (A+ nickname):

“It was hilarious,” van Mierlo said. “He struggled to get out because it sucks you in. It was definitely a sight.”

It wouldn’t have been easy for the diminutive gymnasts — who are all between 5-foot and 5-foot-6 — to get Langi out of the foam pit by themselves but fortunately other Cougar football players were there.

Is there a reason there isn’t a photo of Langi and the gymnastics team, because I need a photo of the Tonga Truck and that team.

“It’s gotten down to the 390s now,” Langi said. “Eventually I want to be down in the 350s or 340s. It was hard at first, but seeing the results has been motivating. It’s addicting.” 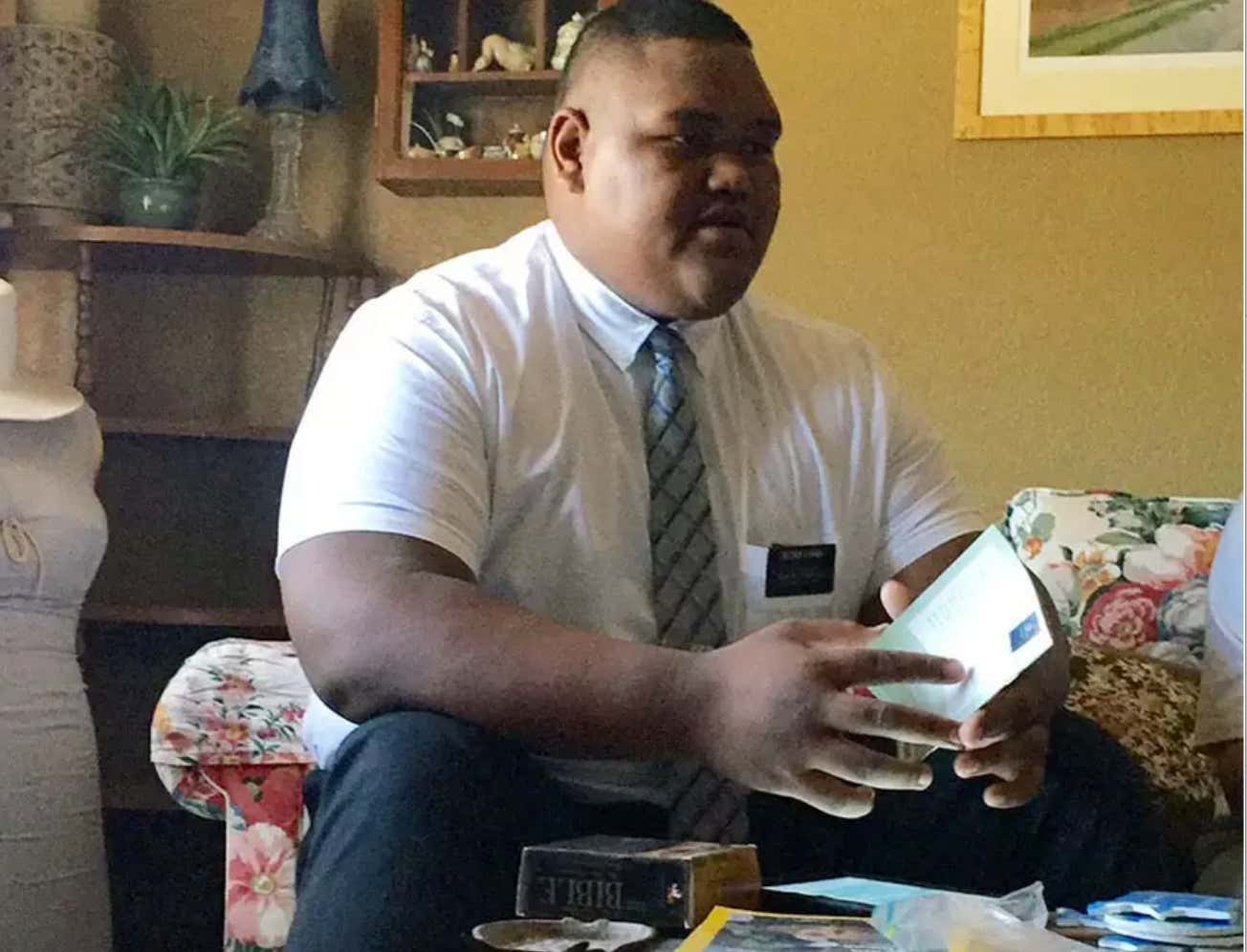 That is the only man who could convert me to being a Mormon. 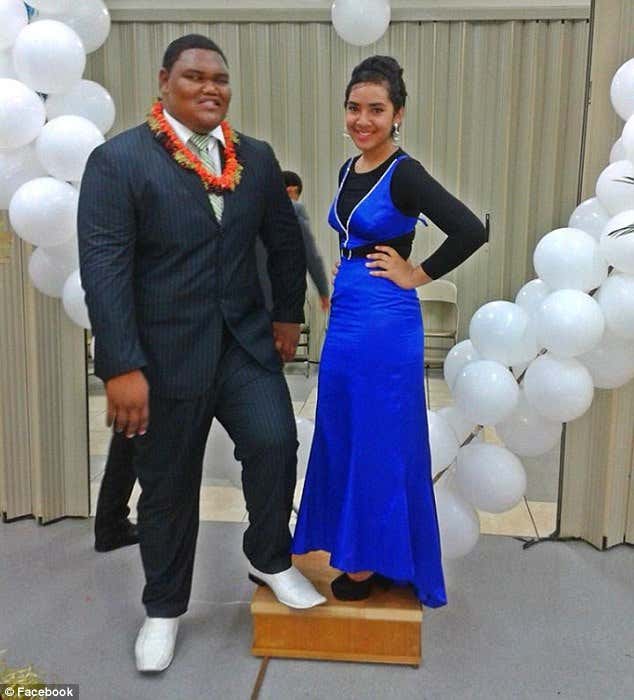 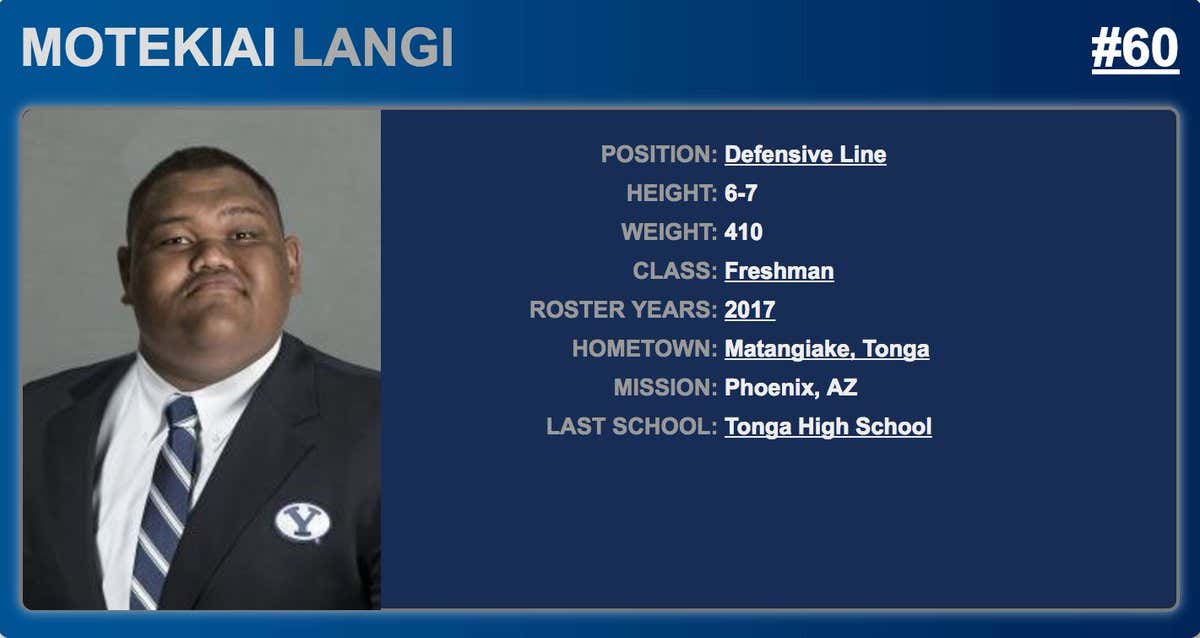