The New York Yankees host the Chicago White Sox in their home opener, raising their 21st World Championship Banner. On hand to raise the flag is Mickey Mantle and Roger Maris. It is the first time Maris returned to Yankee Stadium since he was traded to the St. Louis Cardinals after the 1966 season. The Yankees would win the game 4-2, as fans shower the field with Reggie Bars.

Roger Maris was the star Yankee fans refused to like. Despite two MVP awards and a record 61 home runs in 1961, fans in New York never warmed up Maris who was often viewed as distant by the press. After he was traded to the St. Louis Cardinals in 1966, Maris vowed never to return to Yankee Stadium. After retiring, Maris was set up as beer distributer by Anheuser Busch, owner of the Cardinals in Gainesville, Florida. Seeking to mend fences, George Steinbrenner, owner of the Yankees agreed to help build a high school field, in Roger Maris’ adopted hometown by donating $25,000. A decade after being routinely booed by Yankee fans, Maris was finally embraced as he and Mickey Mantle helped raise the banner for the 1977 World Series championship.

The Yankees started the 1978 season on the road, losing four of their first five games against the Texas Rangers and Milwaukee Brewers. Manager Billy Martin tabbed Ron Guidry to start to home opener while Wilbur Wood got the start for the White Sox managed by Paul Richards. This was the first game for the Yankees and Reggie Jackson since he hit three home runs in Game 6 of the World Series. In the first inning, Jackson came to the plate with two runners on and homered to give the Yankees a 3-0 lead. As Reggie Jackson circled the bases fans tossed Reggie Bars onto the field in celebration. The Yankees would win the game 4-2, as Guidry earned the first of his 25 wins on the season. 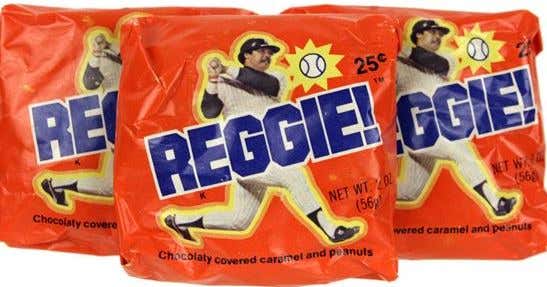 The Reggie Bars that were wrapped in a distinctive orange wrapper were given out to fans prior to the game. Thinking that Baby Ruth bars were named after Babe Ruth, Reggie Jackson once remarked if I played in New York they would name a candy bar after me. After his heroics in October, the Curtiss Candy Company decided a candy bar named after Jackson was a good idea. The Reggie Bar was a block of caramel and peanuts covered in chocolate. The candy came in an orange wrapper with Reggie Jackson swinging his bat. The Reggie Bar was popular at first but soon faded away and were discontinued when Reggie Jackson left the Yankees to sign with the California Angels in 1982. They would make a brief comeback in 1993, the year Reggie Jackson went into the Hall of Fame.