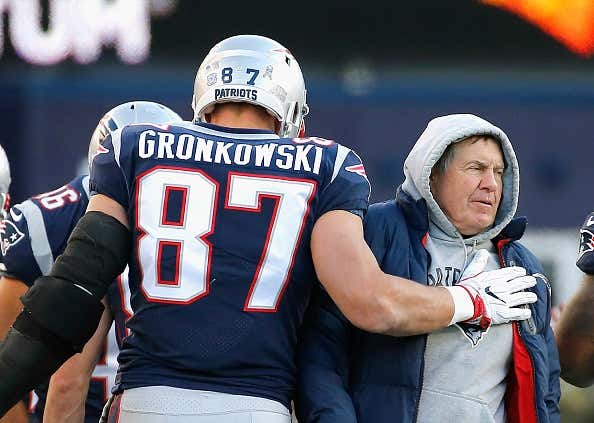 Boston Herald –  Of late, [Rob] Gronkowski has been working out at TB12, continuing his mission with trainer Alex Guerrero. After the 28-year-old’s multitude of injuries, including a third back surgery, he last year decided he would put his faith in Tom Brady’s body coach, who focused on getting the tight end more pliable. …

Guerrero and his treatment of Patriots players beyond Brady is a polarizing subject in and around Patriot Place. Everything seems to be up for debate.

Plus, Gronkowski’s quest for pliability may have even stirred up some of the reported friction between Bill Belichick and his star tight end.

At one point early last season, the Hoodie chastised Gronk in front of the players for being a TB12 client, according to a source. So maybe that was Belichick’s not-so-subtle way of trying to keep everyone from jumping ship on the team’s training staff.

And so it is in the Offseason of Our Discontent. Another day, another report of bad blood in what I guess must be the most dysfunctional, divided and mutually loathing group of people ever assembled. The 2017 Patriots were apparently Reservoir Dogs in cleats. And as bothered as we all are by the loss to the Eagles, I guess at this point we should just be grateful they didn’t all end up shooting each other in a warehouse.

I’m not disputing the truth of this latest rumor of family in-fighting. Just it’s significance. Bill Belichick ridiculed one of his star players in front of the whole team? The hell you say! He’s allowed to do that? Has he ever done it before? Oh, right. He’s been doing it nonstop throughout his entire storied and impossibly successful career.

I’m sure Gronk doesn’t appreciate it. But if Belchick bitches you out in front of your peers you’re entitled to feel any feeling you want, just not special. Not singled out. He talked that way to Harry Carson and Everson Walls and Eric Turner and Vinny Testaverde and Brian Cox and Tedy Bruschi and Rodney Harrison. And Tom Brady. It worked out pretty well then and he’s not about to stop in 2018. If guys don’t like it, there are plenty of other coaches in the league who would die before they’d call out one of “their guys.” Go play for one of them. That is, if they didn’t wash out of the league and are now reduced to doing “ReX’s and O’s” segments on NFL Countdown. But the bottom line is that most adults value honesty from their bosses above all else. And no one who as ever worked for Belichick claimed they didn’t know where they stood with him. Based on everything I believe to be true about Gronk as a guy and a competitor, I have to believe he’s in that category too.

Which is not to say the friction between the Pats and the Guerrero clients isn’t real. I’m sure it is. But there ‘s no reason to think it can’t be worked out. It’s not like Guerrero is treating people with crystals and Dreamcatchers or the Patriots medical staff is running a Civil War surgeon’s tent with everyone tripping over the amputated limbs. Athletes and teams are at odds over treatment methods all the time and they don’t all end up like Martellus Bennett and the Packers did. Brady is the man Guerrero’s method is named after. His post-football career is going to be based on it. There’s been speculation in the media he’d retire before he’d give into Belichick on the issue.  And where was he this past weekend? Working out in the Patriots practice bubble with Julian Edelman, that’s where. And now we’re hearing that Malcolm Mitchell is working out with Guerrero as well. Do any of us believe the Pats will dump a young, promising wideout because they don’t like the workout trainer he uses in his free time?

So yeah, it’s just more of the same overreaction we’ve been dealing with since the ESPN hit piece landed in early January. And it will continue every day until OTAs, minicamps and training camp starts. At which time we’ll all see that whatever beefs the Patriots major players have had, they still share the common bond of being obsessed with winning a sixth ring. And no hurt feelings will get in the way. #WeStandUnited. Still.